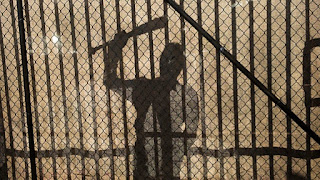 The Walking Dead doesn't seem to realize this. They love their 90 minute episodes. They think this makes the episodes better, grander, more special. It doesn't.

You want to know what happened in this episode? Negan asserted his dominance over Alexandra (and Rick specifically). That's really it. Negan came in, bullied everyone, got what he wanted and Rick just acquiesced and begged everyone in Alexandria to do the same. That's all. You don't need 90 minutes for that.

The Walking Dead loves itself. I suppose you should love what you're creating. Heck, given their ratings, I can see why they feel their self-love is valid. But this show is not as good as they think. We don't need 90 minute episodes. We especially don't need them when so little happen.

The Walking Dead did the same thing last year. I'm starting to get the feeling that the Walking Dead is so scared about these "quiet" episodes that they make them 90 minutes long so people feel like they're more special. More artsy, or something. Whatever it is, it's false gravitas.

Yes, I think this episode was necessary. It wasn't even bad. It established a new status quo. It showed us how much power Negan now wields over Rick and, by extension, Alexandria. Negan is the new big, bad guy we see him be big and bad. Also, we now see Rick in a position we've never seen him before: completely subservient.

If that's what this episode wanted to show then mission accomplished. And that's not bad. Quiet episodes are not bad. They give the audience a bit of a breather. The only downside is they can be a tad slow plot-wise. But it's usually not too bad. You know how you make that downside worse? Making the episode longer.

Other Thoughts:
What is Michonne doing with those guns? Target practice? Why does she still need to practice? I thought everyone could head shot everything after a day's worth of practice? Is Rick mad she stole the guns?

Negan strolling up to the gates of Alexandria unprotected seems risky.

Whatever happened to the Wolves?

So, is Daryl brainwashed or playing along?

They tried to make Dwight sympathetic last episode but he's not in this episode. His grudge with Daryl still confuses me.

Carl should have just shot Negan when he has the chance. Why not?

Of course, instead, Carl just makes Negan realize he needs to take all of Alexandria's guns. Seven seasons and Carl is still screwing things up.

What did Michonne come across that was burning?

The sexual tension between Rick and Negan is a little over the top. Just make out already!
Newer Post Older Post Home
Posted by Dr. Bitz at 5:53 PM