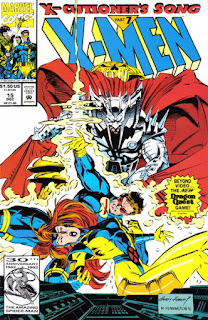 In a Nutshell
The X-Men defeat the MLF as Stryfe confronts Apocalypse.

Plot
Gambit & Quicksilver are saved from Reaper by Havok & Psylocke, and though Boom-Boom's jaw is broken and Rogue is blinded, the X-Men successfully route the MLF, with Storm hoping they'll be able to lead them to Stryfe. Meanwhile, Bishop, Wolverine & Cable escape from Department K's force by teleporting to Cable's space station, while Beast & Moira continue struggling to treat Xavier. Elsewhere, Stryfe continues to torment Cyclops & Jean Grey, before having Zero teleport him to where Apocalypse is recovering. After easily defeating the Dark Riders guarding him, Stryfe confronts Apocalypse and declares that he is going to kill him.

Firsts and Other Notables
With the Mutant Liberation Front rather soundly defeated by the X-Men and X-Factor (and Cannonball & Boom-Boom), this effectively marks the end of their original incarnation as a group of mutants led by Stryfe. A handful (including Wildside, Reaper, Forearm & Tempo) will pop up as part of a new MLF led by Reignfire in X-Force post-"Fatal Attractions", and a few of the other members will make a handful of appearances after this issue (notably Rusty & Skids, as well as Zero). But this is the last appearance to date of Strobe, for what that's worth, and the end of the team's tenure as lackeys of Stryfe.

More baby-related hints at Stryfe's origin, as Stryfe force feeds Cyclops, asking if that's how you nurse a child (it's not). 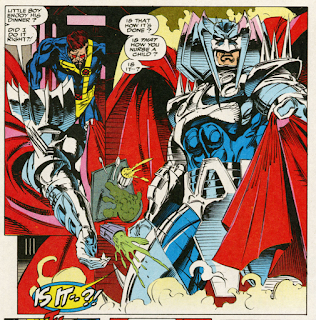 Stryfe makes short work of the Dark Riders guarding Apocalypse, an act which will, in part, lead to them switching allegiances in the next chapter. 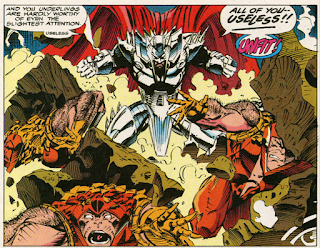 Later, as Apocalypse emerges from his healing cocoon, Stryfe declares his condition to be childlike, telling him to come to Stryfe as Stryfe came to Apocalypse (just as Nathan Christopher was brought into a future ruled by Apocalypse as a child). 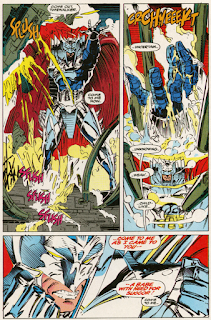 Stryfe also refers to himself as the "demon of tomorrow" who has come for retribution from the "devil of yesterday" who haunts his tomorrows, more clues regarding Stryfe's time-traveling nature and his relationship with Apocalypse.

The Mutant Liberation Front is featured on this issue's trading card. 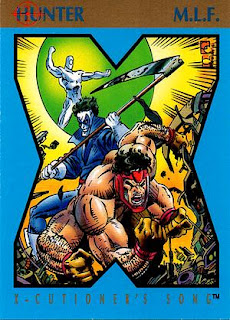 Boom-Boom pokes fun at Psylocke being snuck up on by Forearm, despite her ninja training, which might be Nicieza poking fun at the art. 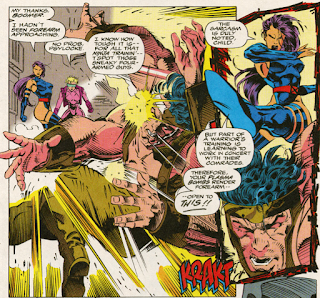 It turns out Dragoness wings are mechanical, making her bio-electric stings her only innate power. 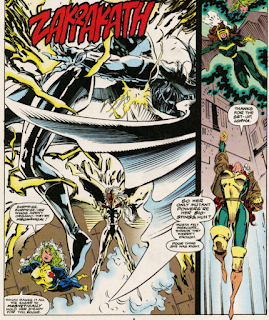 MLFer Thumbelina and her brother Slab, of the Nasty Boys, rescued by the MLF in X-Factor #77, appear briefly in this issue. Nicieza wrings a little bit of appreciated characterization out of Thumbelina by establishing that she considered Dragoness her only friend in the MLF.

Rusy & Skids also appear, and it's heavily suggested that they've been brainwashed by Stryfe into being part of the MLF (something which will later be confirmed). 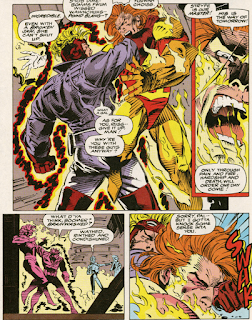 It's noted that without Stryfe to lead them or Zero to teleport them away when they start to lose, the MLF is not terribly effective. 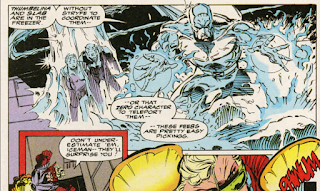 Boom-Boom's jaw is broken this issue, joining Polaris in the "early 90s oddly-specific injury" club; like Polaris, it'll be a few issues before she's back to normal.

Similarly, Rogue is blinded by Strobe, and while her sight will return, it'll take a few issues. 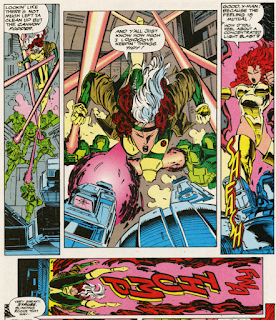 Iceman tries to ask Archangel about killing Kamikaze, but ultimately lets it go, as will Nicieza and Lobdell for the most part.

In a nice bit of camaraderie, as the combined X-teams mop up the MLF, Cannonball notes they should have done this months ago, to which Havok responds that Sam should have asked. 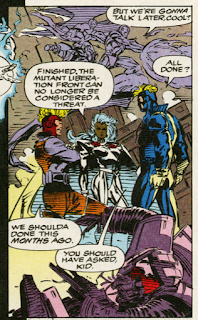 Colossus does the "solo angst on the mansion grounds" routine, though he just pulls up a random piece of junk instead of a tree stump this time. 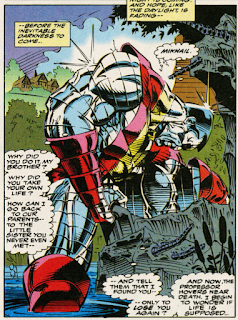 Strong Guy (or vague facsimile thereof) gets off a reasonably funny joke, telling Colossus he put Jack Daniels in their coffee then deadpanning a panel later, after tasting it, that he put in too much Jack Daniels.

In the wake of Xavier's injury, Beast ponders devoting himself more to bio-genetics, something we'll see happen over the next few years. 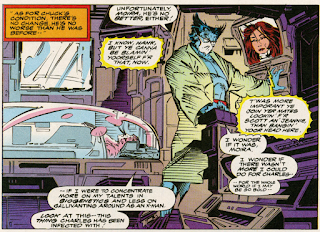 Sometime between checking out Cable's safehouse in the previous chapter and this one, Apocalypse re-entered his healing chamber (presumably due to the energy expended during his fight with the X-Men in Uncanny #295, though he seemed well enough in the safe house).

Artistic Achievements
At one point, Psylocke strikes a particularly pin-up-y pose mid-fight, which Nicieza then hangs a lampshade on via Boom-Boom's dialogue. 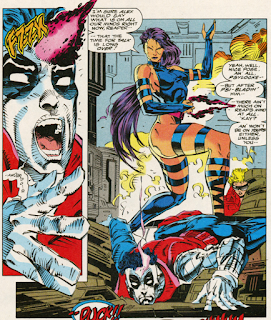 It's in the Mail
Mention is made in the letters page of Sabretooth's upcoming limited series, which will launch later in 1993.

Austin's Analysis
At roughly the halfway point of the story, this issue begins to pivot the focus of the narrative away from the initial focus of the Xavier assassination/hunt for X-Force/hunt for the true culprit and towards the more personal "Stryfe's vendetta" that will prove the running thread for the back half of the crossover. To that end, this features, effectively, the end of the Mutant Liberation Front as an ongoing threat, at least in their incarnation as a Stryfe-led counterpart to Cable's X-Force. Nicieza, of all the current writers with the most experience writing the villains, wisely gets to dismantle them, and does an effective job of making their defeat seem relatively routine without making X-Force look like chumps for not taking them down sooner, as multiple explanations are provided for the heroes' relatively easy victory here (including the lack of involvement from Stryfe and Zero and, in a nice moment between the X-Men/X-Factor/X-Force leaders, the fact that all three teams are to some extent working together for the first time to accomplish the goal). Unfortunately, the story overall will suffer a bit as Stryfe's personal issues become more the focus, let down by the narrative's ultimate non-ending, but for now, this chapter remains another satisfying example of the story closing off another dangling plotline from the Image Era as it continues to charge ahead.