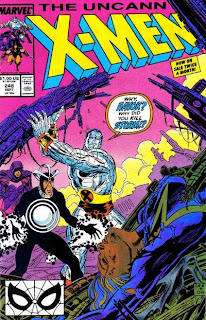 "The Cradle Will Fall"
Early September 1989

In a Nutshell
Longshot quits, Storm dies, and Jim Lee draws the X-Men for the first time.

Plot
As the newly reformed Reavers train against a robotic Wolverine, in Australia, Longshot grapples with his lack of memories and decides to leave the team to find himself. The next morning, Nanny and Orphan Maker launch their assault on the X-Men, starting by brainwashing Psylocke into thinking she's a child obedient to Nanny as Orphan Maker captures Havok and Dazzler. With the three X-Men locked into armored suits and their minds regressed to a child-like state by Nanny, they attack Storm and Colossus as Nanny tries to capture Jubilee. She overpowers Nanny, however, and with Storm holding her own against her armored teammates, Nanny decides to retreat. 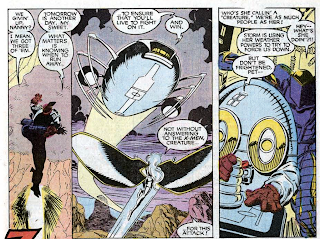 She and Orphan Maker flee to their ship, pursued by Storm as Colossus frees the rest of the X-Men from their armor. A groggy Havok emerges and, seeing Storm caught in a grappling arm by Nanny's ship, instinctively blasts the ship, sending it crashing to the ground, to the horror of the X-Men. As they scramble to the crash site, Psylocke announces she can't sense any thoughts from Nanny, Orphan Maker or Storm, and as they search the wreckage, they discover Storm's lifeless body.

Firsts and Other Notables
Jim Lee makes his X-Men debut this issue, providing pencil art (inked by regular inker Dan Green). His contribution here is just a one-off fill-in, but he'll return shortly to draw a three issue arc before eventually assuming regular penciling duties on the book as of issue #267. Thanks to being Jim Lee's first issue of X-Men, this quickly became a highly priced back issue shortly after it was released and well into the 90s; for many years, the only copy I had was the much cheaper second printing (with a gold background instead of purple), until I was able to snag a first printing at a con for cheap, well after the tumult over the issue had died down.

Longshot leaves the X-Men this issue, deciding that he needs to discover who he is and try to reclaim his lost memories in order to be part of the team, a decision that is, somewhat oddly, spelled out via a dream shared between Storm and Longshot via Gateway. Apparently, there were plans around this time for a Longshot ongoing series (written by Ann Nocenti and drawn by Art Adams) that would feature Longshot trying to regain his memories, and Claremont wrote the character out of this book to accommodate that. Of course, that series never came to fruition, and Longshot more or less falls into comic book limbo after this issue, making a few appearances here and there through the years before eventually becoming a regular, for a time, in Exiles and later still, Peter David's second X-Factor run.

Storm dies this issue. Except not really. We'll eventually learn that she was captured by Nanny off panel during this issue, after which her memory was wiped and her body reduced to a child-like state, with the body of Storm seen at the end of this issue a Life Model Decoy left by Nanny to make the X-Men believe Storm was dead. While that all sounds terribly convoluted and the result of numerous retcons, that appears to have been Claremont's plan all along: while Storm won't return to adulthood and rejoin the team until issue #273 or regain her memories until issue #267, Claremont will begin teasing her return with the debut of Kid Storm relatively soon, in issue #253. 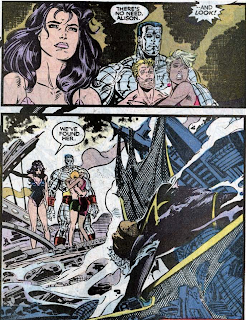 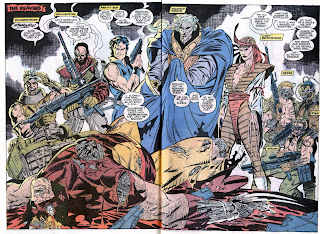 Similarly following on from last issue, Nanny and the Orphan Maker pop up to "save" the X-Men from the Reavers. Nanny's plan involves reducing the X-Men to a childhood state and brainwashing them into following her, as she's done with previous mutant children. As a hint to her intentions and the ultimate revelation regarding Storm's survival, she tells Orphan Maker she has a way around the fact the X-Men aren't children. 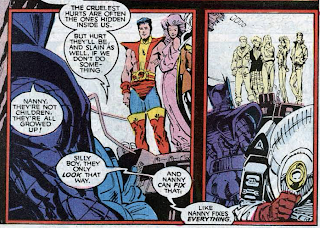 Like Storm, Nanny and the Orphan Maker are seemingly destroyed by Havok's blast at the end of this issue. They'll turn up again around the time that Storm's condition is revealed.

In Longshot's dream, Ricochet Rita is at one point depicted as having six arms (hers, Dazzler's, and Rogue's) before morphing into Spiral, an accidental reference to the eventual reveal that Spiral is Rita's future self. 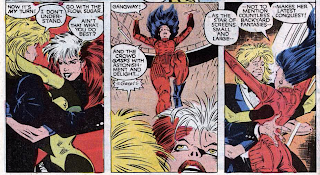 As it did the previous summer, the series begins bi-weekly publication as of this issue, running for the next three months.

A Work in Progress
As a hand-waving explanation for why the X-Men never seemed terribly concerned with Longshot's lack of memory prior to joining the team, Storm tells him they always treated him on his terms, basically saying he didn't care so they didn't care. 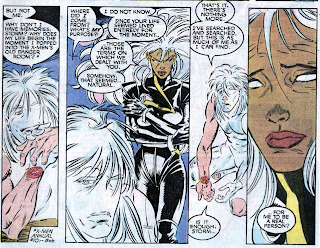 Nanny notes that the X-Men have become harder and less heroic since becoming "legends". 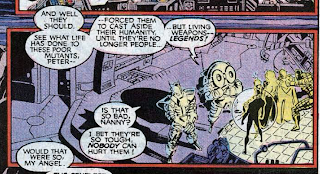 She also confirms she can't see the X-Men on her equipment, though when she later adds some components from the X-Men's computers to her own, she is able to view them (as the X-Men can view themselves via the town's computers). 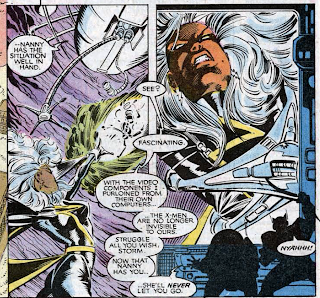 In a little bit of Silvestri-esque cheesecake, Nanny captures Psylocke while she swims in the underground cave beneath the X-Men's base, wearing the same negligee thing she was seen wearing under her armor in issue #239. 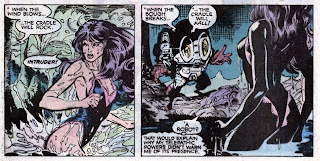 Dazzler is colored especially tan in this issue, as in recent past issues.

Colossus notes that the X-Men's supplies seem to be diminishing faster than they consume them, the first on panel recognition of Jubilee's presence in the town by the X-Men.

Jubilee herself pops up in this issue and escapes from Nanny. She's wearing the hodgepodge costume she cobbled together in X-Men Annual #13. 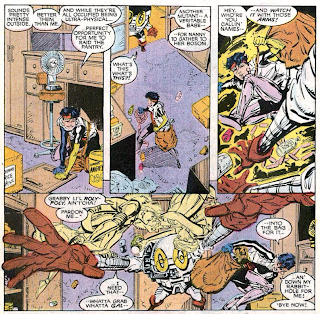 Her rocket pack damaged by Jubilee's firework's, Nanny gets stuck on her back, unable to get up or roll over under own power, a comedic circumstance that further undermines the threat of the villain.

I Love the 80sThe cover of this issue features an increasingly-rare dialogue bubble.

For Sale
There's a half page ad for an Indiana Jones phone game, promoting Last Crusade, something which sounds like it'd have to work pretty hard to be worth the expense of playing it. 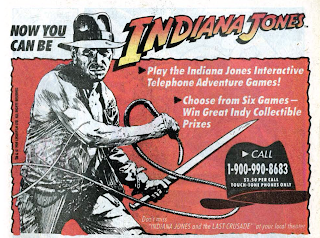 The back cover features an ad for Super Mario Bros. and Legend of Zelda cereal. I remember getting that as a kid. Shockingly, "fruit" and "berry" don't taste all that different when it comes to flavored cereal. 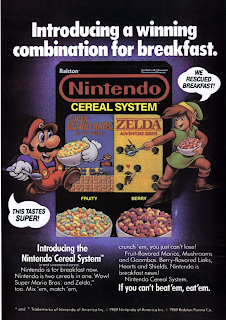 Teebore's Take
This issue is notable for being Jim Lee's introduction to the X-Men, and while for now it's just a one-off fill-in and his style is still developing (it's not quite yet what most people associate with Jim Lee's art), there's no denying the impact the man will have on the X-Men. In terms of his artistic contributions (for an entire generation of fans, the costumes he'll design for the team are the default looks for many of the characters, including, thanks to the animated series' adoption of those costumes, many fans who have never picked up a comic book), his desire to return the book to a more traditional format after years of experimentation by Claremont (and the incredible popularity of his art, which gives editorial the impetus to side with Lee's plot desires over Claremont's, eventually leading, in part, to the exodus of the man who made the X-Men what they are), and the perfect storm that was the popularity of the X-Men combined with the popularity of Lee's art combined with the burgeoning speculator market that led to X-Men (vol. 2) #1 becoming the best-selling comic book of all time, the argument could be made that Jim Lee is most significant X-Men artist since John Byrne.

But all of that is still in the future. For now, we have the continuing dissolution of the team to deal with, and this issue carts off two more members. While it's not Claremont's fault the ongoing series he wrote him out to accommodate never came to fruition, Longshot's disappearance from the book in this issue is still disappointing, coming as it does mostly off panel and with no one (especially Dazzler) given much of a chance to react to it beyond a quick line of dialogue.

Storm's death is obviously meant to be the bigger deal, and while it's clear that readers at the time were meant to assume she is dead, perhaps the biggest red herring that things are not as they seem is the fact that her death comes about at the hands of Nanny and the Orphan Maker, weak sauce villains appearing in Uncanny for the first time. Even ignoring what's coming, it's hard to buy that anyone would believe they'd be the ones to permanently kill off one of the series longest-tenured and significant characters. But while Storm's "death" may not be all that it appears to be, her absence from the book will be long lasting. That, along with Jim Lee's debut, makes this issue highly significant to the book's future in both the long and short terms.

Next Issue
Tomorrow, the New Mutants are in Asgard in New Mutants #79, followed on Friday by X-Factor #44. Next week, the X-Men head to the Savage Land in Uncanny X-Men #249.
Newer Post Older Post Home
Posted by Austin Gorton at 12:00 PM