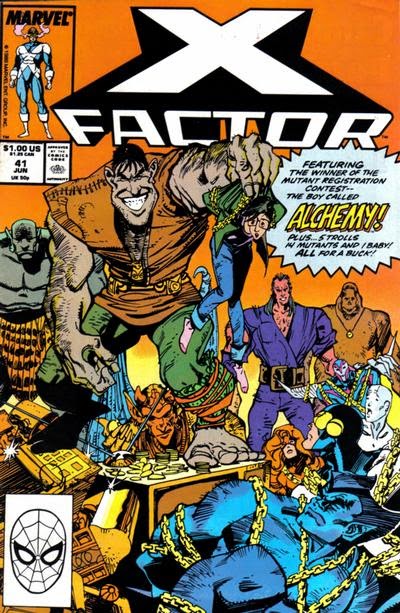 In a Nutshell
The first appearance of the winner of the Mutant Registration contest.

Plot
In London, a troll emerges from his lair, attracted to the scent of gold. It leads him to the house of Thomas Jones, and the troll watches as Thomas, studying for a chemistry test, unknowingly transforms his pen into gold. Called to dinner, Thomas leaves and the troll enters his room, determined to snatch the boy and use him to expand the Troll Associates treasure trove, thus restoring England to those who live by the old magical ways. Meanwhile, aboard Ship, X-Factor oversees the training of the newly-integrated X-Terminators and New Mutants. Back in London, Thomas returns to his room and his grabbed by the troll, prompting his mother to call X-Factor for help. 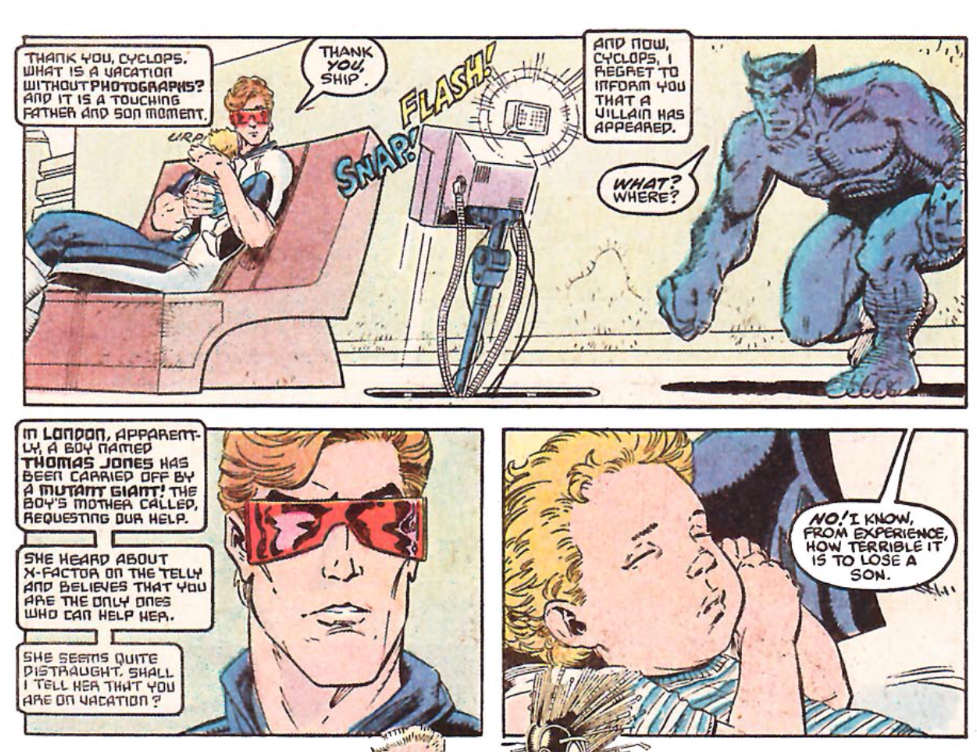 The New Mutants promise to be good and return Illyana to her parents while X-Factor is away, and though they offer to watch baby Christopher as well, Jean suggest bringing him along, saying he should stay with his father. Arriving in London, X-Factor meets with Thomas' mother, then follow a trail of golden objects left by the boy to the troll's lair. Inside, they find a vast store of gold and a group of five trolls with various abilities, who manage to overpower X-Factor. The trolls explain that they plan to use Thomas to flood the world with gold, thus destroying the economy via inflation. Marvel Girl insists they need to free Thomas, then realizes Christopher has gone missing as well.

Firsts and Other Notables
This issue marks the first appearance of Alchemy aka Thomas Jones, a young British mutant with the ability to transmute metal. Alchemy is the winner of the Mutant Registration contest from "Fall of the Mutants", in which contestants filled out the Mutant Registration card inserted in various comics to "register" a mutant of their own creation, one of which was then chosen to appear in this issue (the contest originally said an issue of New Mutants, but here we are). Alchemy'll pop up a couple more times after this story, but that's about it. 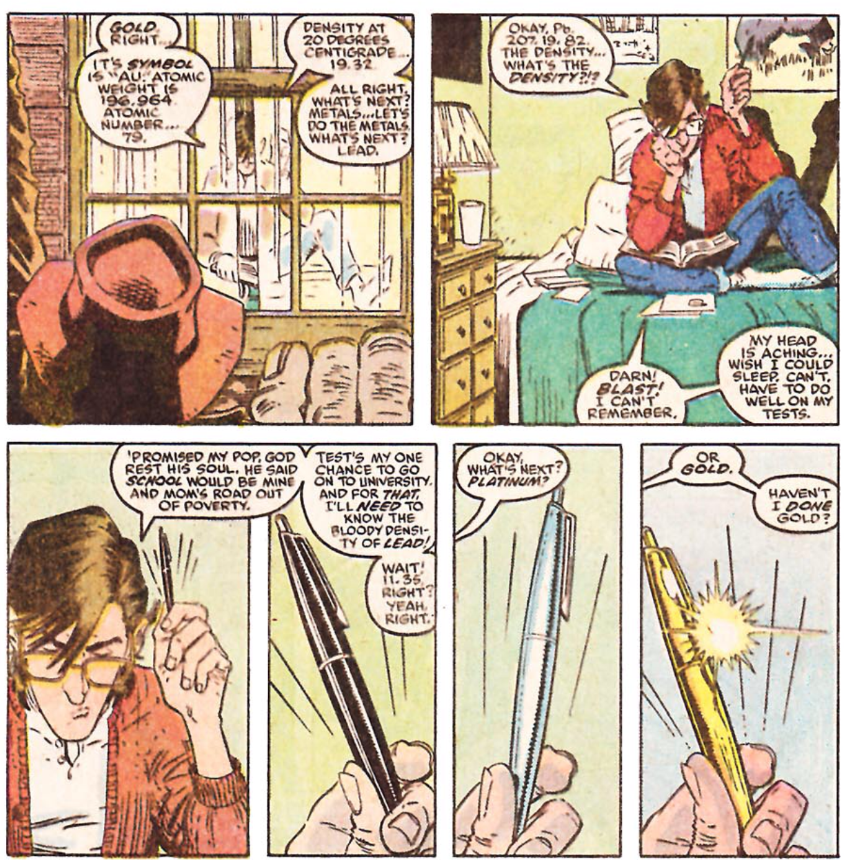 Art Adams serves as the guest artist for this issue and the next. While we've seen plenty of his work on various X-Men annuals, this marks a rare bit interior art on a regular series for the artist (though it's not the last time we'll see his pencils on an issue of a regular series).

The New Mutants, having been "adopted" by X-Factor in issue #76 of their series, guest-star in this issue; unfortunately, despite this new status quo, this is pretty much the only issue of X-Factor in which the New Mutants appear while under their care. 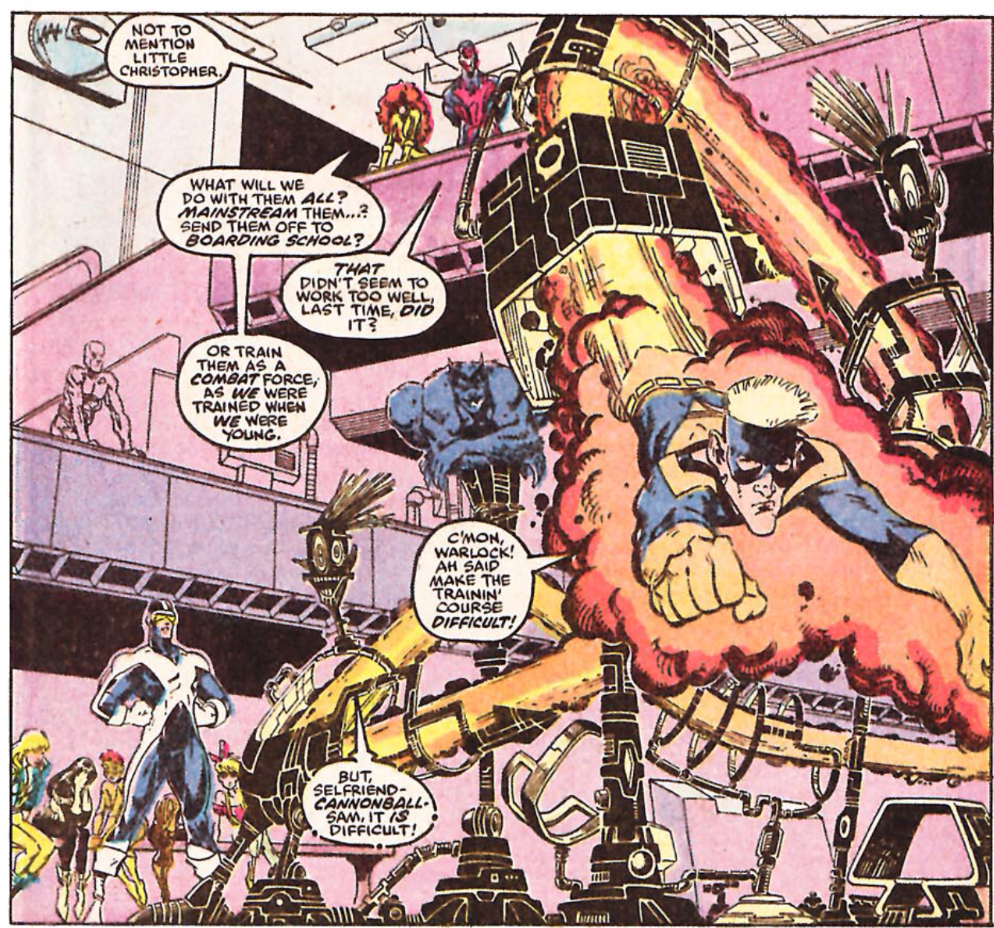 X-Factor battles a bunch of trolls in this issue and the next, a group which calls themselves Troll Associates. They plan to destabilize the world economy and retake England for magical beings. I'm pretty sure this story is their only appearance. 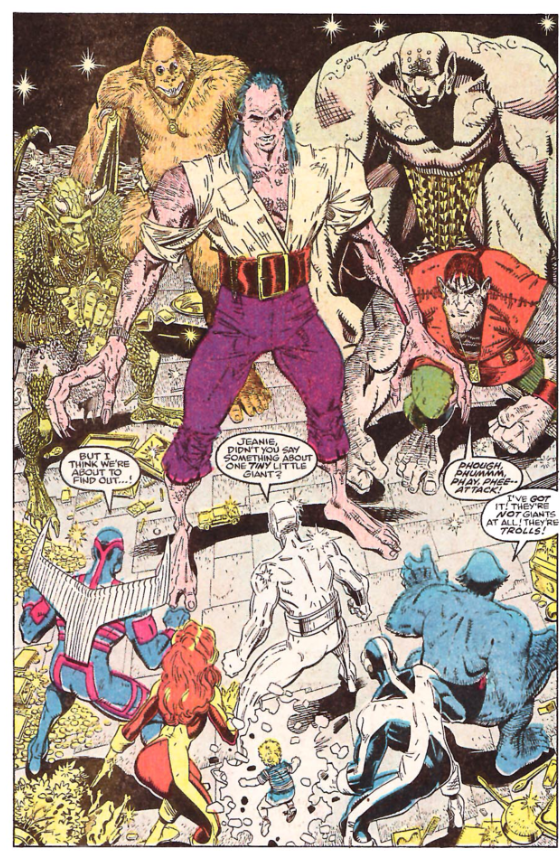 The Chronology Corner
The New Mutants appear here between issues #76 of their series and New Mutants Annual #5.

A Work in Progress
Dani's headaches continue to be a problem, and she's running a fever, while Brightwind is now feeling poorly as well. The kids agrees to take her to a doctor while X-Factor is gone, which they'll do in New Mutants #77. 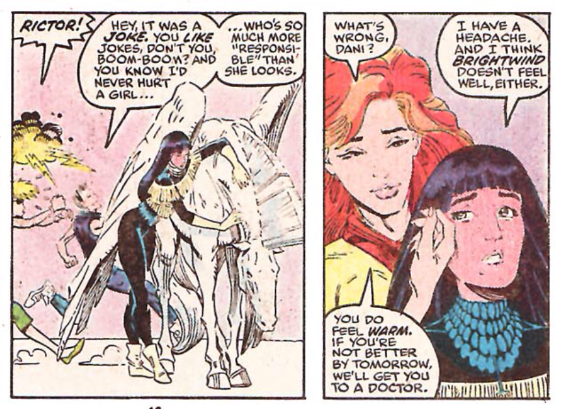 Jean and Warren discuss all the changes wrought on the team of late, and Jean has the gall to suggest to the person with blue skin and razor sharp wings with an evil mind of their mind that she's changed most of all due to the darkness she's inherited from Maddie and Phoenix. 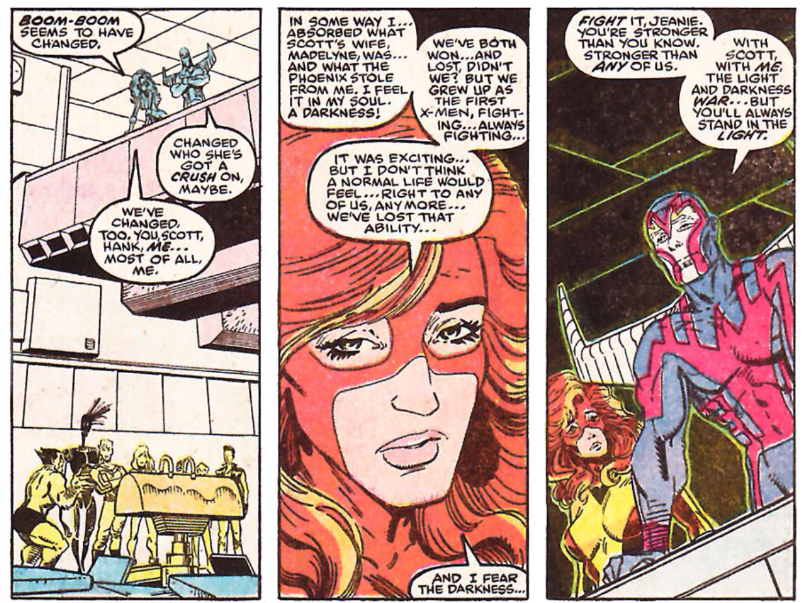 The New Mutants agree to do a bunch of stuff while X-Factor is gone, much of which we'll see them do in future New Mutants issues. 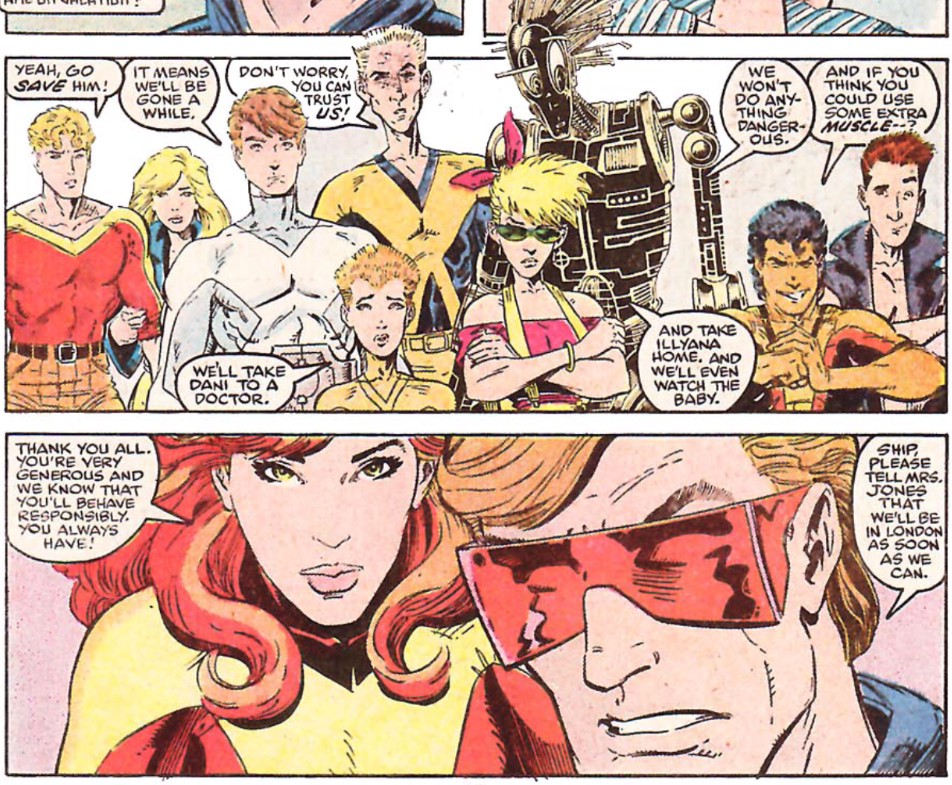 X-Factor decides to bring Christopher along with them, for a variety of relatively dubious reasons, though their arguments for bringing him aren't entirely unfounded. Basically, it's a reminder of how much it sucks to be the child of a superhero in the Marvel Universe. 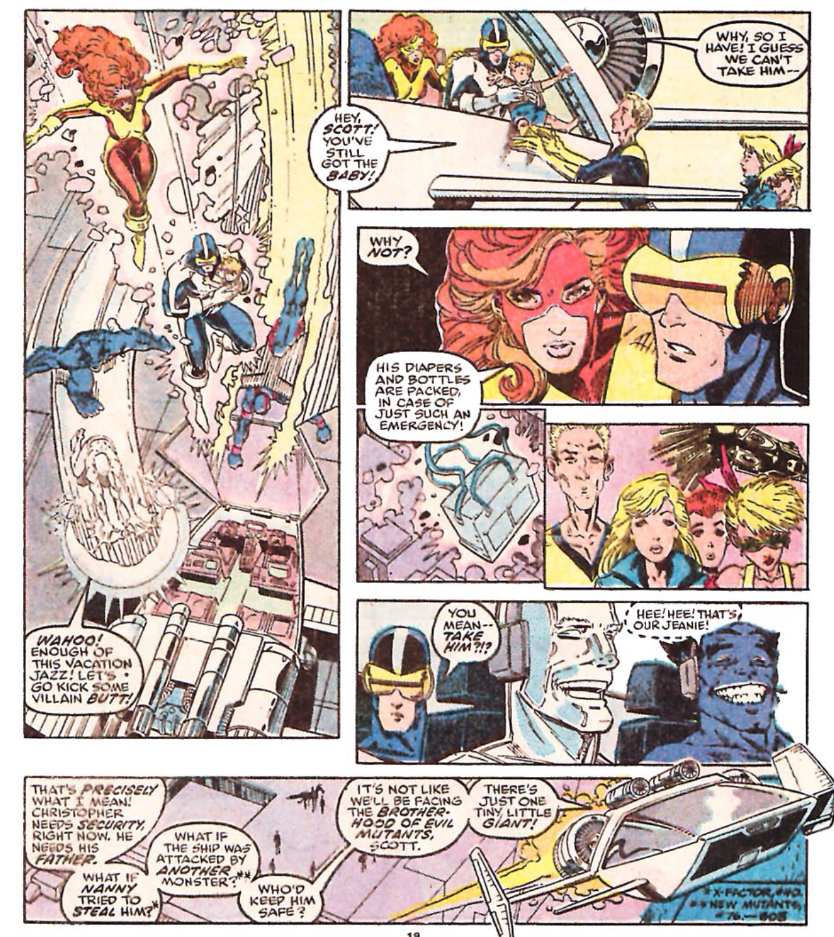 This leads to a joke about X-Factor trying to win a contest for having the youngest team member, which sparks another joke about how competitive Americans are. 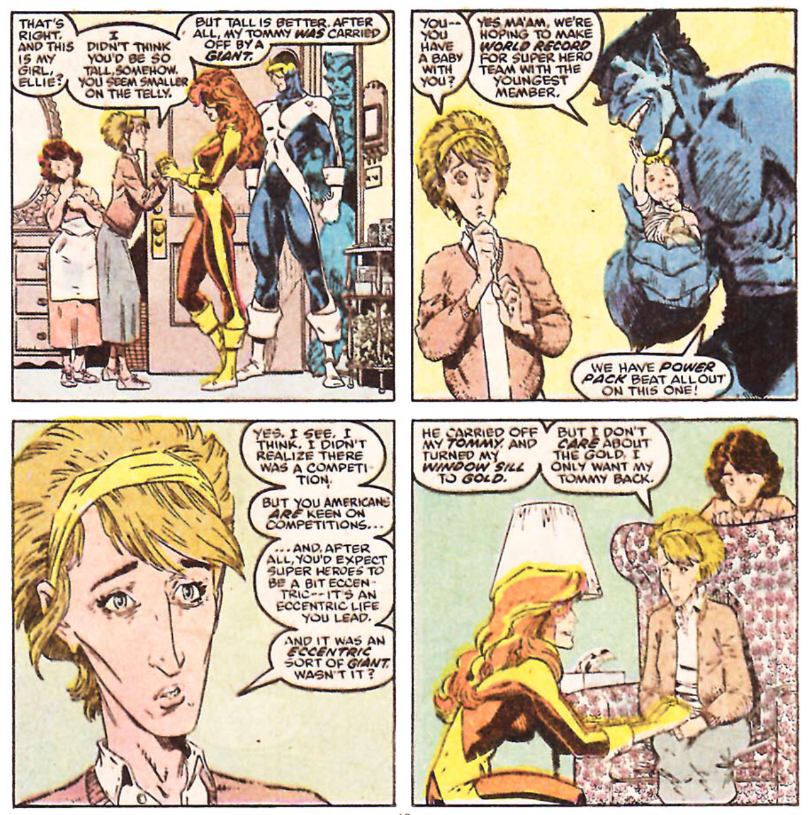 The Reference Section
Ahem, I think you mean Sorcerers Stone. I am American, and thus wouldn't possibly want to read about something as stuffy-sounding as a Philosopher's Stone. 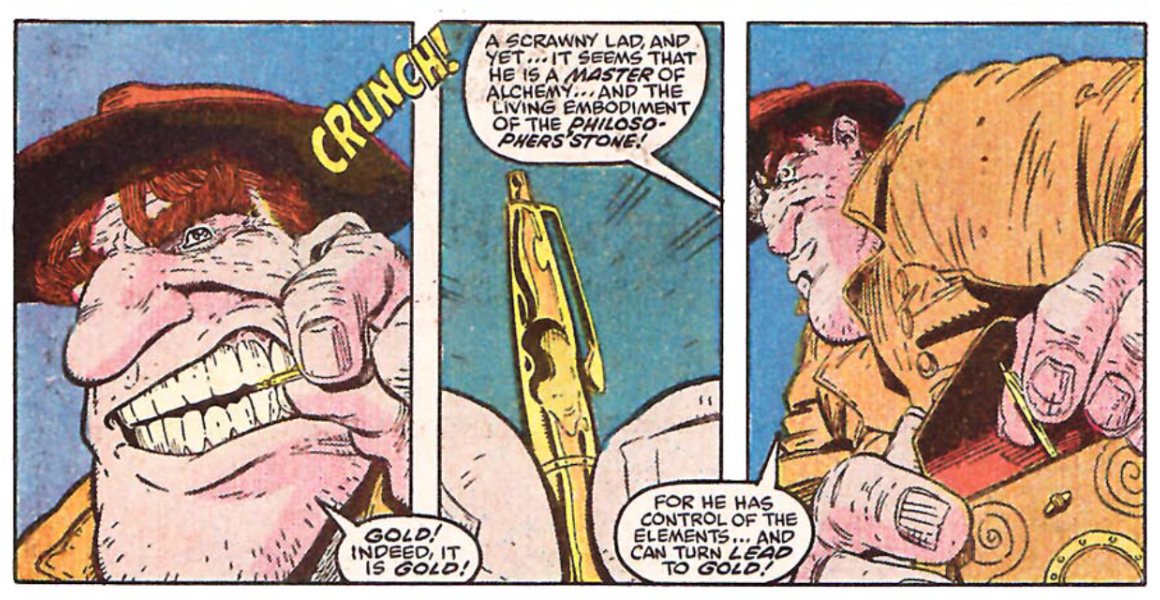 Young Love
Boom-Boom continues to crush on Sam, and is irritated that he doesn't seem to notice her. 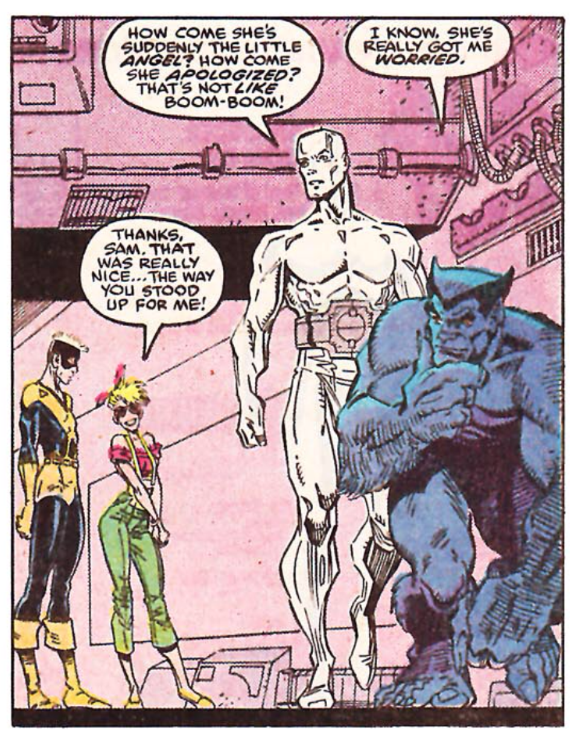 Teebore's Take
This issue kicks off an odd little two part story, in that it's wedged between long running story arcs ("Inferno" and the upcoming "Judgement War") and sets up a new status quo (the New Mutants as wards of X-Factor) that pretty much only appears in this issue (New Mutants will get a little more mileage out of the idea, but not much). Yet, it's impossible to entirely disregard it as a pointless fill-in story, thanks to Art Adams providing all-too-rare interior pencils to a regular series.

Unfortunately, the best material is in the first half of the issue, in which the new status quo is being shown off as the New Mutants integrate with X-Factor and the X-Terminators. It's reminiscent of the Claremont/Smith/Romita Jr. eras of Uncanny X-Men, when the New Mutants were essentially supporting characters in that book, and in those few pages, a ton of upcoming subplots are setup and we even get some character development. Even knowing retroactively that it's pretty much a false start, it's still fun to see the characters just hanging out together. After that, things settle into a fairly ho-hum action story as X-Factor confronts the trolls, but Simonson does have a little fun at the expense of superhero tropes and, of course, Art Adams livens it all up appreciably. You just can't go wrong with Art Adams.