Much to the continued embarrassment and consternation of Mrs. Teebore, I am an unabashed fan of Beverly Hills, 90210, having grown up watching its ten season run and continuing to watch occasional episodes, thanks in large part to Soapnet reruns. In honor of 90210 Day (9/02/10) here are five of the most memorable moments from 90210. 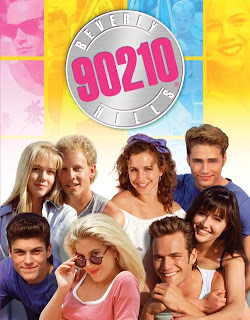 5. The debut of Valerie
Already the subject of many of young man's fantasy thanks to her turn as squeaky clean Kelly Kapowski on Saved by the Bell, Tiffani Amber Thiessen rolled into Beverly Hills in the wake of Shannon Doherty's departure from the show. With Brenda studying theater in London, Thiessen, as Valerie Malone, the Walsh family's old friend from Minnesota, moves into Brenda's old room, goes on a sightseeing tour of the city, and innocently flirts with hounddog Steve Sanders. By the end of Val's debut episode, it looks like Kelly Kapowski has simply moved to a new zip code before Val retires to her room to DUN DUN DUN roll a joint and gets high while bemoaning having to play the "good girl". Before long, she'll be picking fights with Kelly, flirting with Brandon, sleeping with Dylan while dating Steve and generally whoring it up. Kelly Kapowski she wasn't, and young men everywhere couldn't be happier.

4. Brenda and Dylan break up
They were 90210's Zack and Kelly, Sam and Diane, Sonny and Cher. The early seasons of the show were built around the romance between badboy Dylan McKay and bitchy-girl Brenda Walsh, with the highs and lows of their relationship considered turning points on the show. Never was this more true than when they broke up for the first time, as Brenda calls it quits after a pregnancy scare in an episode that kicked off 90210's first summer season. The aftermath was felt all summer long, as Dylan quickly injured himself in a surfing accident and, with nowhere else to go, ending up recuperating on the Walsh's couch. Oh, sexual tension...

(Also, I will always think of R.E.M's "Losing My Religion" as the Dylan/Brenda breakup song).

3. Dylan's dad blows up
Things were going well for Dylan: his estranged father, Jack, imprisoned for shading financial dealings and mob connections, was out of jail and the two were bonding for the first time in years. Unfortunately, it turned out Jack was released from prison because he agreed to work with the FBI against his old mob buddies. Before you could finish a chorus of "Take Me Out To the Ballgame", Jack was killed by a mob-planted car bomb, and Dylan was left with nothing but more fist-clenching angst.

(The revelation years later that Jack faked his death in order to enter Witness Protection and keep Dylan safe was the moment when 90210 not only crossed the line into full on soap opera (a line it had flirted with for years) but obliterated that line so it could never go back).

2. Scott accidentally kills himself
In 90210's first season, long before he fell for Donna or hip-hopped his way into our hearts, David Silver was just a nerdy freshman desperate to get in with the cool crowd at West Beverly High (ie the main characters). His partner in early 90s geekdom was the equally socially inept Scott Scanlon. By their senior year, after a summer apart (during which David's dad married Kelly Taylor's mom, finalizing David's slow acceptance into the cool crowd while Scott spent the summer on his uncle's ranch, developing an affection for firearms and other cowboy accouterments) their friendship was hanging by a thread. Scott invited David and the cool kids to his birthday party, which turned out to be a traditional (read: uncool) shindig, complete with parents and party games. Looking to liven things up, Scott discovers his father's gun, and spinning it Robocop style, he accidentally shoots himself in front of a horrified David. For preteen Teebore, there was no more potent a gun control PSA.

1. "Donna Martin graduates!"
Just as everyone mentions the "I'm so excited....I'm so scared" Jessie Spano freakout moment when talking about Saved by the Bell, no 90210 moment is more embedded in the pop culture zeitgeist than "Donna Martin graduates!" After being caught intoxicated at the Senior Prom, Donna Martin is facing suspension, which means she won't graduate high school with her friends. So Brandon leads a 1960s-inspired walkout of the student body and marches on the school board as Donna's appeal is being heard, demanding that Donna Martin graduates or no one will. Arguing that the school board's new no tolerance policy regarding drinking caught the wrong person of which to make an example, Donna is allowed to graduate and a pop culture meme is born.

Honorable Mentions
Brandon drops E at a rave (another pivotal PSA for young Teebore), David cheats on Donna in a limo, Kelly gets burned in a house fire and joins a cult, Dylan's bride is accidentally killed by her father, who was trying to kill Dylan, and that time Brandon got in too deep betting on basketball and Nat had to bail him out.
Newer Post Older Post Home
Posted by Austin Gorton at 8:00 AM