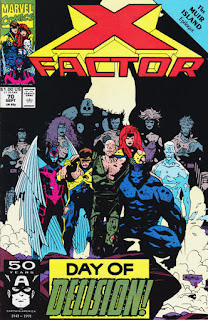 In a Nutshell
The X-Men & X-Factor deal with the aftermath of the Shadow King's assault.

Plot
As Xavier probes Legion's mind for some remnant of his son, Cyclops, Marvel Girl & Storm worry about Xavier's physical condition and the strain he's putting himself under. Outside, Beast, Colossus and Forge attempt to clean up some of the damage wrought on the island by the Shadow King, while Rogue reconciles with Mystique, learning how she survived her apparent assassination by Val Cooper and came to take Val's place alongside the Shadow King. Elsewhere, Wolverine gives Jubilee some upsetting news, and Polaris is practicing her regained magnetic abilities along with Guido when the pair is approached by Val about joining a team intended to replace Freedom Force. Back inside the research facility, Xavier continues to search Legion's mind to no avail, and Marvel Girl brings herself along with the rest of X-Factor into his mind in order to convince Xavier to let Legion go. Regaining consciousness, word spreads on the island that Xavier will be alright, while he quietly says goodbye to his son, then ponders what he's to do with fourteen X-Men.

Firsts and Other Notables
Peter David begins his initial run as the series writer with this issue; he will stay on the book through issue #90, but return to the series for an even longer run in 00s, and is at this point probably considered the definitive X-Factor writer, even though he wasn't involved with the first iteration of the series.

After noting her diminished size in X-Men #280, this issue reveals that in the wake of serving as the Shadow King's nexus, Polaris' magnetic powers have returned and her whole "trigger and absorb negative energy to grow physically stronger and larger" powers are gone. Which, of course, makes no sense given that the Shadow King had nothing to do with the change in her powers in the first place, but the deck needs to be cleared of all these dangling plotlines, so here we are (Brian Cronin at Comics Should Be Good has a nice rundown of the history of Polaris' new powers here). 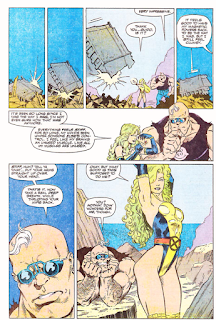 Val Cooper approaches both Polaris and Guido about joining a replacement for Freedom Force (though it goes unfootnoted, they were effectively dismantled by the events of the "Killing Stroke" backup story running through the '91 X-annuals), which is setup for the new direction of the book beginning next issue (both Polaris and Guido are dismissive of the idea, but they will in fact be new members, along with Madrox, whom Val also mentions talking to about the team). 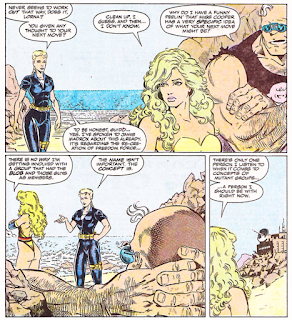 This issue reveals what happened between Val Cooper and Mystique at the end of X-Men #265, which led to Mystique taking Cooper's place (as revealed last issue): sent by the Shadow King to kill Mystique, Val fought his control enough to turn the gun on herself, grazing her skull and knocking her out, Mystique proceeded to call Nick Fury, who sent a SHIELD team to stage the scene, along with a hypnotist who made Mystique believe she was Val Cooper (in order to fool the Shadow King). The real Val was carried away in an ambulance by SHIELD, who told everyone it was Mystique, and she later recovered. 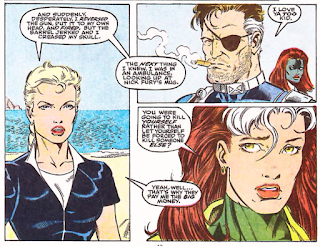 Also, Mystique says that only Fury could give her the trigger word which would reveal her true personality (Rogue); yet we never saw that happen last issue (and it would have needed to happen right before "Val" turned on the Shadow King, or else he'd have realized the truth). 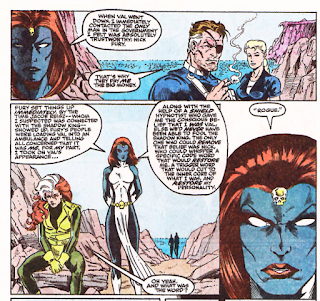 Given that Claremont set all that in motion, I'd love to know how much of that fits what he had in mind, and how much was David coming up with an explanation all on his own to close out that particular dangling plot thread.

Wolverine has a conversation with Jubilee off panel this issue, and we never learn what they discussed; instead, we only see Jubilee's reaction to it, which strongly implies that Wolverine told her she was being taken off the X-Men, and, in fact, Jubilee is nowhere to be found post-relaunch for several months, not appearing in either title until X-Men (vol. 2) #4. However, her appearance there goes unremarked upon (there's no "Welcome back, Jubilee!" moment), and she appears in issues of Wolverine set after this story without comment as well, so its not entirely clear what the Wolverine/Jubilee scenes in this issue are meant to imply after all (ultimately, it's probably a case of wires being crossed during the creative changeovers; perhaps Claremont intended to write Jubilee out of the series, hence her absence in X-Men #1-3, and David set that up here, but once Claremont left, Lee brought her back for issue #4 and just pretended the events of this issue never happened). 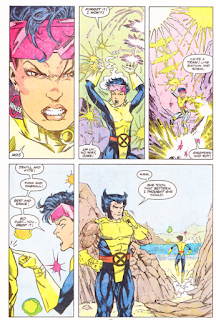 This issue confirms that Xavier has been crippled by the Shadow King, and he is told he'll never walk again. However, Xavier refuses to accept that, pointing out all the other times people were told they would "never" do something only to prove that wrong, and though David had no way of knowing this then, Xavier would be proven right, as he will, eventually, regain the ability to walk once again. 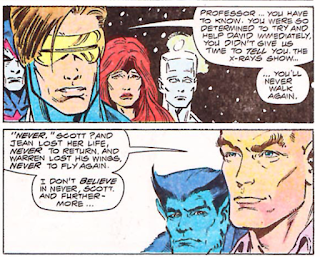 The issue ends with Professor X pondering what to do with fourteen X-Men, a deliberate homage to the similar sentiment which closed out Giant-Size X-Men #1, the last issue to shepherd in a lineup change as significant as the one looming at this time, though Xavier's count is a bit short (in that it doesn't include characters who don't appear in this issue, like Psylocke, Banshee, Madrox and Siryn, not to mention Amanda Sefton, Sharon Friedlander and Tom Corsi, who disappeared entirely at various stages of the story). 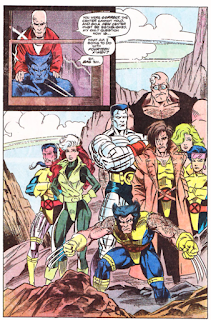 Creator Central
Mike Mignola does the cover for this issue, an understated one that nevertheless puts the X-Factor team front and center, fitting for the final issue of their iteration of the series.

A Work in Progress
Muir Island is shown to be crescent shaped now, Legion's explosion triggered in issue #69 having blown a hole in the center of the island that's filled in with water, though I don't believe the island is ever depicted this way in later issues (also, Uncanny X-Men #280 suggested that the upper levels of Moira's facility were destroyed, leaving he subbasement intact, but here it looks like the facility as a whole is still in place). 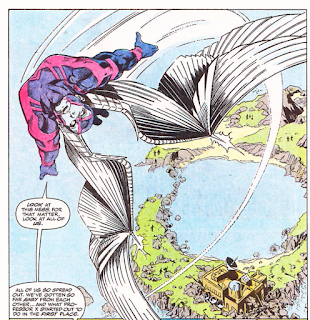 Rogue is, of course, wearing a new costume this issue, her fifth in five chapters of this story, though at least here there's been a passage of time to account for the change (especially since she was last seen in shredded bikini). She and Mystique reconcile after periods in which both believed the other to be dead, though their mother/daughter relationship will, unfortunately, go largely ignored for several years following this issue, even during a period when Mystique is living at the mansion. 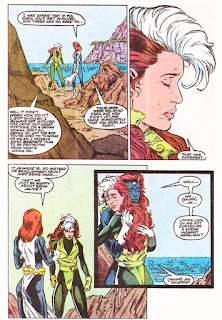 Xavier notes the changes wrought on X-Factor since he left Earth in X-Men #200, a nice, if brief, summation of what they've been through in the last 70 issues (though Xavier seems to suggest he didn't even know Madelyne was pregnant; he did, he just left Earth before Nathan was born). 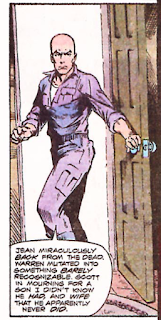 He also notes, in respect to Jean's return, how death seems to be a revolving door when it comes to the X-Men, a truth that will become more and more true in the years ahead. 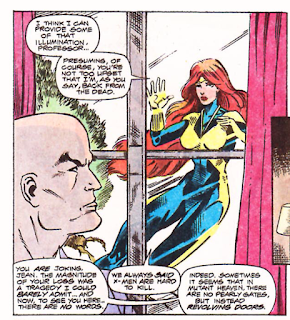 The Reference Section
Beast quotes the beginning William Butler Yeats' poem, "The Second Coming", cutting off before he gets to the arguable most famous lines about the beast slouching towards Bethlehem. He later paraphrases the poem to Professor X, arguing that without him, the center of the X-Men cannot hold. 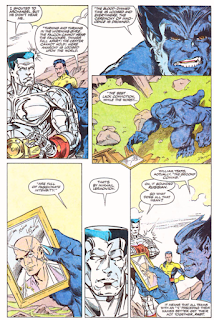 The Best There is at What He Does
Wolverine pulls the old tough guy trick of extinguishing his cigarette by swallowing it. Also, it's notable that Wolverine is smoking a cigarette; usually, he smokes cigars. 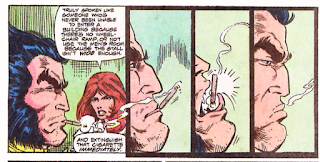 Teebore's Take
Peter David specializes in characterization (well, that and puns), so it's something of a blessing that he comes aboard X-Factor an issue before the new team and direction debuts, allowing him to pen the epilogue to "The Muir Island Saga", which is almost entirely focused on characterization and plot-point clarification, allowing the X-Men, X-Factor, and Muir Islanders (most of whom will soon be the new X-Factor) a moment to breath before everything gets shaken up, and giving the readers some of the character-based moments that have been missing from a story which has, mostly, been about one group of heroes fighting another group of heroes for four issues.

Of course, there's more character moments and dangling plot thread that need addressing than can possibly fit into one normal-sized issue, plus David still has some deck-clearing and setup to do for next issue, making it clear that Legion is gone for (seemingly) good, introducing the idea of a replacement Freedom Force, and teasing the idea of the second X-Men title by recalling the end of Giant Size X-Men #1, so there's only so much he can do. But the moments we do get are appreciated: Rogue and Mystique reconciling, both happy to learn the other is alive after all, Colossus, Beast and Forge bemoaning the destruction wrought on Muir Island and question of what's next, Xavier despondent over the loss of his son, and needing the original X-Men to help him let go (in what amounts to the closest thing the original iteration of this book gets for a sendoff). We also get glimpses of the humor David will bring to the series during his run, in the Guido/Polaris scene, and the sequence in which news of Xavier's health is passed across the island.

One issue, however well-intentioned and well-executed, can't salvage an entire story all by itself, but given how much the "Muir Island Saga" as a whole reads like an afterthought, something cobbled together by a fill-in team while the "real" creators are off prepping something bigger and more important, a story which gains almost all its impact from being a thing that happens before another, more notable, thing, it's appreciated that somebody thought to give the story an epilogue, a chance for the characters (and readers) to catch their breath and look back, to focus on the characterization that's been mostly missing from the story as a whole, even if just for one, brief, issue.

Next Issue
Next week: Wolverine: Bloody Choices, Marvel Comics Presents #85-91 (Beast story), and a look back at the first 70 issues of X-Factor.