The moments of Season Two that don't quite hold up.  And, yes, the same subject tops the Highs and Lows list. 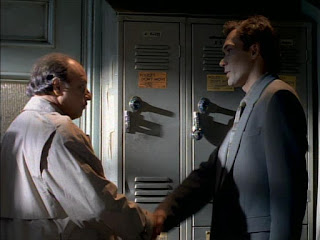 Season Two Lowlights
Detective John Kelly’s exit.  While the departure of David Caruso was orchestrated as well as could be expected, there is one element that’s a severe disappointment.  Caruso and Franz are still sharing a minimal amount of screentime together, meaning that Sipowicz barely interacts with his partner during their final days together.  The last episode with John Kelly doesn’t even feature Kelly and Sipowicz working a case together; in fact, Sipowicz is off in an allegedly humorous subplot involving a dead cop that croaked while engaged with Sipowicz’s old prostitute.  It’s literally Weekend at Bernie’s : Cop Style intercut with the story of Kelly investigating a dead baby, all while the political strings are being pulled to force him off the force.  Sipowicz and Kelly share one final scene together, one that is just as well written as I would expect it to be, yet it only lasts a minute or so.  Kelly says he’s going to leave, Sipowicz tells him not to, Kelly says his mind is made up, and then Kelly is gone.  I realize the producers stopped trying to sell the Kelly/Sipowicz partnership midseason last year, but it remains a disappointing conclusion to their pairing.

Kelly’s exit is followed in the very next episode by the introduction of Bobby Simone.  Looking back on these episodes, it’s not hard to notice that the early Bobby Simone episodes are pretty weak.  I can understand why the producers were nervous about replacing the charismatic Caruso with a new actor, but they’re clearly far too desperate for the audience to like the new guy.  Within a few minutes of his introduction, he’s already rescuing Lesniak from her abusive ex-boyfriend, who’s now brandishing a gun and is ready to kill everyone in the squadroom.  The entire squad joins in the fight, but it’s Bobby who subdues him.  Later in the episode, we discover that Bobby is a widower, and he’s spent the past few years taking care of his cancer-stricken wife.  A few episodes after that, Bobby saves Sipowicz’s life from a gunman, and Sipowicz goes out of his way to point out that this “situation” never happened with his previous partner.  Bobby also manages to collar a serial killer who’s slipped past more seasoned investigators for over ten years now.  And by the time we’re at the season finale, our previous hero John Kelly can’t make it to the wedding (we’re told through a one-sided phone conversation), so who’s Sipowicz’s best man?  The new hero, Bobby Simone, of course.  Truthfully, I do like Jimmy Smits as Bobby Simone, but as a viewer, I resent the hard-sell.

Bobby Simone’s character, presented to the audience initially as an introverted widower still making his way through the biggest loss of his life, wouldn’t seem to be an obvious candidate for Blue’s gratuitous sex scenes.  That doesn’t stop the producers from cramming him into the kind of shallow, quickie hook-ups from the Caruso days, however.  This is a clear case of the producers telling, not showing us, just how broken up Bobby is over his wife…the character arc they’re trying to sell is wounded by the desire to exploit the nudity gimmick.  And I’ve got to figure this comes more from the Bochco side than the Milch side; Milch was free to have all of the nudity he wanted on HBO’s Deadwood, but didn’t seem to feature any more than Blue did.

Finally, perhaps the most infamous storyline of the show’s history begins this season.  It doesn’t turn truly idiotic until next year, but the seeds are planted this season.  I’m referred to the Martinez/Lesniak “romance,” which consists of Martinez just suddenly declaring that he’s interested in Lesniak (why, isn’t clear), Lesniak making it clear more than once that she’s not interested, Martinez refusing to take the hint, and Lesniak relenting and agreeing to attend Sipowicz’s wedding with Martinez.  At this point, the subplot just comes across as poorly planned filler.  Next year, it takes one dumb turn after another.

Miscellaneous Notes
Some new writers this season of note…
Charles H. Eglee & Channing Gibson go on to create the Jessica Alba vehicle Dark Angel with James Cameron (and Eglee will later run The Shield, Dexter, and The Walking Dead during its first year).
A young Christopher McQuarrie pens an episode this year; he’ll go on write The Usual Suspects, and then work on the X-Men films and other Bryan Singer projects, and direct the latest Mission Impossible movie.
And David Mills’ first TV script is this season; he goes on to write for ER, Picket Fences, The Wire, and Treme.  (More on Mills next season…)

Sipowicz Says
Sipowicz to an abusive husband that was released from prison and later killed his wife: “I’m gonna get a migraine tonight ‘cause I didn’t beat you.”  Probably my favorite line from the entire season.

What Was the Point of THAT?
There’s nothing wrong with having James Martinez join the force’s amateur boxing league; it actually opens up quite a few story possibilities for the character.  He’s a small guy that’s probably going to be outclassed by most of his opponents, his natural disposition is just too nice for the sport, and the boxing matches offer an opportunity for him to interact with other cops in a totally different context than we’ve seen so far.  Having Fancy, another character without a lot to do, act as his boxing coach also opens the door for some potentially intriguing stories.  So what comes of it?  Some nice sparring scenes that last all of one episode, and the show just forgetting by the next season that Martinez is a boxer.  So…what was the point?

Next time…
I go further back in time to a place called “the eh-tees.”  I’ll look at David Milch’s first TV job, Hill Street Blues, and the two Proto-Sipowicz characters introduced there.  In case anyone doesn’t know, Franz actually played two different characters on the show.