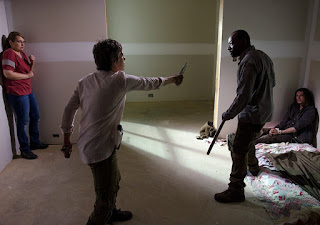 So, the shit hit the fan. It's not really a surprise. This is the midseason finale and we saw what happened at the end of last episode. The church tower fell onto the fence allowing Alexandria to be overrun by zombies.

And when the shit is hitting the fan, the undead are roaming your once safe town and all hope seems lost, you know what the best thing to do is? It's to start fighting with each other over your own personal beefs. Because pissing and moaning at each other is a real productive way to keep from dying.

The in-fighting that pissed me off the most was between Carol and Morgan. (Naturally, because it seems impossible for Carol not to piss me off.) Carol knows Morgan is hiding something and damned if she's going to have anybody keep a secret from her! Who cares if the town is going to shit and she should be trying to figure out a game plan to deal with this crisis, Morgan's secret is the most important thing!

Yup, Carol can't let anything go so of course she knocks out Morgan and finds the Wolf in his basement. Denise is giving medical attention to the Wolf so, gasp, there's two evil, hippy pacifists in Carol's midst! This won't do at all so, naturally, Carol tries to kill the crazy Wolf.

But, no, cooler heads can never prevail on The Walking Dead so Carol and Morgan have a physical fight. This fight takes place right in front of the crazy sociopath who, of course, waits for the opportune time to take them both down and free himself. Eugene, Tara and Rosita bust in on the scene just in time to keep the Wolf from offing everybody but not in time to stop the Wolf from taking Denise hostage and using her to escape.

I'm not saying Morgan is not to blame. I think, under the specific circumstances of The Walking Dead, pacifism has its limits and that Wolf needed to die. But, dammit Carol, choose your battles carefully. Or, more specifically, choose the timing of your battles carefully. The guy was tied up and not an immediate threat. The immediate threat was outside the building you're in and you, Morgan and Denise needed to find a way to deal with that.

I know the Wolf escaping looks bad on Morgan but if Carol hadn't foolishly gotten into hand-to-hand combat with Morgan right in from the Wolf than the escape wouldn't have happened. All Carol needed to do was take the talking to or battling with Morgan into a different room. If Morgan refused to leave the basement then, you know what? Leave and let the Wolf stay tied up. Who cares?

With zombies running amok they're probably all dead anyway. Heck, even if you limit the fatalities to only one person that person will probably be the guy whose chained up and can't go anywhere. If Carol was smart she could've probably orchestrated a plan that would end with the Wolf being used as zombie bait to help the others escape. Or, I don't know, just leave and let Morgan, Denise and the Wolf fend for themselves? Anything would be a better plan than the cluster fuck we got thanks to Carol's impulsiveness and blood lust.

Other Thoughts:
Ron trying to kill Carl in the midst of being surrounded by zombies didn't impress me either but it gets a bit of a pass because teenagers can be stupid.

I just hope that Carl covering for Ron means an end to that rivalry.

Maggie looks to be in trouble too. So, naturally, Glenn arrives in time to see Maggie in danger but what will happen!?

Whenever you have a post-apocalyptic setting and you start playing 1930's era pop music I can't help but think of Fallout. I mean, this is pretty much the opening to this episode.

But, yeah, Sam's pretty messed up. And, of course, seeing his mother almost literally transform into the monster he fears her to be isn't going to help.

Do we think Sam is going to blow Rick and company's cover? I know if Carol was there she'd just push Sam into one of the zombies or slit his throat to silence him or something but I don't think Rick has it in him so I'm not sure what will happen here.

And we say good bye to Deanna. I always kind of liked her more than I should. Maybe I just like the idea of someone who actually wants to try and rebuild civilization.

Having someone be bit by a zombie thus making that person and their compatriots deal with their slow but inevitable demise is a well that this show probably goes to far too often...but it is still tough for me to watch.

In the end, Deanna goes out the way I'd hope I'd go out in the zombie apocalypse if I got bit, taking out as many zombies as possible because you literally have nothing left to lose.
Newer Post Older Post Home
Posted by Dr. Bitz at 1:38 AM