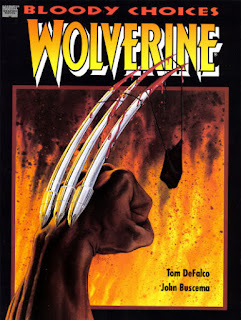 In a Nutshell
Wolverine teams up with, then fights, Nick Fury en route to killing a Hawaiian mobster and child molester.

Plot
On holiday in Hawaii, Wolverine intervenes when a small boy tries to assassinate Mr. Bullfinch, a local crime lord, and is attacked by Bullfinch's bodyguard, Shiv. Wolverine takes the boy to a doctor he knows, and learns he has been abused by Bullfinch, who still has the boy's brother imprisoned. Wolverine tries to track down Bullfinch but finds Shiv waiting for him, and after escaping, is joined by Nick Fury, who is in town to take down Bullfinch. Together, they attack Bullfinch's mansion, and Wolverine battles Shiv once again. Bullfinch ultimately escapes, but Wolverine's pursuit convinces him to cut a deal with SHIELD. This enrages Wolverine, who wants Bullfinch to pay for his crimes, particularly the ones involving children, but Fury insists they can save more lives by letting Bullfinch live and feed them information. After locating the SHIELD safehouse where Bullfinch is being held, Wolverine and Fury comes to blows, with Fury fighting his best to honor his promise to protect Bullfinch but Wolverine ultimately prevailing, after which he chases down Bullfinch and kills him.

Firsts and Other Notables
This was originally published as a prestige format, squarebound, magazine-sized graphic novel, priced $12.95, and I believe it was technically released as part of Marvel's Graphic Novel line (though they were no longer numbering them at this point, it would have been #67). It features a rather overblown introduction from editor Ralph Macchio, who really tries to sell this story as something thematically significant and, overall, as a BIG DEAL. 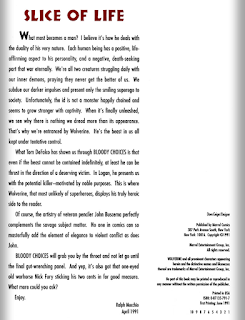 Shiv is teased as possibly being Wolverine's brother; they look similar (at least in terms of their hair), Shiv seemingly has a solo metallic claw, and he calls Wolverine "bro", but this idea is ultimately dropped in the story, and Shiv has yet to appear again outside this story. 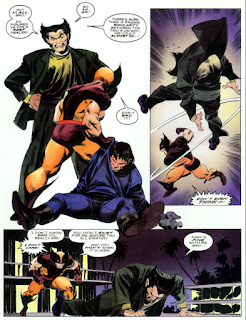 Nick Fury guest stars in this issue, the only character other than Wolverine to appear before or after this issue.

We meet another of Wolverine's patented "old friend we've never seen before nor will ever see again" in the shady Doc Corbel, who runs a clinic on Hawaii. 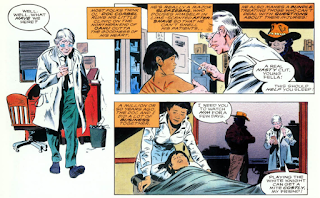 The Chronology Corner
This is considered to take place between issues #44 and #45 of Wolverine (well, between the opening page setting up the fill-in story of issue #44 and #45, technically), and, more generally, in the gap between the end of "The Muir Island Saga" in X-Factor #70 and X-Men (vol. 2) #1 (which is where a ton of Wolverine guest appearances in other titles around this time, most of which we're not covering, take place).

A Work in Progress
Despite coming to blows later in the story, the initial relationship between Nick Fury and Wolverine is much more cordial than one would expect, given their last encounter in Wolverine #42-43, in which Wolverine was pissed at Fury for withholding secrets about his past with Sabretooth. 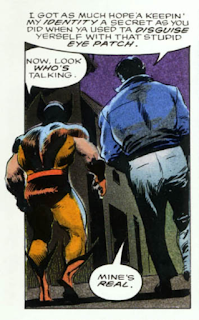 Wolverine's encounter with a young boy makes him recall another young boy, the one about whom he told a story (and may or may not be Wolverine himself) in issue #25. 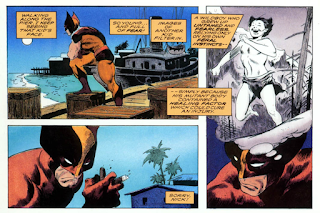 The Reference Section
Wolverine gets mistaken for Batman (excuse me, Bat Guy).

Teebore's Take
Despite what Ralph Macchio says in his rather overblown introduction to this issue, this is a pretty standard Wolverine story; certainly by today's standards, and really even by 1991's. Wolverine is in a vaguely-exotic locale, runs afoul of some kind of local evil, fights local evil's superpowered henchman, struggles with controlling his animalistic side in the face of said evil, and either succeeds or fails depending on how artsy the writer is feeling. This particularly story adds an additional wrinkle via the presence of Nick Fury, who sets up a "lesser of two evils" conflict between his goal and Wolverine's (though DeFalco certainly stacks the deck in Wolverine's favor by making Bullfinch an out-and-out child molester, which robs their conflict of some of its impact), and the John Buscema artwork looks especially lush in the prestige format. This could work as a perfectly serviceable but unexciting annual with some especially nice art, but it doesn't exactly earn its prestige format, and in no way, shape or form is it worth thirteen 1991 dollars, no matter how many overblown introductions it has trying to sell the idea that it's somehow deeper and more significant than an average issue of the regular series.

Next Issue
Tomorrow, Beast gets the Liefeld treatment in Marvel Comics Presents #85-92. Friday, a look back at the first 70 issues of X-Factor. Next week, Scott Lobdell's Excalibur "run" ends with Excalibur #41.