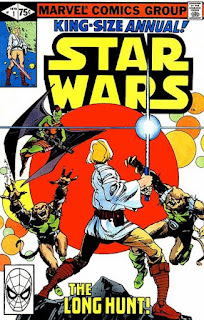 In a Nutshell
Luke fights in the shadow of his father as the Star Warriors help free the planet of Skye from Imperial rule.

Plot
On the planet Tirahhn, Luke and Leia are attacked by a pair of Catuman Warriors on orders from Kharys, Majestrix of Skye, who recognizes them as Imperial fugitives. They're rescued by Han & Chewbacca, and Han, who knows Kharys from his smuggling days, decides to take the fight to Skye. However, the Millennium Falcon is shot down by TIE fighters in the skies over Skye. Forcing Luke & Leia into an escape pod, they are found by a rebel faction of the native S'kyri led by Aragh who, recognizing Luke, decide to help them rescue Han & Chewbacca from Kharys. As Han is tortured by Kharys for information about Luke, Leia, Luke & their S'kyri allies attack her citadel. With Luke drawing the attention of Kharys' forces, Leia sneaks inside and rescues Han & Chewbacca. Outside, Kharys joins the fight, drawing her own lightsaber and engaging in a duel with Luke in the sky above the citadel. Eventually, Luke defeats Kharys, killing her and thus freeing the planet from Imperial rule. In the aftermath, Aragh tells Luke that during the Clone Wars, their planet was saved due to the help of Obi-Wan Kenobi and his two pupils. One of those pupils, Darth Vader, later returned and used the debt owed to him to enslave the S'kyri, appointing Kharys the majestrix. Luke asks who Obi-Wan's other pupil was, and Aragh simply tells him he carried the same lightsaber as Luke.

Firsts and Other Notables
This is Star Wars first annual; though the series will run until 1986, it only has three annuals in total (it takes a couple years off after this one, does two more, then quits). This story was initially commissioned as a two-parter, but was rolled into one to make for a double-sized annual.

Arguably the most notable thing about this issue is the ending, which reveals that Obi-Wan Kenobi and his pupils, Darth Vader and Luke's father, visited Skye during the Clone Wars and saved the S'kytri, thus indebting them to the three men, which Darth Vader later took advantage of to put the planet under Imperial rule. Of course, we now know that's not possible, as Luke's father and Vader are the same person (unless Aragh is, for some reason, obfuscating the facts on an Obi-Wan like level for some reason). 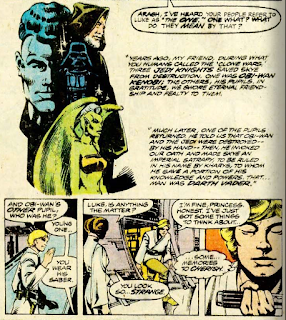 What makes this particular story beat interesting is how close to the release of The Empire Strikes Back this issue was published (it was on sale about six months before the movie came out, aka well past the point when the script would have been written and mostly finalized). Obviously, if this was originally commissioned as a fill-in inventory story, it could have been written much earlier relative to its on sale date and just sat in a drawer for awhile. But even then, it would have had to have been approved by LucasFilm at a time before Lucas had decided on the big Vader revelation, or else LucasFilm, perhaps more focused on the runup to the release of Empire, simply wasn't paying as much attention to comics when this one was submitted for approval.

Katya M'Buele makes her first, and last appearance in this issue. An old smuggling associate of Han (with whom he seems quite friendly), she ends sup dying in the course of the story. 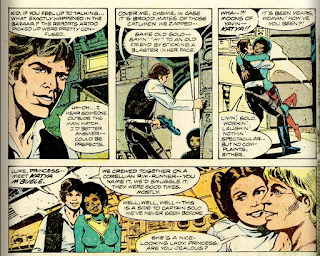 As bonus material, the original covers to Marvel's UK Star Wars series (which is published weekly, necessitating the monthly issues getting broken up into smaller chunks and thus warranting more covers) are reproduced (poorly, at least in my scans) at the end of this issue, four to a page. 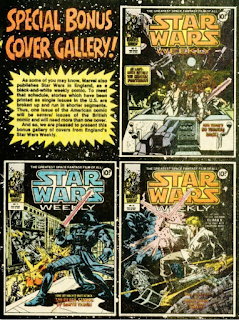 Mike Vosburg, probably best known for his work on Marvel's GI Joe, pencils this issue, while Steve Leialoha, who inked some of the series' earliest issues, inks it. The end result is quite nice, giving the whole thing an almost fantasy comic strip look that fits the tone of the story. It's a shame we don't see this pairing of artists again in the series.

The cover is drawn by future series penciler Walt Simonson.

The Chronology Corner
Most collections place this issue as occurring between issues #30 and #31 of the regular series, which is why I'm examining it now. However, the internal chronology doesn't really support that, as Han and Chewbacca are still technically still on Orleon at this point, and won't be reunited with Luke until issue #31. Thus, the events of this story most likely take place during a gap in time that occurs in the early pages of issue #35, at least far as Wookieepedia is concerned.

A Work in Progress
Narration says that the Empire consists of "millions of star systems and thousands of worlds".

The Catuman Warriors employed as heavies in this story are reminiscent of the Noghri from Timothy Zahn's Thrawn trilogy, in terms of their feline-inspired look and reputation as ferocious fighters. 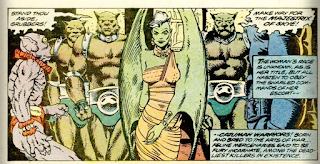 On their way off Tirahhn, the Falcon is said to pass a Tagge family ship, a quiet nod to one of the series' ongoing non-Vader antagonists/plotlines.

The smoke monster sent by Kharys is said to be a creation of the Force, indicating that Vader has been training Kharys (she later wields a lightsaber as well). Leia also notes that Luke's reaction to his encounter with the creature is also similar to his inadvertent contact with Vader's mind in "The Wheel Saga". 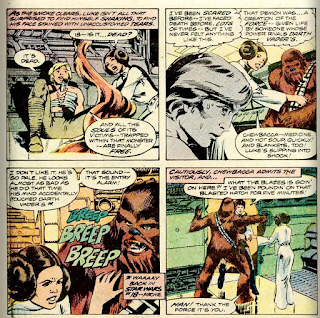 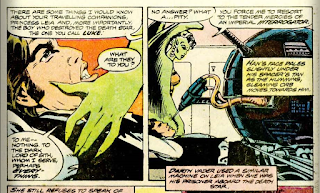 Luke mentions that he flew gliders back on Tatooine, before he built his T-16 Skyhopper.

Han compares Leia's poorly thought out rescue plan to one of his own.

In dueling with Kharys, Luke notes that Obi-Wan was barely able to give him any training in lightsaber combat.

Um, Actually
A pair of Stormtroopers wager "kilobucks"; the more generic "credit" eventually settles in as the standard term for money in the Star Wars universe.

You Kiss Your Sister With That Mouth?
Luke's attraction towards Leia is noted.

Teebore's Take
Star Wars, across all its various iterations, has always been much more space opera than science fiction, more concerned with exploring fantasy tropes in a sci-fi setting that exploring the impact of science on individuals or societies (rare are the stories which, for example, examine the impact of faster-than-life travel on a planet's economy). The story in this issue embraces those more traditionally fantasy elements, positioning Luke overtly into a Chosen One narrative and featuring more fantastical, winged aliens. But it's also a very classic Star Wars story, featuring the heroes helping a planet escape the yoke of Imperial control and dealing with the still-developing role of Luke's family in galactic history. To its benefit, the issue also uses the entire cast in one story effectively, something the regular series continues to struggle with consistently.

Han's old friend Katya is ultimately wasted, a potentially-interesting character that brings out a unique side to Han who, unfortunately, gets fridged in the service of building up the threat of the villain (made more egregious by the fact that Kharys is one-and-done by design). And the ultimate payoff to this issue, that Luke is following in his father's footsteps and helping right one of Darth Vader's wrongs, is robbed of some of its impact in hindsight, reduced instead to a historical curiosity, a remnant of a narrow time before one of the defining elements of the Star Wars saga had been set in stone (and when licensed fiction could still operate slightly under the radar of its parents company). Those criticisms aside, this actually makes for a fun, double-sized read, one which embraces the more fantastical elements built into Star Wars' DNA while at the same time still fitting the aesthetic of the universe.