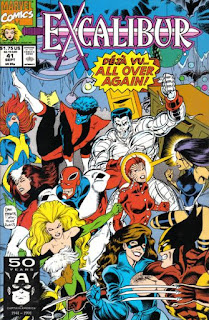 In a Nutshell
Excalibur reunites with the X-Men, who turn out to be the Warwolves in disguise.

Plot
Excalibur and the X-Men reunite at a pub, though Kitty is still sore about being left in the dark about the X-Men's survival, and leaves to visit Lockheed at the hospital. Meanwhile, a criminal being transported in an armored car infuses a magical gem with the spirits of his associates, while Storm visits Kitty at the hospital, and the pair reconcile. Outside, the gem is tossed free of the car, and the energy emanating from it possess nearby office furniture, which sets about attacking people. As Excalibur and the X-Men attack the furniture, Dai Thomas arrives on the scene, suspicious of the X-Men. He shoots Colossus, who turns out to be one of the escaped Warwolves. His discovery prompts the rest of the X-Men to reveal themselves as Warwolves, and the group tries to fulfill their original mission by capturing Phoenix. They merge to form a portal to Mojoworld, but as the rest of Excalibur frees Phoenix, Nightcrawler tosses the gem at the Warwolves, just as the portal closes, eliminating both their problems. In the wake of the Warwolves' masquerade, Excalibur decides to make long overdue contact with the X-Men, for real this time, as both Nightcrawler and Kitty agree that their place remains with Excalibur.

Firsts and Other Notables
Excalibur seemingly reunites with the X-Men in this issue, but they turn out to be the Warwolves in disguise. In the end, Excalibur decides to reach out to the X-Men themselves, at least confirming that Excalibur is aware the X-Men are alive, and ending the estrangement between the two teams (albeit off panel).

The timing of Excalibur's call to the X-Men is odd, in that Cable answers their call, their suggesting this story takes place before the New Mutants left to become X-Force. Yet on the screens around Cable are representations of the upcoming post-relaunch rosters of the various X-books, including the new X-Factor and X-Force. Presumably, those images are meant to be representational to us, the readers, and not an accurate reflection of what Cable has on those monitors in-universe. 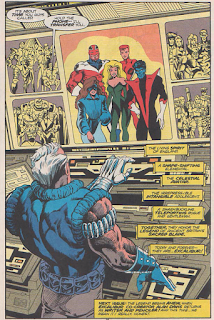 Despite the return of the X-Men, whose deaths motivated the formation of Excalibur, the team decides to remain together, essentially to act as the UK/international X-Men (which gives them via a simple line of dialogue more purpose than they've ever displayed in the series thus far). 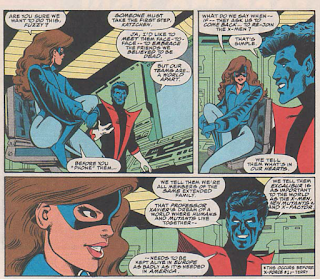 This is the final issues of Scott Lobdell's initial fill-in run (though he's joined by Dana Moreshead for this issue), which was both not as terrible as it could have been but also not terribly good, either. It is also not the last we'll see of Lobdell on this title.

The Warwolves, last seen chilling in the London Zoo, are revealed to have escaped, but they are effectively destroyed (or returned to Mojoworld; it's not clear) this issue, effectively writing them out of the series.

The cover of this issue is an homage to the cover of the first Excalibur issue, The Sword is Drawn/Special Edition one-shot.

A Work in Progress
It's confirmed that Excalibur learned about the X-Men's survival via the news coverage of "X-Tinction Agenda", and simply hasn't talked about it amongst themselves, or reached out to the X-Men, since.

Rachel also acknowledges that she knew the X-Men were alive prior to that, as a result of "Days of Future Present", but that she kept that information to herself. 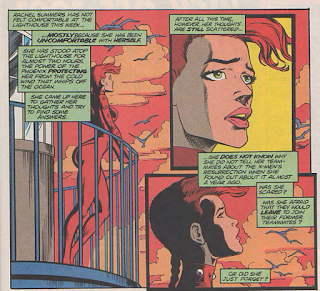 The Reference Section
It's noted that the British police in this issue have armed themselves in the face of the Warwolves' threat, a nod to the fact that the police aren't regularly armed in the UK. 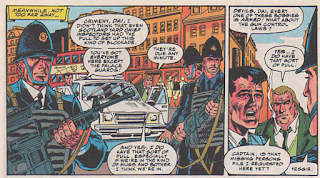 Kitty refers to herself as a teenage mutant ninja which, while not inaccurate, seems phrased in such a way to make us think of the famous amphibian variety of the same.

Rachel Summers, Crybaby
Rachel is reduced to tears, worried that everyone would have been better off without her traveling through time. 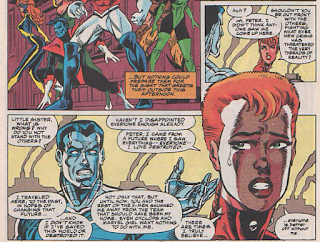 Teebore's Take
I'm not quite sure what to make of this issue. On the one hand, presenting a long-overdue reunion between Excalibur and the X-Men, only to reveal the X-Men are impostors and pushing the actual reunion to occur behind the scenes seems like a pretty big dick move. On the other hand, the ruse was done in the service of tying up another lingering plot thread from the book's early days, so there was a purpose to it beyond just "mess with the audience expectations", and in the end, Excalibur does (finally) reach out to make contact with the X-Men (though, to be clear, phones work two ways, X-Men!), and declares their intent to remain together even though the initial impetus for their formation is gone, in the process providing a nice capstone to this pseudo-run and tying the book more closely to the big relaunch (in that this book has also cleared its deck a bit, in anticipation of a new creative direction).

So, for all practical purposes, the issue accomplishes its goal despite the ruse, and, if we want to be charitable, we can probably assume that any of the actual interactions between Excalibur and X-Men probably mirrored the interactions between Excalibur and the Warwolves pretending to be X-Men. Still, given that Excalibur formed specifically because its members believed the X-Men to be dead, it feels like the series really should have given us a proper, onscreen reunion, or, barring that, at least not faked us out by falsely presenting one.

But whatever, Alan Davis is back next issue, and our long, aimless, Excalibur nightmare is, finally, at an end.