Hill Street Blues is significant while reviewing the work of David Milch, not only as his first TV writing job, but also as the first series overseen by Milch as an executive producer.  Hill Street (created by Steven Bochco and Michael Kozoll) was considered groundbreaking television at the time, with its focus on realism and episode-to-episode continuity, not to mention the dramatic break from traditional television camera work, as evidenced by the use of handheld cameras in place of studio (floor) cameras.

While doing research on the show, I was surprised to learn it was a low-rated critics’ favorite during most of its lengthy run on NBC.  Even though I was an infant when it premiered, it stayed on the air long enough for me to at least have some awareness of its existence during my childhood.  And its impact on pop culture during this time seemed to be inescapable (the sergeant’s warning to the cops during their morning Roll Call: “And remember, let’s be careful out there!” was a common catchphrase during this era.)  Hill Street also had an influence on the comics of this era, to bring it back to the usual focus of this site.  Chris Claremont was a fan, and I believe the show inspired an element of Claremont’s work that sticks around to this day -- his tendency to humanize beat cops, even if they’re only in a few pages of the story. 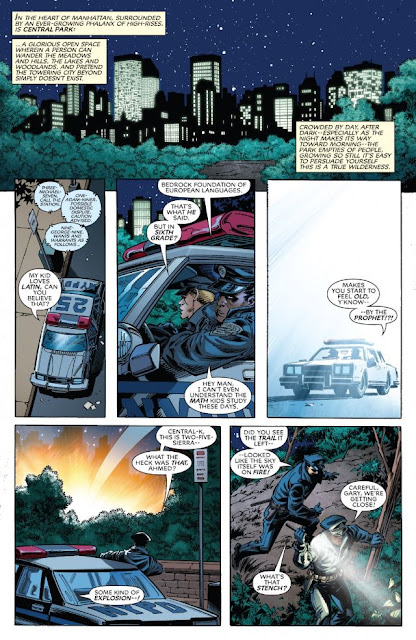 A few facts about Hill Street Blues before we begin…
There are two major inspirations for this series -- Ed McBain’s 87th Precinct novels (which began in the 1950s with Cop Hater, which you can read for free on Amazon’s Kindle Unlimited service), and a 1970s documentary called The Police Tapes.  The 87th Precinct novels were apparently the first police procedural novels, with the writer basing his stories on how police actually work cases in real life, after committing months of intensive research.  Supposedly, Ed McBain wasn’t happy with the show borrowing so liberally from his work, but later came around to the series.  The Police Tapes was a 1977 documentary about the NYPD, shot with handheld cameras.  Hill Street Blues is clearly an attempt to create a TV drama that looks “real” and has stories more plausible than the Starsky and Hutch television that preceded it. 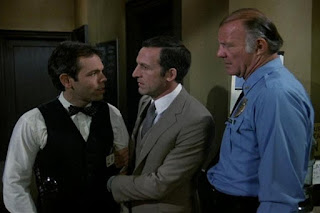 The series’ star is Daniel J. Travanti, who plays the impossibly straitlaced Capt. Frank Furillo.  Capt. Furillo has his hands in practically everything that happens in the precinct,  an idea that later cop shows co-created by Steven Bochco wouldn’t begin to entertain.  His girlfriend, and later wife, is public defender Joyce Davenport (played by Veronica Hamel, who’s a dead ringer for Wonder Woman era Lynda Carter) who is often at odds at work with Furillo, even though Furillo is consistently portrayed as a staunch civil libertarian in the episodes I’ve seen.

The series takes place in a fictional city, which is a blend of Chicago, Buffalo and Pittsburgh.  I was surprised to discover this while researching the show, because for some reason I always assumed the show was set in Chicago.  Why, I have no idea, but the Wiki page for the show does present an argument that the show is more Chicago than any other city.  The police cars in the show are even Chicago patrol cars. 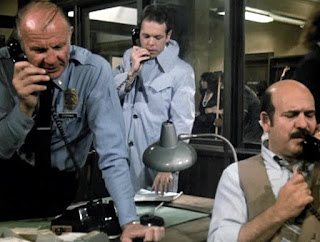 Other notable characters on the show include the gruff Det. Mick Belker (who might as well be the “Wolverine” of the show), played by Bruce Weitz, who was nominated for the Emmy for Outstanding Supporting Actor for every year of the series, except the final season...Sgt. Phil Freemason Esterhaus (Michael Conrad), the fatherly patrol sergeant and deliverer of the show’s famous catchphrase, who we learn is dating a teenager in the pilot (yet is never really portrayed as a pervert...times were different, I guess)...Det. J. D. LaRue (Kiel Martin) and Det. Neal Washington (Taurean Blacque), the two young, “hip” detectives that I’m going to guess served as inspirations for Crockett & Tubbs on Miami Vice (which was created by a Hill Street alumni)...Sgt. Henry Goldblume (Joe Spano, who goes on to play John Clark, Sr. during the final years of NYPD Blue)...and many, many more.  Hill Street is packed with characters; not only beat cops, but detectives, sergeants, lieutenants, captains, and representing the other side of the fence, recurring crooks, prosecutors, and public defenders.

Watching some of the early episodes of Hill Street, I can see a clear influence on the first season of NYPD Blue; although, honestly, most of the Hill Street elements are the ones dropped after the first season.  After Season One of NYPD Blue, the show cares little about lawyers and uniform cops, and doesn’t attempt to present a comprehensive view of the legal system -- it’s a show about detectives, and after they hand a case off to the prosecutor, it’s usually forgotten.  Blue also dropped those car chases very quickly, and features much more nuanced characterizations of established cast members. Hill Street Blues, at least in its early seasons, tends to play its characters quite broadly.  If you’ve ever seen some of David E. Kelley’s work, you’ll have an idea of how much of the Hill Street regulars are written.  (Kelley was also mentored in television by Steven Bochco.)

One aspect of Hill Street that does surprise me is just how visually innovative it is.  Not only is it shot like a documentary (mostly in the opening Roll Call scenes; the rest of the scenes are far less shaky), but the show rarely features establishing shots.  Most TV dramas, including Blue, love those scenes. Not only exterior shots of buildings, but montages of just people going about their business in the street, setting the “mood” of the city.  Practically none of that on Hill Street; if you see different characters in a new setting, you’re supposed to automatically infer that the scene has changed.  No transitions to hold your hand.  The show also rarely employs any type of score, putting it more in line with today’s more serious dramas.  Contrast that with NYPD Blue, which for some reason, felt the need to have music sell practically everything that ever happened in the series. 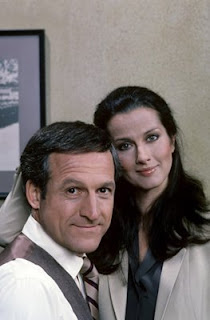 Hill Street Blues is from another era, in terms of how minority characters are portrayed.  And certain words that are deemed so offensive they’d never appear on network TV today pop up fairly regularly, even though in terms of traditional profanity, the show doesn’t go much further than “hell” or “damn.”  The episodes I’ve watched from the first two seasons can be a little hard to get into, given that almost every element of the show has been adopted by other TV dramas, and the fashions can occasionally be distracting.  Just accepting the show on its own terms, however, I found many of the episodes passing by fairly quickly, even if the show has noticeably aged.  Also, this is likely heresy to many people, but I’m not really a fan of the Capt. Frank Furillo character.  Perhaps I’m spoiled after years of James McDaniels’ excellent performance of the pent-up Lt. Fancy on NYPD Blue, but I have a hard time accepting the rigid, didactic Capt. Furillo as a believable cop-boss.  He’s very reminiscent of the '70s/early '80s “sensitive male” Alan Alda-style hero that Berke Breathed routinely mocked in the early days of Bloom County.

Arriving in Season Three, not long after David Milch, is Dennis Franz as the oily Det. Sal Benedetto.  I’ll take a look at the Benedetto story arc, along with some of Milch’s other early episodes, in my next post.