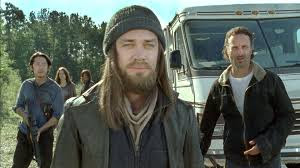 Ooooh boy...of all the episodes of The Walking Dead this was certainly one of them. There were...people...zombies...talking. Rick's group traveled to a new town. And...uh...well...

The episode starts out with Jesus, due to appallingly lax security by Daryl and the fantastic, innate navigational abilities by Jesus, in Rick and Michonne's house. Jesus just wants to talk. He knows Alexandria is low on food and is thinking some trading is in order.

So Rick and company are off to Hilltop. After a brief stop to save Jesus' crew trapped in a zombie infested building, they arrive.

There is some interesting tension and a negotiation would ensue but it really didn't really capture my attention. Maybe I just wasn't into it because this is The Walking Dead so Rick's crew's only asset is violence. They displayed it in the aforementioned zombie building and after some Hilltop people attacked Gregory, the Hilltop leader, on orders from Negan (who is the basically the Hopper to Hilltop's ant colony). (Rick killed the Hilltop traitor.)

With the strength of Rick's group on display a deal is struck. Alexandria gets food if Rick and company take care of Negan. Maybe that's why this episode fails. The idea of two towns trying to build trust and trade in an anarchistic society could be interesting but, for Hilltop, this deal is a no-brainer. Either Rick's group fails and they continue to give food to Negan or Rick's group succeeds and they give food to Alexandria. Hilltop may prefer Rick to Negan but, in the end, it's a very low risk proposition which really eliminates any drama.

Other Thoughts:
Last post I asked if Maggie was still pregnant. I got my answer! But...how long has it been? Why isn't she showing?

So Abraham likes Rosita AND Sasha? Well, if the first two seasons taught us anything it's that one thing zombies can't kill is love triangles.

I believe Jesus says Gregory keeps the trains running on time. I feel like people need to look up that reference before using it as a compliment.

So why is Maggie now the negotiator?

So Negan's group are called the Saviors. That means Jesus is against the saviors?

And Jesus is in favor of killing?

Daryl always wants more and it amuses me for whatever reason. First he wanted that wooden carving now he wants a cow. (I know, I know, cows are useful.)

So will Rick's group treat Hilltop nicely after this deal is done?

I still question where they get the electricity for stuff like an ultrasound.

How did the van get unstuck from the mud?
Newer Post Older Post Home
Posted by Dr. Bitz at 12:02 AM