Force in Focus: Splinter of the Mind's Eye 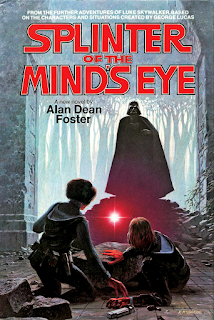 Published in 1978, not long after the initial release of Star Wars, Splinter of the Mind's Eye is the first full-length original Star Wars novel to be published after the movie, making it retroactively the first book in what would later be dubbed the Expanded Universe. It features Luke and Leia, and details their adventures on the swampy planet of Mimban, where they crash land en route to recruiting a different world to join the Rebellion. On Mimban, they run afoul of a secret Imperial mining operation but end up befriending a group of natives. As the natives battle the Imperials, Luke and Leia race Darth Vader to a nearby temple containing the Force-amplifying Kaiburr Crystal (the titular Mind's Eye), where the pair duel the dark lord, ultimately defeating him and living to fight another day.

The novel is written by Alan Dean Foster, who ghost wrote the Star Wars novelization (which was published with George Lucas as the author). His contract was a two book deal, with Splinter representing the second book, and was conceived to be used as the basis for a low budget sequel to Star Wars should the movie flop. Those circumstances explain some of the choices Foster made in the narrative: it takes place entirely on one planet (making it cheaper to film), events on said planet take place entirely indoors or in a misty jungle (cheaper to film) and the story involves only Luke, Leia and the droids (because Harrison Ford wasn't under contract for all three original films, thus not guaranteeing his return for a sequel). Aside from the general edict of "make it filmable as a cheap sequel", Foster was more or less given free reign to develop the story as he saw fit; according to Foster, the only specific request Lucas made upon reading the manuscript was the removal of an opening space dogfight that led to Luke and Leia crashing on Mimban, as a space battle would have been too expensive to film (instead, they crash due to an equipment malfunction). 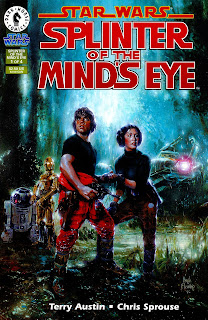 The book as a whole is okay. It suffers from its limited scope, taking place entirely on one planet in fairly generic settings, and there's some really uncomfortable gender politics going on, as Luke admonishes Leia for not following his lead, then Leia is later forced to masquerade as Luke's serving girl and Luke, in turn, is forced to strike her in order to perpetuate the ruse (later, they fall into a mud puddle and playfully fight one another). There's also some cliche "noble savage" material with Luke and Leia running afoul of the native Mimbans and Luke being forced to best their leader in combat, after which the Mimbans pledge him their loyalty. And the ending, in which Luke and Leia battle Vader, is problematic on a number of levels, including the fact that it ultimately robs the ostensible heroes of any agency in their victory (in the end, Vader is about to kill Luke, but falls into a pit just as he's about to strike a killing blow). In the end, this isn't necessarily a bad sci-fi novel; it's just not a terribly good Star Wars one, lacking a lot of what traditionally goes into a Star Wars story.

Ultimately, aside from being the first bit of licensed Star Wars fiction (which is nothing to scoff at, and mostly responsible for the continued popularity of the book), Splinter is mostly remembered for its anachronisms caused by later revelations in the saga: Luke and Leia don't exactly make out with each other throughout the story, but Luke's attraction to Leia does not go unremarked upon, and it could said that the pair flirt with each other throughout. Furthermore, the climax of the book involves Luke and Leia fighting Darth Vader, with both taking turns wielding a lightsaber against him; Vader toys with Leia, giving her superficial burns with his saber, while Luke holds his own in part because the spirit of Obi-Wan takes control of Luke's body and helps him directly fight Vader, leading to Luke cutting off the villain's (entirely cybernetic) arm. All in all, it's a fairly big confrontation that robs the later Luke/Vader fight in The Empire Strikes Back of some of its impact, with the whole "possessed by Obi-Wan" thing coming across more silly than anything. 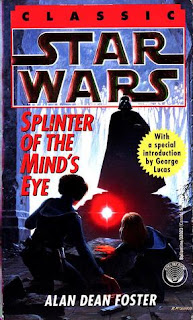 Other Notes:
Thanks to his involvement in the Star Wars novelization, Foster was given access to a lot of behind-the-scenes material prior to the release of the film, and some of that made it's way into the novel. The prologue of the book borrows the "From the Journal of the Whills" convention shared by the novelization, for example.

Also, the Kaiburr Crystal MacGuffin is lifted from early drafts of the screenplay, where Lucas had it as the thing both sides were trying to get (kind of what Artoo's Death Star plans became). The Kaiburr Crystal is one of those things Star Wars can't seem to get away from; it's all over several drafts of the original screenplay, before Lucas decided it detracted too much from the story of Luke and made the Force less generic; it gets used in this novel and, later in the EU becomes the source for the crystals used in several characters' lightsabers; The Clone Wars then changed the spelling and it was eventually declared that the crystals used in all lightsabers were Kyber Crystals, found mainly (but not exclusively) on the planet Ilum.

In the book, Vader knows that Luke was involved in the destruction of the Death Star (though he erroneously says Luke shot up Vader and his wingmen during the battle; that was Han), something the old canon was always a bit hazy about and which the new canon handled via early issues of the Star Wars/Darth Vader comic book series.

Vader is also described as wielding a blue, not red, lightsaber. 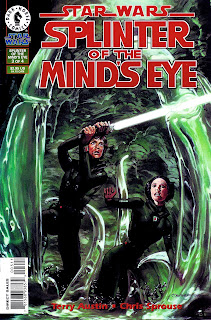 Mimban, with its misty, damp, swamp-like settings, may have been an inspiration for Dagobah. Of course, Dagobah was just one setting of several in Empire.

As much as the ending of the book is fairly wonky, it is fun to see Leia wielding a lightsaber in combat, something that has yet to happen in any of the films, and which took until the 00s for even the old Expanded Universe to get back around to after this novel.

Another funny thing about the ending: the story concludes with Luke in possession of the Force-amplifying Kaiburr Crystal, yet it never comes up or is seen again. Seems like something that might have helped him during his battle with Vader in Empire.

Not surprisingly, the cover by concept artist Ralph McQuarrie is pretty great; it's a shame he's didn't contribute more covers to the EU at any point in time.

In the 90s, this series was adapted into a limited comic book series by Terry Austin and Chris Sprouse. Though it added in some elements from Empire, it mostly stuck true to the book, including the things (like Luke and Leia's flirting or the awkward gender politics) that had, by then, been rendered anachronistic by other stories and the simple passage of time.
Newer Post Older Post Home
Posted by Austin Gorton at 12:00 PM