The Walking Dead 6x10: The Next World 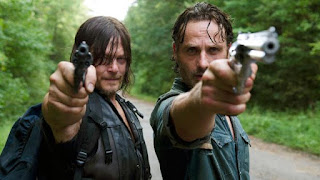 I know, I know, I'm not breaking any news. But it's true, zombie don't exist and zombies (at least presented in traditional zombie movies) can never exist. Zombies defy the laws of physics, specifically law of conservation of mass. On a scale of 1 to 10 (1 least likely, 10 most likely) the likelihood of a zombie outbreak actually occurring is approximately -10,050,100,770.3691.

So, obviously, when watching The Walking Dead you need to suspend your disbelief. Believing in the zombie apocalypse is already a huge detour from reality. So, why then, is it so hard to swallow when the show introduces a man whose nickname is Jesus and is clearly magic?

"The Next World" jumps ahead two months from the previous episode and things in Alexandria seem pretty hunky-dory. However, food looks to be in short supply. So Daryl and Rick venture outside the walls in search of food.

Rick and Daryl actually find a nice stash of food conveniently placed in the back of a shipping truck. Everyone has seen this story before. This is The Walking Dead, that food truck is the sword of Damocles hovering above us by a thread. It metaphorically falling on us is only a matter of time.

As Rick and Daryl are packing up when a random man runs into them. He's bearded so naturally his nickname is Jesus. Jesus claims there are zombies behind him and, after some sizing up, Rick decides he likes him. Daryl hates him because...Daryl is a xenophobe now? I suppose having his bike and crossbow stolen by supposed allies has left him jaded. It's understandable but I don't like it. I like good Daryl!

Here's a tip for Rick and Daryl. When you hear gunshots and you have a truck full of food, maybe you should just hop into the truck and drive off. Or, if you need to investigate, take the keys to the truck with you.

Anyway, Rick and Daryl catch up to Jesus and his truck. They attack Jesus but it turns out Jesus knows kung fu. However, one kung fu Jesus is no match for the combination of Rick and Daryl. So Jesus ends up tied up and Rick and Daryl drive away with the food.

Rick and Daryl FINALLY hear Jesus on top of the roof and a sudden stop gets him off. There's an odd chase through a crop field. Eventually the truck is parked precariously near a hill next to a lake. Daryl and Jesus fight and Jesus proves himself not be a murderer. Naturally, in the course of this fight the truck is put into neutral, rolls into the lake and sinks to the bottom. What else down falls the sword of Damocles.

Jesus is brought back to Alexandria and locked in a room. Daryl is supposedly guarding the room but Jesus, I guess, teleports out of the room and into the bedroom containing a post-coitus Rick and Michonne (oh yeah, that happened too). I mean, I don't KNOW that Jesus teleported but it was either that or he managed to unlock the door and sneak past Daryl and know exactly where Rick's house was, sneak into that house and into his bedroom without being detected.

So, yeah, teleportation may be the best explanation. I'm not sure why that seems so far-fetched. Teleportation is just as realistic as zombies.

I'm from the midwest so I'm like Denise. I say pop.

There's that zombie impaled at the entrance of Alexandria. It wouldn't be too difficult to just kill it, right?

Wasn't Maggie pregnant? Was I imagining that? Is she still pregnant?

So when Rick and Daryl find a truck full of food and decide to take it, are they sure it isn't somebody else's?

So Jesus is wearing a stocking cap this entire episode. These days, if I were Rick and Daryl, the first thing I'd do is ask a person to show me their forehead just to make sure there are no W's.

It's nice that Spencer got to kill his mother's zombie...I guess. Still, he seemed to kill her in the most dangerous way possible.

The Walking Dead is the only universe where declaring that you'd kill someone is considered a sign of affection.

This is where I'd bring up that, considering how long Jesus was unconscious, he'd be facing some serious brain damage. But, again, he's magic.

I just have to point out again that I hate, hate, HATE xenophobic Daryl. I love Daryl. I don't want him to become Carol.
Newer Post Older Post Home
Posted by Dr. Bitz at 1:33 AM