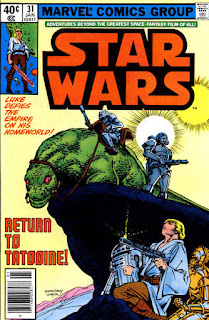 In a Nutshell
Luke returns to Tatooine, and runs afoul of Baron Tagge.

Plot
In deep space, Baron Tagge meets with his brother Ulric, announcing that their family's revenge on Darth Vader will come to fruition on the backwater world of Tatooine. Meanwhile, Luke has returned to his homeworld on orders from General Dodonna to recruit some additional blockade runners. Concerned by the sudden increase of Imperial activity on the planet, Luke and the droids head for Mos Eisely, stopping along the way at Luke's old home, where he runs into his old friends, Fixer and Camie, now married and working for the Tagge family. Hoping to avoid another Imperial patrol, Luke heads into a nearby canyon, where he encounters a bantha, seemingly frozen to death. But before he can investigate, Stormtroopers arrive and blast the bantha to pieces, prompting Luke to vow to discover what's going on once he's completed his mission. 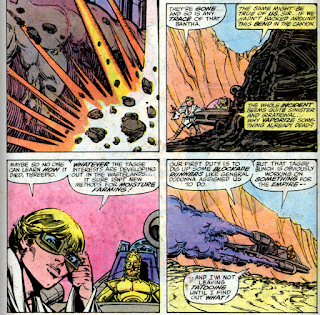 Meanwhile, Baron Tagge meets with another brother, Silas, on the planet, declaring that he's not too concerned by the security breach which allowed the bantha to escape. That night, Luke arrives in Mos Eisley and enters the cantina, looking for pilots to recruit to the Rebellion. Inside, he runs into Han and Chewbacca, but moments later, Stormtroopers enter, tipped off by Fixer. Blasting their way out, Luke, Han and Chewbacca race into the desert aboard Luke's landspeeder, escaping the Stormtroopers. However, one of their blasts hit the speeder, causing it to leak coolant; if one of the Imperial patrols doesn't find them, then the desert will finish them off.

Firsts and Other Notables
Mentioned previously, this is the first appearance of Baron Orman Tagge's younger brother Ulric, an officer in the Imperial navy. At the time, Ulric Tagge was intended to be the same Tagge as the one seen aboard the Death Star in Star Wars, but given confusion through the years as to whether or not General Tagge survived the Death Star's destruction, the Death Star Tagge became known as Cassio, with the character appearing in this story a third, younger, Tagge brother. 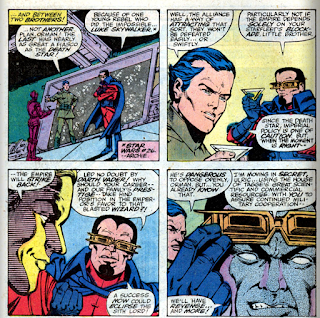 Additionally, Silas Tagge, ultimately a fourth Tagge brother, appears for the first time in this issue. Thankfully, he is not involved in the military, and is instead the scientific head of the Tagge company. Both Silas and Ulric, as well as Orman, will feature regularly in a handful of issues between now and The Empire Strikes Back adaptation.

Speaking of Empire, this issue contains the first overt reference to that film, as Ulric cautions his brother that while the Empire is being cautious with the Rebels right now, in the wake of their victory at Yavin, it's only a matter of time before the Empire,..strikes back!

Luke returns to Tatooine this issue, for the first time since he left during the events of the movie. While Goodwin could have had no idea it was coming at the time, I don't believe there's anything in Luke's dialogue in Return of the Jedi to suggest that was his first return to his homeworld, and certainly, this story won't be the last one to bring Luke back to Tatooine prior to Jedi.

Fixer and Camie, two of the local teens whom Luke hung out with prior to his departure from Tatooine, seen briefly in issue #1 as part of the Anchorhead scene that was ultimately cut from the film, return this issue. The pair has since married, and are now working for Tagge Industries, overseeing their local holdings on Tatooine. 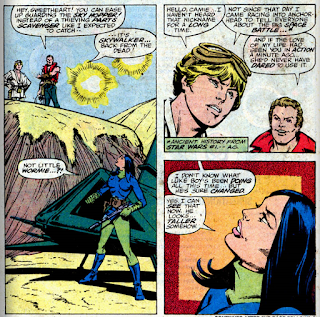 The Imperials on Tatooine are seen using a troop transport, a vehicle original to the toy line (it was designed to function as part vehicle, part carry case for figures), which came packaged with an eight page storybook to help sell the idea of the vehicle (since it was, at the time, the only toy to not appear in some form in the movie). The animated Rebels would, much later, canonize the vehicle by featuring it on the series. 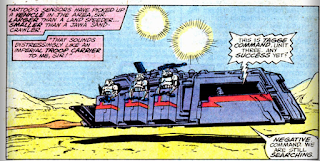 In an appreciated justification of how a supposed-backwater world like Tatooine keeps ending up in the center of important galactic events, Baron Tagge reveals he chose Tatooine, amongst all the various barren, sparsely populated worlds in the galaxy, as the site for the staging of his latest scheme, specifically because it is rumored to be the homeworld of Luke, who foiled Tagge's blockade of Yavin Four in issue #25-26. 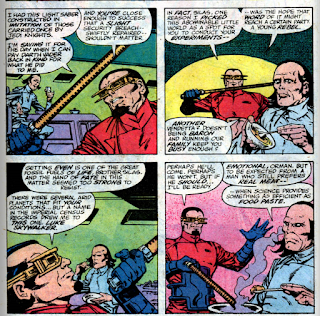 Luke is reunited with Han and Chewbacca this issue, bumping into the pair at the site of their first meeting, as they work to spend some of the money they received from Jabba after rescuing him at the end of issue #28. It is interesting to note that, while the beginning of The Empire Strikes Back implies that Han has been, effectively, part of the Rebellion since the end of the first film, this series suggests his involvement during this era is much more scattershot, with him perfectly happy to do his own thing so long as Luke or Leia don't need his immediate help.

A Work in Progress
Fixer notes that everyone who knew Luke on Tatooine thinks he died when his aunt and uncle were killed.

Fixer and Camie say they are working out of "the old Darklighter place", a reference to Biggs, though later stories will establish that there are Darklighters left on Tatooine, with Biggs' cousin Gavin eventually joining Rogue Squadron.

Artistic Achievement
Really nice opening splash on this one. Generally, I prefer more on-model ships to Infantino's tendency to just get the basic silhouette down and go nuts with everything else, but I really like this minimalist Star Destroyer (I like to think the detail is being drowned out by the light of a bright star behind the "camera") with the shadow of the Tagge ship projected on it. 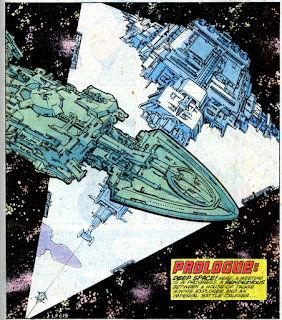 Teebore's Take
Similar to Han and Chewbacca dealing with Jabba the Hutt, bringing Luke back to Tatooine and having him reflect on how much he's changed since if he left is one of those obvious ideas for any story set after the events of the first film. To Goodwin and Infantino's credit, they make the most of what could be an otherwise routine adventure, bringing back Fixer and Camie (I have a soft spot for Fixer and Camie, and really, all the characters from that Anchorhead deleted scene), dropping Luke back at his old home and allowing him to reflect on the loss of his aunt and uncle (something the movie never really made time for), and having him re-enter the now-famous cantina where he first met Han and Chewbacca (Goodwin overscripts this a bit, telling what the art and plot are clearly showing, but there's no denying the impact that comes from contrasting the Luke who needed to be saved by Obi-Wan with this Luke, entering the cantina again having survived so much worse in the intervening issues).

Goodwin & Infantino are also smart to tie this return to Tatooine to the series' ongoing story arc involving Baron Tagge and his vendetta against Vader and, now, Luke. With The Empire Strikes Back looming (something readers at the time would have, at this point, been well aware of, as well as readers today), Tagge's efforts receive something of a time clock, hinted at by his brother in the issue's opening pages. Combining the two elements, a narrative thread left open by the movie and the series' own, original, subplots, results in an issue that reads, to its credits, very much like both a continuation of the story of the film, and the latest chapter in an ongoing, ever-unfolding, serial narrative.

Next Issue
Han, Chewie and Luke against the desert!