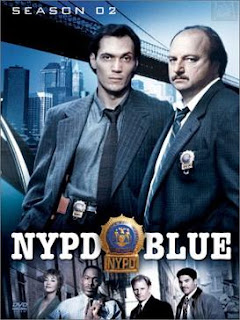 Following the debut season, which featured a season-long story arc punctuated by done-in-one stories and ongoing character arcs, determining the structure of the show for the second year didn’t leave the creators with an obvious way to go.  I’m not sure if anyone will tell you Season Two is better than Season One (Okay, I guess someone out there will; some people even argue that Mike Scully had the strongest run on The Simpsons), but for the most part, the series remains a solid police drama.  The largest problem facing the producers is how to write off David Caruso, introduce Jimmy Smits, and try to keep the show running smoothly during the transition.

Getting to Know…Jimmy Smits as Bobby Simone
Given the producers' problems with juggling two male leads in the previous season (or at least, the perceived problem by one of the co-leads), it’s a little surprising in retrospect that an established TV star was brought in to replace David Caruso.  Bochco and Milch must’ve had incredible faith in Jimmy Smits’ ability to craft a character that the audience could embrace, while also accepting that he wasn’t going to be the star of the show.  After Smits leaves the series, he’s replaced by two actors during the last half of the show’s run -- both of them former child actors who clearly aren’t intended as true equals of the Sipowicz character.  Maybe the producers didn’t think they could get that lucky again?  (While writing this, I had a crazy thought -- what if they brought in someone like Robert Downey, Jr. or James Spader to replace Smits?)

While Caruso’s character, John Kelly, is usually known by fans and other characters on the show as “Kelly,” Det. Bobby Simone is always “Bobby.”  This hints at Smits’ softer portrayal; he shares some of Kelly’s personality traits, but isn’t as rough-edged and is far less intense than Caruso’s character.

Another contrast with Caruso’s character -- Det. John Kelly was a second-generation cop, while Bobby Simone comes a rough neighborhood, and many of the kids he knew growing up are now in jail.  Season Four establishes that Sipowicz once investigated one of Bobby’s childhood acquaintances during his days on the Robbery Squad during a storyline involving one of Bobby's old acquaintances coming back to cause him trouble today.

He needs a haircut.  Smits has half-a-mullet going on for most of his stint on the show.  I guess this was considered a fairly stylish coif for an early ‘90s TV star, but it doesn’t look like “cop hair” to me. 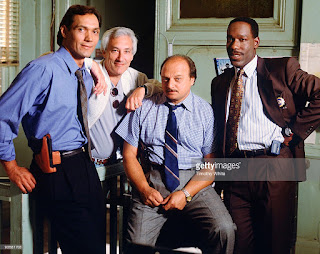 Jimmy Smits, by all accounts, was beloved by the cast and crew of the show.  Even though he only lasted for as long as his initial contract (eventually revealing that he left because Milch’s last minute scripts frustrated him as an actor), he did make a surprise cameo appearance during an early episode in the show’s final season.  He was also around months later for the series’ wrap party, and he hosted the farewell special (remember this was six years after he quit…) so clearly he enjoyed the people on the show.  He also appeared on a few series overseen by Blue alumni -- he was a season-long guest star on Dexter during Charles H. Eglee’s time as showrunner, in addition to his appearances on Sons of Anarchy, which had Paris Barclay as a producer.

Season Two Highlights
Detective John Kelly’s exit.  Everyone in America knew that Caruso was leaving the series due to behind-the-scenes conflicts (and that movie career), so providing his character with a noble exit that worked within the context of the existing storyline was no mean feat.  They could’ve gone the cheap route and have Kelly shot and killed while on a bust, maybe even create a story that parallels his own father’s murder, but they didn’t.  Heck, they could’ve just killed Caruso off in-between seasons and opened with his funeral this year, telling Caruso not to return at all, but they didn’t.  There’s no way this exit was going to be perfect, but for the most part, I think the writers did a credible job with the thankless task.

Some fans point to Season Two as the debut of the show’s formula -- two cases are worked, the suspects are caught, and the episode closes with some personal life scenes -- but I would argue the episodes have some variety to them.  We’re still seeing the detectives testify in court, an aspect of their jobs that’s forgotten in later years, and not every case begins at the opening of the episode.  There’s still a sense that these cops have been at this for years, and are dealing with some of the same scumbags they’ve always hated (such as the wifebeater who frustrates Sipowicz in the early episodes this season.)  A basic formula does come into existence, but it’s fairly broad.

The way the show contrasts the basic joys and heartbreaks in life still feels real.  One memorable scene has Lt. Fancy proudly showing off a photo of his new baby boy to Sipowicz, who earlier that day discovered the body of his friend, Dan Breen, murdered by his mentally handicapped son.  Fancy doesn’t want to be too happy around Sipowicz, and Sipowicz doesn’t want to insult Fancy by rejecting the photo, but it’s clear that the two really have nothing to say to one another in this moment.  Just allowing the scene to be uncomfortable, and not give either character the right thing to say, is a testament to both the writers and the actors.

You’re still seeing all kinds of cops.  The models playing detectives we’ll see in the later seasons haven’t really appeared yet, so when other detectives who aren’t regular cast members pop up in episodes, you get the sense that these are old vets just doing the job, having their own lives behind-the-scenes of the show.  The most notable episode featuring a cop who isn’t a featured player is “A Murder with Teeth in It,” which tells the story of Detective Jerry McCabe, someone who’s helped Sipowicz out in the past, who loses his dentures after an embarrassing incident with a prostitute and her pimp.  This spirals out of control, with McCabe killing the pimp, and later killing himself after the story goes public.  (And Simone feeling partially responsible, because he accidentally leaked the story.)  This kind of plot wouldn’t seem out of place in the pay-cable landscape of today’s “Peak TV,” but for network TV in this era, it was absolutely brutal.

The Greg/Donna breakup, which was likely created just to give the actors something to do, did have one touching moment that gives you some indication of Gail O’Grady’s acting talent.  While listing off the reasons why she’s unhappy with him, Donna tells Greg that he doesn’t go out because he’s ashamed of his stutter, and as her voice begins to break, adds that he won’t introduce her to his kids because, “you’re ashamed of me.”  O’Grady’s ability to give a rather goofy supporting cast member so much depth in just a brief scene speaks to just how good an actress she can be.  (It also indicates that there was a lot going on in Greg and Donna’s relationship that never made it on to the show.  On the one hand, I like the hints that these characters have fully formed lives that we’re only offered a glimpse of.  On the other, I’d rather see this untold story in the place of the Greg/Donna material that actually aired.)

Most of the cases this year lack the impact of the first seasons, but quite a few remain standouts.  One of my favorites (“The Bank Dick”) involves a timid young woman who’s been drawn into a case involving an abusive male relative.  When she helps the detectives on the case, Sipowicz pulls money out of his wallet and offers it to her, thinking she’ll use it to get out of town and start over somewhere else.  She looks at the money and asks, “What do I got to do for that?”  The hurt in Dennis Franz’s eyes when it dawns on Sipowicz the kind of life this woman’s known is profound.  Not only can Franz deliver a monologue tailor-made for an Emmy reel, but he can also provide these quiet moments that sell the reality of the show.

Re-watching these episodes, I was surprised by how touched I was during Sipowicz’s second proposal to Sylvia; the “real” one.  It comes after an uncomfortable dinner, where Sipowicz plans on easing Andy, Jr. into the idea of him and Sylvia living together, while Andy, Jr. has his own ulterior motives for the meal.  Andy, Jr. announces that he’s joined the Air Force, and after initially congratulating his son, Sipowicz grows silent.  Later, while washing dishes with Sylvia, Sipowicz despondently remarks “the time to be a father to them is when they’re little,” implying that he doesn’t know what kind of advice to give his son.  It seems that Sipowicz is only now realizing what the much angrier Andy, Jr. of the first season tried to tell him -- it’s not his place to tell Andy, Jr. anything.  Sipowicz was absent for most of his son’s childhood, and now that his son is an adult, offering Andy, Jr. any guidance in life makes him feel like a fraud.  Sylvia realizes how much this hurts Sipowicz and, knowing now that she’s essentially the only family he has left, says, “ask me again.”  Sipowicz eventually picks up on her meaning and proposes for a second time in their kitchen.

This is a classic example of Milch just rolling with the punches and producing great work out of what he’s been given -- the inspiration for Andy, Jr. joining the Air Force is his new buzzcut, which the actor had to get for his role on SeaQuest DSV.  It’s also an example of the producers not realizing that the audience was one day going to see the titles of the scripts on their television screens.  This moment, one of the show’s most touching, appears in the episode “In the Butt, Bob.”

Looking online, I've just learned that the actor who played Andy, Jr. is Michael DeLuise -- the son of Dom DeLuise, and one of the headbangers in Wayne's World's tribute to "Bohemian Rhapsody" (!)


The actual wedding between Andy Sipowicz and Sylvia Costas isn’t particularly memorable, but the lead-up to it has some great Sipowicz moments.  Andy’s paranoid in the days before the wedding that his side of the church is going to be empty, given the number of people he’s alienated during his years drinking.  This would embarrass anyone, but to Sipowicz it’s a testament to how many years he’s spent lost in the bottle.  Most important to him is seeing Andy, Jr. there, but he can’t make it due to his commitment to the Air Force (this does have a TV happy ending, though.)  Sipowicz’s inability to escape his past, and the shame he carries for his lost years, is an element of the show that sticks around until the end.

Next time: Season Two is wrapped up, highlighting some of the new writers this year, and a botched storyline or two.
Newer Post Older Post Home
Posted by G. Kendall at 6:30 PM