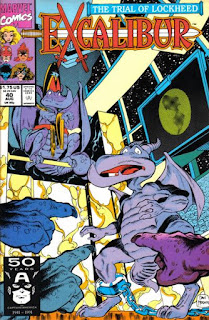 In a Nutshell
Lockheed is placed on trial by his people.

Plot
As doctors work to save Lockheed, injured in the battle with Doctor Doom, while Excalibur looks on, Lockheed's astral form is called to his people, who are putting him on trial for betraying their communal nature by living alone on Earth. In the course of the trial, Lockheed's explains his friendship with Kitty and his role as a member of Excalibur, telling the court of their adventures (some of which cause the court to fall asleep), arguing that he has found a new community with Excalibur. Lockheed is ultimately acquitted and allowed to return to his body, but his physical well-being is still touch-and-go. Just then, a helicopter lands on the roof of the hospital, alarming Rachel because the inhabitants are shielded from her psychic probes. Excalibur races to the roof, just in time to see the X-Men emerge.

Firsts and Other Notables
This issue establishes that Lockheed's people speak Dragonspeak, a language which, when translated into English, sounds like Dr. Seuss writing Shakespeare. His people are also referred to collectively as "the Flock", and value communal living above all else, though I have no idea how seriously we're meant to take any of these "revelations" and how much of this stuff actually sticks or gets referenced in future stories. 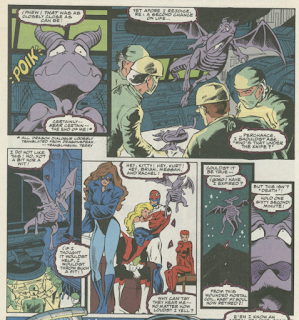 Lockheed refers to Excalibur as believing the X-Men died, which seems an odd choice of words; it's appropriate for readers to use, as we know the X-Men didn't die, but Lockheed at this point should be as in the dark as the rest of Excalibur regarding the survival of the X-Men (since, as far as we've been shown on page, they haven't been told or learned the X-Men are alive until the end of this issue).

In easily my favorite thing about this issue, Lockheed recounts the "Cross-Time Caper" and Excalibur's seemingly-constant run-ins with alternate reality Nazis, which prompts the tribunal to fall asleep. Some thinly veiled criticism from Lobdell, sure, but, well, it's funny cuz it's true. 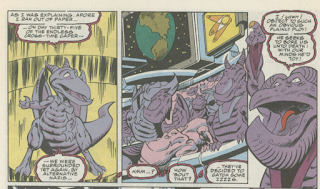 Next issue will reveal that the X-Men (and Marvel Girl) who appear on the last page of this issue are actually the Warwolves in disguise. More on that then. 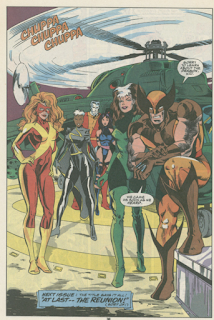 Creator Central
Dave Hoover draws this issue and the next; I primarily associate him with drawing the end of Mark Gruenwald's Captain America run, but he did a handful of different things at Marvel and DC in the early to mid 90s without ever really settling in as a recurring presence.

A Work in Progress
It's noted that Lockheed's innate empathy, which contributes to his species' ability to live communally, has enabled him to communicate with Excalibur despite not speaking their language. 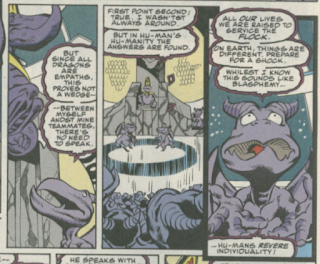 Young Love
Nightcrawler's feelings for Meggan are apparent to even Lockheed, and he expresses them perhaps a bit more seriously than we've been led to believe they are. 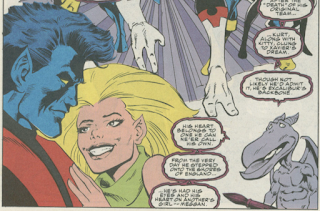 Teebore's Take
I've kind of been dreading this somewhat infamous Lockheed issue, but you know what, despite myself, I kinda liked it. The twee "Seuss by way of Shakespeare" dialogue gets way too precious, way too fast, but while I wasn't exactly clamoring for more info about Lockheed, he's certainly a relatively unexplored character in the book. And the tone of this story certainly fits the more whimsical, tongue-in-cheek approach that characterized the earlier Claremont/Davis issues of the series.The one page splashes, detailing Lockheed's thoughts on his teammates, would be better in the hands of a more dynamic artist (though in general, the art here isn't bad; definitely better than the previous three issues), but all together, this issue reads like a not-bad primer on the series and its characters heading into the upcoming Alan Davis renaissance (it also doesn't hurt that the issue sets up a resolution to the longstanding Excalibur/X-Men fissure - sort of, at least, as we'll see). Ultimately inconsequential, but also inoffensive. And even a little bit fun.