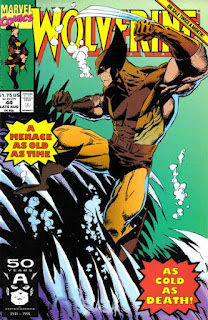 Plot
In Central Park, Wolverine thinks back to the time he was compelled to board a cruise ship by dreams of an infant being attacked by a monstrous creature. Aboard the ship, he befriends a trio of pregnant women, Gretchen, Rachel and Brenda. Rachel goes for a swim but is attacked in the pool by an invisible creature. Wolverine manages to fight it off, but not before Rachel and her child die. Realizing the pregnant women are being targeted, Wolverine urges them to stay locked in their cabin, while he hunts down the creature responsible. However, Brenda is killed by the creature in the elevator, but before it can kill Gretchen, Wolverine manages to knock it overboard and into the ship's propellers. Later, Wolverine visits Gretchen, telling her he has a feeling her baby is destined for big things; Gretchen agrees.

Firsts and Other Notables
A fill-in/inventory story, the upcoming X-Factor creative team of Peter David and Larry Stroman writes and draws this. David, of course, penned the similar fill-in issues #9 and #25, as well as "The Gehenna Stone Affair" in issues #11-16.

Stroman is an artist whose work seems very divisive; you either love it, or hate it. His current stuff isn't quite the same, but his work from this era, particularly on X-Factor, I rather enjoy. It's quirky and at times goofy, definitely not realistic (his sense of anatomy is Sienkiewiczian, but where Sienkiewicz's figures were built around vertical lines, Stroman's are built around circles), but I like it.

Hama & Silvestri contribute the opening page, which finds Wolverine in Central Park, the water in the pond comically triggering his memory of that time he fought a weird invisible demon at the urging of a psychic fetus while on a cruise ship. 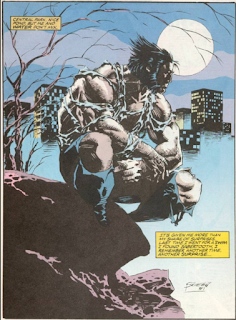 Artistic Achievements
Either Larry Stroman doesn't realize how shallow even the deepest recreational pools are, or I've been swimming in the wrong pools. 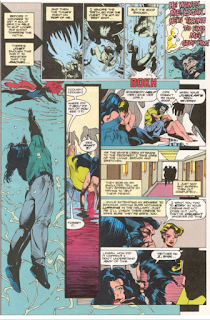 Teebore's Take
Unlike the previous issue, which only felt partially like a fill-in story, this is 100% a fill-in issue. And, aside from the most hilarious setup for a completely unrelated fill-in story ever ("look at that pond...ponds are water...cruise ships float on water...here's a story about a time I was on a cruise ship!"; I mean, we're taking "It happened at sea. See? "C "for Catwoman!" level territory here), it's not terribly notable or all that memorable. Aside from the general inconsequentialness of it, the story also suffers from the huge coincidence that the last pregnant woman targeted also, of course, happens to be the one carrying the creepy psychic fetus reaching out to Wolverine. The Stroman art is better than most fill-in/inventory stories get, but this is otherwise entirely superfluous and forgettable.