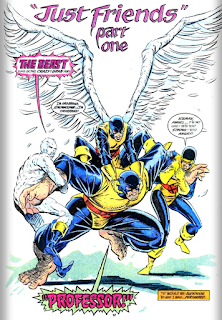 "Professor / Drawing Stares / If This Is Tuesday, It Must Be Belgium / Fool For Love / My Pal Mugsy / Beast, I'm Going to Kill You / Bring Me the Head of the Beast / Closure"
September - December 1991

Plot
Issue #85: Dodging Ship's efforts to record his memoirs, Beast spots X-Factor's mail carrier being attacked by an armored figure. Beast fights him off, in the process learning the attacker has a beast-like face. Included in the rescued mail is an invitation to a mutant symposium in Belgium, which the armored attacker was meant to intercept. Issue #86: En route to Belgium, Beast tells his seatmate about his high school relationship with Jennifer Nyles, which ended when Professor X wiped her mind to protect Beast's identity. Arriving at the conference, Beast is excited to see that Jennifer will be a keynote speaker, just as he's attacked by the Constrictor. Issue #87: During the fight, Beast spots the aging Red Ghost, and after Beast defeats Constrictor, the Red Ghost's presence is explained when his Super Apes attack the conference and kidnap Jennifer. 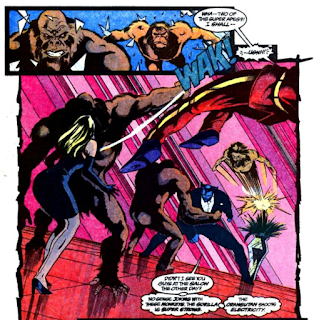 Issue #88: Tracking her to the Belgian Ministry of Defense, Beast learns that the Belgian Commander Courage orchestrated the kidnapping and Beast's presence, in order to exploit his connection to the Avengers. Issue #89: This prompts Beast to seek out the Constrictor's help, and together they attack Courage and his cybernetic Were-Borgs. Beast reaches Jennifer, but she pulls out a gun and shoots him. Issue #90: Held captive, Beast goads Courage into revealing his plan, to use techno-organic technology developed by Jennifer to create an army of Were-Borgs, after which, Beast escapes from his cage, grabs Jennifer, and flees. Issue #91: Hacking into Courage's computer, Beast reprograms the Super Apes, as Jennifer explains that her research was fueled by her feeling that something from her childhood was missing. 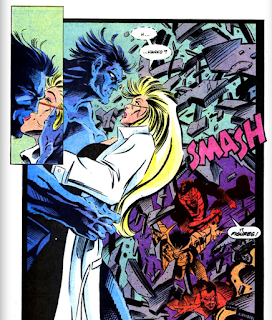 After Beast kisses her, her lost memories of their time together return. Just then, the Constrictor bursts in, on the run from Courage and his Were-Borgs. Issue #92: As Jennifer realizes it was her loss of memories pertaining to Beast which led her to be manipulated by Courage and subconsciously invite Beast to the seminar, Courage shoots her. As Beast cradles her dying body, Constrictor and the Super Apes, now back under Red Ghost's control, destroy Courage, and Beast realizes he can use Jennifer's research to save her life. Weeks later, Beast bids farewell to a fully-recovered Jennifer, the pair deciding to just remain friends.

Firsts and Other Notables
This story was mentioned by Rob Liefeld as one of his upcoming projects in an early Marvel Age interview, though Liefeld ends up drawing only the first two chapters. Given the timing of the interview (which was closer to the beginning of Liefeld's tenure on New Mutants), this story was either solicited well before it's eventual publication, or Liefeld finished his work and then Marvel sat on the story for awhile (as its published around the same time X-Force is launched).

Taking place in part before and shortly after Beast joined the X-Men, this story gives us a rare look at Liefeld drawing the original X-Men, and it expands on Beast's origin as presented in the backup stories of X-Men #49-53 by introducing Jennifer Nyles, Beast's high school friend/crush, who, along with everyone else in his town, had her mindwiped by Professor X to protect Beast's identity. The Marvel Chronology Project retroactively declares her to have been present in the backup story of X-Men #50 (though of course she isn't named as such in that story), and she'll make one additional appearance outside of this story, in X-Men Unlimited #10.

As of issue #87, Jae Lee takes over as the artist of the story (he penciled a few pages of #86 as well), his first work for Marvel. He will shortly thereafter take over from John Byrne on Namor, his first regular gig, and work on a handful of projects for the X-office down the road (including X-Factor's three issue contribution to "X-Cutioner's Song").

In between issues #88 and #89 Commander Courage lets Beast go, only to have Beast return to the Ministry of Defense with the Constrictor immediately thereafter; it's unclear why Courage let him go.

Issue #89 includes a Mojo story featuring early art from future Uncanny X-Men penciller Joe Madureira, his first published work for Marvel, while issue #92 includes a Northstar story drawn by Madureira, which is the first story he drew for Marvel (the Mojo story was drawn second, but published first). He was 16 at the time.

Issue #90 is the debut of Marvel Comics Presents new "flip book" layout, in which each issue features both a fully-illustrated cover (including logo, issue number, etc.) on the "front' and "back" of each issue, with the four stories divided into two (so you'd read the story featured on one cover as well as another story, then flip the book to read the other two stories). Not that I've ever been an avid collector of Marvel Comics Presents, but this kind of thing always bugs me, cuz I have no idea which cover is the "real" one and thus which one should be featured and which should be covered up when bagging, boarding and boxing the issue.

The Wolverine story by Peter David and Sam Keith which introduces Cyber runs alongside the Beast story in these issues; we'll look at that a bit later down the line, as well as the Ghost Rider/Cable story which begins in issue #90.

The Chronology Corner
The Marvel Chronology Project places the "present day" portion of this story between issues #59-#60 of X-Factor, just prior to the beginning of "X-Tinction Agenda". That, however, doesn't really work, since in issue #85, Ship is depicted as hovering above the ocean when it was acting like a skyscraper at that time. Instead, this probably takes either between X-Factor #40 and #41, or between #42 and #43 (before Ship flies everyone off-world for "Judgment War").

A Work in Progress
Apparently, when Ship was principally located hovering offshore, the post office had to send someone out via raft to deliver X-Factor's mail.

Issue #86 retcons Beast's Silver Age origin, revealing that Jennifer strong-armed the coach into giving Hank a chance to show his football skills, leading to him becoming a star athlete (as seen in the original backups). 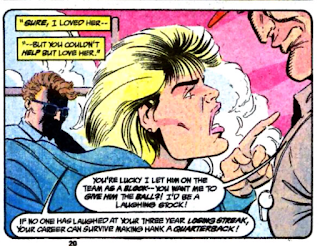 "Professor Xavier is a jerk!"
The early chapters of this story remind readers of Professor Xavier's Silver Age predilection for mind-wiping everyone in sight, revealing that Beast had a particularly hard time dealing with the erasure of Jennifer's memory after Xavier wiped out everyone in Beast's town. 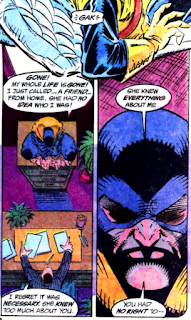 Teebore's Take
As Rob Liefeld-drawn Marvel Comics Presents stories go, this is a lot better than it has any right to be. Of course, it helps that Liefeld only draws 2/8 of the story (and barely, at that), leaving the rest to a young Jae Lee (who isn't perfect, but is able to easily clear the relatively low bar of "better than Liefeld). It also helps that Lobdell (who cut his teeth doing one-off stories in Marvel Comics Presents) has a decent handle on the eight page story, helping the pacing of this one (which doesn't suffer as much from the too fast/too slow whiplash of so many MCP stories), in spite of some muddied cliffhanger moments.

Plus, with the various X-Men characters already withdrawing into an insular world more and more cutoff from the Marvel Universe as a whole, it's fun to see Beast fighting, then teaming up with, a classic Marvel "stooge level" villain in the Constrictor, along with classic Silver Age baddie Red Ghost and his Super Apes, while playing with the fact that Professor X didn't meet a mind he wouldn't wipe back in the Silver Age also gives the story not only a character arc of sorts for Beast (as he comes to terms with Xavier's actions and his feelings for Jennifer) but also connects the story to the large X-narrative, helping it read as less disconnected and superfluous than the usual Marvel Comics Presents fare. All in all, this is probably the least inessential and ho-hum MCP story ("Weapon X" aside) in a long while, which is rather surprising given its initial impetus as a Rob Liefeld project.

Next Issue
Tomorrow, a look back at the first 70 issues of X-Factor. Next week, Excalibur #42 and Wolverine #45.
Newer Post Older Post Home
Posted by Austin Gorton at 12:00 PM