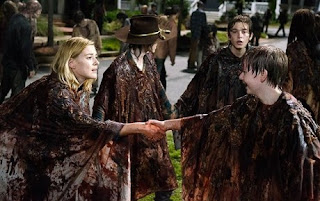 People need dramatic examples to shake them out of apathy and Rick can't do that as Rick Grimes. As a man, he's flesh and blood, he can be ignored, he can be destroyed; but as a symbol...as a symbol he can be incorruptible, he can be everlasting!

What symbol are we talking about? No...Not Batman. But that would be awesome! Nah, the symbol is...well...of someone who decides to walk and start maniacally whacking zombies.

OK, that's kind of an odd symbol, maybe Batman Begins wasn't the best reference to use. But the point is Batman inspired a city to be better and now so has Rick Grimes.

All it took for Rick Grimes to become a symbol was his son losing an eye. Once Carl's fate was in jeopardy Rick took matters into his own hands and started offing as many zombies roaming the streets of Alexandria as possible. The citizens took notice and soon everyone banded together to fight the undead. Add in the arrival of Daryl, Abraham and Sasha (and Abraham's rocket launcher) and soon enough the city was saved! It was actually a pretty uplifting moment.

Or have they? I suppose we have to ask the question, who has been redeemed? So far, the Alexandrians seemed to only exist to be killed off. Most of them whose name we learned have been offed. This was even prevalent in this episode when three of the dwindling number of Alexandrians we know enough about to even form opinions on were killed.

So you could say “the citizens” of Alexandria redeemed themselves but I ask you, which individual Alexandrian have you changed your mind about? In the end, I'm left not feeling like anybody redeemed themselves or proved their mettle but instead that Rick and company, once again, defeated a zombie horde. Only this time a few other extras were involved.

Other Thoughts:
We started the episode with Daryl, Abraham and Sasha being held up by a bunch bikers claiming (not that kind of claiming) allegiance to a “Negan.” At first I thought that the head biker was being coy and really was Negan himself...but then he blew up.

Daryl with a rocket launcher is one of the greatest things ever. I know it was fan service, but still!

I was surprised the rocket launcher got used so early in this season. I was expecting the show to wait until the season finale to break out that bad boy.

Abraham's “Who's Negan?” is very reminiscent of when he asked, “Who's Deanna?” Intentional?

Don't trust what you saw with Abraham and Sasha. If you're close enough to a blast to get knocked over by it you're probably not walking away unscathed.

There was an awful lot of jibber jabber between Rick and his incognito bunch. I'm surprised no zombies took notice.

Why would taking Judith to the church be safer than the vehicles?

I think it's safe to say that the vibe between Denise and that Wolf can be labeled as “creepy”.

How far is it to the vehicles? Day turned to night and they're still walking!

I would love it if it got back to Carol that by traumatizing Sam she set off a chain reaction resulting in Sam's, Jessie's and Ron's death as well as Carl losing an eye but you know it won't. Heck, even if it did she probably wouldn't care.

The scene in which Sam, Jessie and Ron died had an odd dream-like quality.

When Denise was walking with the Wolf I wanted her to push him into a zombie. He ended up getting bit while saving her and now I wonder if that was intentional?

Carol's blood lust was satiated. She got to kill the Wolf...even though I think he was probably soon dead anyway.

Morgan, when you're in the heat of a zombie battle you probably shouldn't take time to apologize to one of the zombies.

At first I thought Father Gabriel was going to renounce God but, instead, deciding that God works through humans so they must be the ones to do something better fits his character.

There must have been a better way to light the gasoline on fire. Seems like a waste of a rocket.

In the end, I am excited about the prospect of Rick and company rebuilding Alexandra and attempting to build some sort of society. We'll just see how long that attempt lasts.
Newer Post Older Post Home
Posted by Dr. Bitz at 2:35 AM