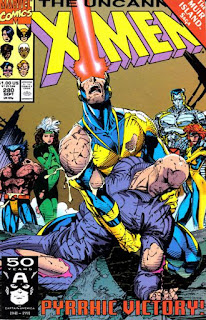 In a Nutshell
The X-Men defeat the Shadow King, but at the cost of Xavier's legs.

Plot
Xavier and a team of SHIELD agents penetrate the rubble of Muir Island to discover the Shadow King-controlled Legion holding a faction of X-Men captive. He quickly dispatches the SHIELD agents, then prepares to kill Xavier, but is stopped by Storm, who damages Legion enough to send him running, releasing the captive X-Men. Buying himself some time, Legion dispatches the X-Men still under his control to battle the rest, while Xavier prepares to enter the astral plane, with a contingent of X-Men protecting his body while the rest attempt to disrupt the nexus empowering the villain. On the astral plane, Xavier and the Shadow King fight, and the Shadow King shatters Xavier's legs, crippling him again. 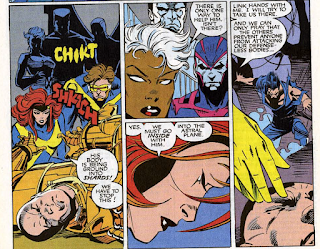 This prompts Jean to bring the rest of the X-Men guarding his body onto the astral plane to help him, leaving his physical body unprotected as Legion approaches. In the real world. Forge manages to free Psylocke from the Shadow King's control, then uses her psychic knife on Polaris, thus disrupting the Shadow King's connection to the physical world, destroying him and leaving Legion an empty shell. In the aftermath, Xavier declares that the enthralled X-Men will be scarred in spirit yet ultimately fine, but that the Shadow King left him a parting gift: if Xavier ever achieves his dream, he will need his X-Men to walk him there.

Firsts and Other Notables
Professor X loses the ability to walk this issue, his spine shattered by the Shadow King during their psychic battle (via the old "whatever harm I inflict on the astral plane manifests physically as well" routine). This ends the long stretch of issues (from roughly the mid-170s) in which Xavier could walk, part of the overall deck-clearing and setup the "The Muir Island Saga" does in anticipation of the linewide relaunch next issue, which features a more traditional status quo for the X-Men (which means wheelchair-bound Xavier). 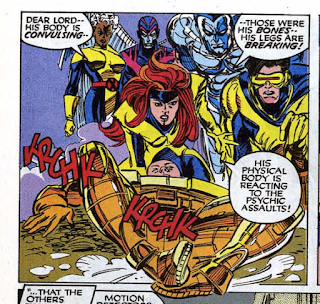 Of course, Xavier is so powerful that he needs something preventing him from simply going out into the field with the X-Men and telepathically solving all their problems, which is one of the reasons Claremont sent him off into space not long after restoring his ability to walk, so there's functional reason to put Xavier back in a wheelchair at play here besides just "cuz Bob Harras likes it better that way". Also, keep in mind, this is the second body Xavier has broken, since this is still the clone body created for him by Sikorsky following his transformation into a Brood in issue #167. Though being crippled by the Shadow King sounds a lot better (and is more thematically resonant) than being crippled by Lucifer, for sure (of course, there's also the fact that, as of issue #278, the Morlock Healer is still on hand, specifically to patch up injuries, but hey, look over there!).

The Shadow King is defeated and, seemingly, killed this issue, after Psylocke's psychic knife disrupts his connection to Lorna. He actually stays dead for a relatively long time, and won't return until the late 90s. In the process, Legion is incapacitated as well (the epilogue in X-Factor #70 will establish that he's in a coma), effectively clearing him from the deck as the series preps for a more traditional status quo starting next issue. 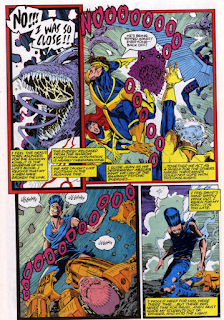 Upon the defeat of the Shadow King, Moira, at long last, returns to her normal self. 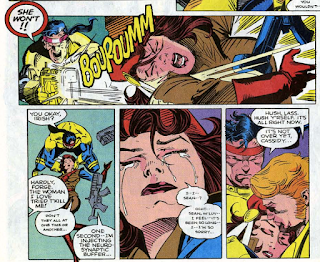 It's also noted that Polaris has shrunk in size (recall that she was physically larger following her encounter with Zaladane in issue #250, a result of new powers at work); that will be followed up on in X-Factor #70.

It's suggested in this issue that the Shadow King's defeat also destroys the astral plane, but well, that's just not the case, and I think the idea is mostly ignored by pretty much everyone moving forward.

Creator Central
Andy Kubert, carrying over from the previous issue, draws this issue, along with Steven Butler. From the looks of it, their page assignments are random (there's no front half/back half split). Somewhat interestingly, Kubert draws this issue, which writes out Legion for a long period of time; a few years later, as the regular penciller of X-Men, he'll also draw the final issue of "Legion Quest", which kicks of "Age of Apocalypse" and also writes out Legion (for an even longer period of time), maybe Kubert sort of the unofficial go-to artist for getting rid of Legion.

Jim Lee provides the cover for this issue; not sure if he was going for a "Pieta" homage, but it's close.

A Work in Progress
As with the previous issue, the narrative captions are written from Xavier's perspective.

It's established that Legion's blast in X-Factor #69 destroyed most of the surface level facilities of Moira's research facility; the subbasement levels are still inact, and while the island suffered major damage, it won't be long before we see it again, and I don't believe any mention of rebuilding the facility is ever made.

Soviet Colonel Vazhin (spelled "Vashin") is still aboard the sub, along with Mystique. As will be the case again in the first Avengers film, he prepares to call in a nuclear strike on Muir Island should Professor X fail to defeat the Shadow King. 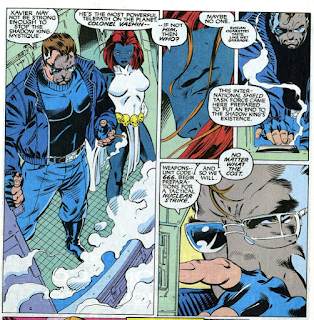 Rogue's costume is now just, essentially, a tattered green bikini, though at least in this case, it's arguably just her damaged costume from the previous issue.

Moira, however, has completely changed outfits between chapters, returning to her pseudo-Highland garb from issue #278 after wearing a more typical Moira jumpsuit in X-Factor #69. 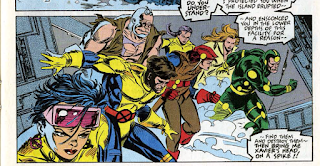 The psychic armor Xavier dons on the astral plane to battle Shadow King matches what he wore during their first encounter in X-Men #117. 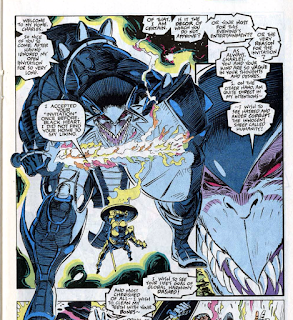 Beast mocks Guido's name; Guido getting his name mocked (albeit his codename) will become a recurring bit in X-Factor. 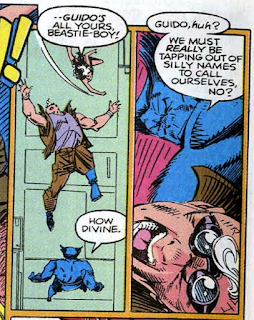 Shadow King declares the group of X-Men who enter the astral plane to be his most cherished students, though that could just be hyperbole (I can buy Cyclops, Jean, Storm and Colossus, but I'd think he'd prefer Beast to Angel, given the choice, and most likely, Nightcrawler and/or Kitty would be included in any group of "most cherished" students).

Forge's synaptic scrambler, which frees people from the Shadow King's control, is once again depicted a both an injectable substance, and a blast from a gun in the span of two pages.

The Best There is at What He Does
Gambit declares that Wolverine is not himself, still hurting inside, probably the last time the "Wolverine has lost a step" subplot is referenced, even obliquely (especially considered we've been seeing him heal up faster than ever in his solo series for months now).

The Best There is at What He Does, Mon Ami
Gambit is incorrectly called "Creole" this issue by Wolverine (he's Cajun).

For Sale
More trading cards, this time for Star Trek (spanning both Original Series and Next Generation). 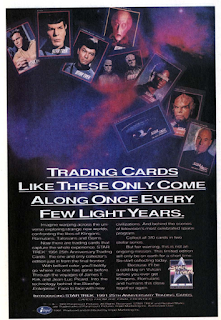 It's in the Mail
A letter writer in this issue complains that Wolverine is overexposed (he's not wrong, but it's only going to get worse), compares Jubilee to Wesley Crusher (that's not quite apt), and argues that Gambit is too perfect (making him possibly the first reader to realize that particular truth).

Teebore's Take
Like the "Muir Island Saga" as a whole, this issue gains from the circumstances of its publication moreso than from the story it's telling, which is, once again, mostly a mess. Having two pencilers trading off pages doesn't help (even if they mostly mesh well), but the sloppy issue-to-issue plotting continues unabated: Colossus is suddenly on Muir Island, despite disappearing halfway through X-Factor #69, Moira has traded costumes in the midst of an explosion, and the key to defeating the Shadow King turns out to be psychic knifeing Lorna (which, as presented in this issue itself, should have, at best, simply weakened him, not outright destroyed him, and also sets up an odd dichotomy in which Psylocke is weak enough to become his thrall, but also strong enough to singlehandedly defeat him).

But despite all that, this issue still feels like a big deal. Chris Claremont technically left halfway through last issue, but this still feels like the true end of his era of the book, the final issue of the series before the big relaunch which, amongst other things, really ushers in what we think of when we think of "90s X-Men comics". To that end, this issue is filled with the feeling of being conclusive: the Shadow King, a threat on various levels for almost thirty issues now, is defeated (rather perfunctorily and undramatically, given the build-up and what we now know to have been Claremont's long-term plans for the villain, but still, it's an ending), Professor X is re-crippled (the better to fit the "classic" image of the series), his son, like Cyclops' an uncomfortable reminder of a non-classic status quo, ushered out of the franchise (also like Cyclops' son), Polaris is returned to normal (the better for her role in the new X-Factor) and we're left with a combined group of X-Men (including the originals and the Muir Islanders) too big for one book.

It's not the best ending possible, for either the Shadow King storyline or Claremont's tenure as a whole, or even necessarily a good ending, but it is an ending, all too rare in serial comic book stories, and it gains something from that. There's an "end of an era" feeling to this, a last look at these particular characters looking and arrayed this way, a feeling which transcends the inconsistent art, sloppy narrative, and ho-hum conclusion that defines the storyline as a whole.

Next Issue
Tomorrow, a new Weapon X debuts in X-Force #2. Friday, the "Muir Island Saga" gets an epilogue in X-Factor #70. Next week, Wolverine: Bloody Choices.