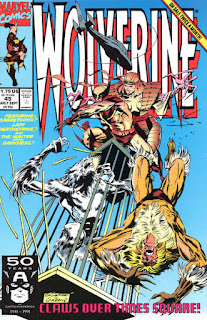 In a Nutshell
Wolverine is attacked by Sabretooth and Lady Deathstrike while trying to rescue the Hunter in Darkness.

Plot
Jubilee tells Wolverine about entrepreneur Ronald Parvenue's plan to display the captured Hunter in Darkness in Times Square, while a mysterious sniper sets up near the stage, preparing to shoot the Hunter. In the Morlock Tunnels, Albert sets off in search of more power to repair Elsie-Dee, much to the consternation of Masque and the Morlocks. Near the Brooklyn Bridge, Sabretooth climbs out of the river, stopping a mugger than mugging the target himself. Wolverine reaches Times Square just as Parvenue, attended by Lady Deathstrike, arrives on the scene, followed by Sabretooth. As the caged Hunter in Darkness is unveiled, Deathstrike is confidant his plight will draw out Wolverine, who does indeed intervene after the Hunter is shot and wounded by the sniper. Both Deathstrike and Sabretooth then leap into the fray, each attacking Wolverine, and their battle frees the Hunter, just as Albert's efforts trigger a city-wide blackout.

Firsts and Other Notables
The Hunter in Darkness, last seen in issue #34, appears in this issue (its appearance having been teased in issue #43), having been captured and put on display in the city, something which rankles Wolverine, prompting him to attempt to free the creature. 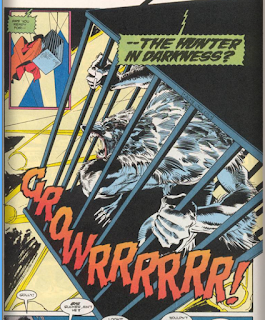 The Hunter is targeted by a mysterious female sniper; next issue reveals she is the daughter of Dooley, the RCMP from the Hunter's first appearance.

Ronald Parvenue, a Trump-like entrepreneur whom Lady Deathstrike sought out last issue, appears for the first time, and is responsible for the King Kong-like showing of the Hunter in Darkness. He appears in the next issue, and a handful more down the road. 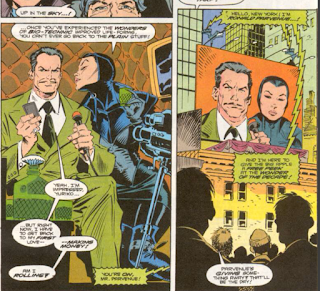 Wolverine gets into a three way battle with Sabretooth and Lady Deathstrike in this issue, marking the first time those two villains, arguably Wolverine's biggest adversaries at this point, have crossed paths on-page.

This issue contains a double-page pinup of Wolverine by Art Thibert.

The Chronology Corner
Wolverine appears in this following a bunch of guest appearances that occur between last issue and this one, including his appearances in "Infinity Gauntlet", the second story arc of Todd McFarlane's Spider-Man series, and issues #21-25 of John Byrne's Namor (as well as Bloody Choices).

A Work in Progress
In close proximity to Lady Deathstrike, Sabretooth once again calls out her scent, though it remains unclear if he's simply smelling those scents, or associating them with her specifically. 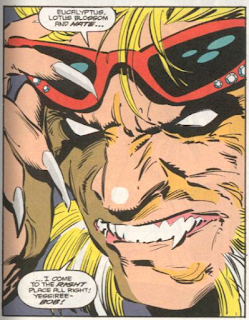 The Reference Section
A spectator tells Jubilee her outfit looks familiar, then asks "aren't you supposed to be dead?", a reference first to the similarity (in terms of color palette) between Jubilee's costume and Robin's, and then to the infamous "Death in the Family" Batman story, in which the second Robin was killed after readers voted for his death via 900-number. 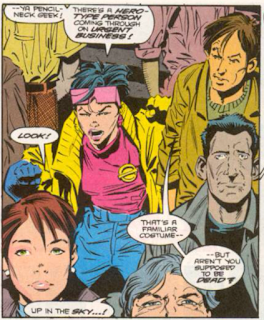 Spectators compare the battle and blackout to a Disneyworld stunt show, a nice change of pace from the usual "they must be shooting a movie nearby!" rationalization. 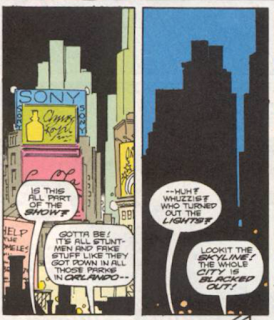 Teebore's Take
While technically some time has apparently passed for Wolverine between the one-page framing sequence of the previous issue and this one (enough so that chronologists are comfortable dropping a bunch of other stories between the two), this issue reads like a direct continuation of the previous story in issues #41-43, which, in turn, continued fairly directly from issue #38-40. While the earliest stories of the Hama/Silvestri pairing were fairly self-contained and formally structured (two three parters, with the solo issue #34 that introduced the Hunter between them), since #38, then, the pair has essentially been telling one long narrative, with various plots rising and falling into prominence along the way (Albert and Elsie-Dee were the main antagonists of issues #38-40; now they're in the realm of subplot while Sabretooth and Lady Deathstrike get top billing). The end result has the series reading much more like a classic, almost-Claremontian, serial narrative, something it's never really managed to do before (outside of the earliest issues of the series, which came the closest).

All of which is just a really long-winded way of saying "this issue is mainly just about Wolverine fighting Sabretooth and Lady Deathstrike while trying to free the Hunter in Darkness, and that's all just fine."