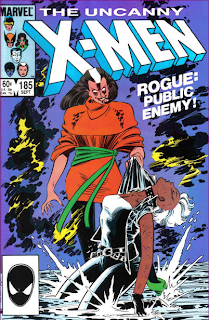 In a Nutshell
Storm loses her powers via Forge's Neutralizer.

Plot
At the Pentagon, Henry Peter Gyrich leads a briefing on Rogue and unveils Forge's Neutralizer, declaring his intent to use it in apprehending Rogue for killing a SHIELD agent. Raven Darkholme storms in, angry that Gyrich intends to use the untested Neutralizer prototype, but is told that the president has authorized the action. Meanwhile, at Xavier's School, Storm interrupts a therapy session between Professor X and Rachel to declare that Rogue has gone missing. Worried she may be suffering a relapse in the control of her powers, Professor X and Storm go to Cerebro to attempt to locate her, while Rachel, spying Xavier's address book, calls her father, Cyclops. Meanwhile, within a secret chamber at the Pentagon, Raven, as Mystique, consults Destiny for the best course of action regarding Rogue. Raven then informs Forge that Gyrich and his NSA team intend to use his invention on Rogue. Furious, Forge calls the president as he flies off to intercept Gyrich.

Storm tracks Rogue to a riverbank in Mississippi, a place Rogue used to come as a child, insisting that she has friends now and doesn't need to isolate herself. As a show of trust, Storm willing allows Rogue to absorb her powers and memories. With Storm unconscious, Rogue revels in the new-found perspective gained from Storm's abilities. Just then, Gyrich and his agents arrive and attack Rogue. She whips up a storm that scatters the government agents, but endangers a river trawler in the process. Just as she loses control of the storm, Storm awakens and quells the tempest. They work together to save the crew of the ship, leaving themselves open to another attack. Forge arrives just as Gyrich fires off a full power shot from the Neutralizer. Storm knocks Rogue out of the way, taking the blast herself. In the ensuing discharge of energy, Rogue disappears, presumably taken away by the current. Forge fishes the unconscious and powerless Storm out of the river, angrily admonishing Gyrich for taking the law into his own hands. Meanwhile, a group of Dire Wraiths watch the scene from their scrying pool, and, recognizing Forge's Neutralizer as being similar in design to the one used against them by their foe Rom, declare that Forge must die.

Firsts and Other Notables
Storm loses her powers as of this issue, taking a full powered shot from Forge's Neutralizer intended for Rogue (depicted via a pretty awesome panel). While the immediate ramifications of this event will be addressed over the course of the next few issues, being powerless will remain Storm's status quo for roughly the next forty odd issues. 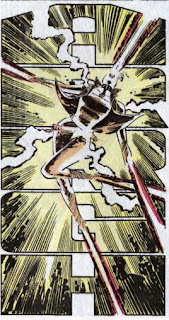 Though relative common place by the time Jim Lee gets his hands on her, this issue marks the first time we see "sexy Rogue", as, in the culmination of the gradual visual de-aging of the character, she spends most of this issue hanging around in a bikini (much to the delight of Teenage Teebore). 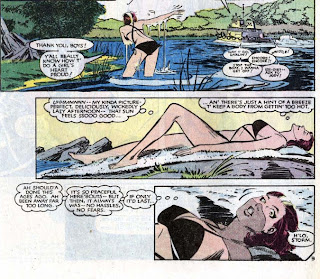 We also learn that Rogue is originally from Mississippi, and hear for the first time the now-familiar story about how her power first manifested when she kissed a boy named Cody, further strengthening the idea of her powers as a burden. 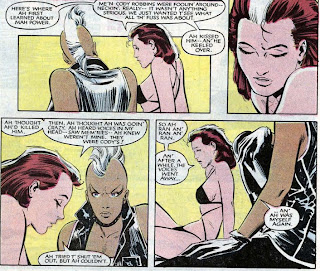 We learn that Rachel is the daughter of Cyclops (and by extension that her last name is Summers, though that's not made explicit). She hears Madelyne's voice and refers to her as "mom", though, as New Mutants #18 established that Rachel's mother helped train her in the use of her telekinetic powers, at this point it stands to reason that Rachel is merely confusing Madelyne's voice with Jean Grey's (this will be made explicit eventually).

Destiny saws that she's unable to currently see the future due to a rend in the fabric of space/time. It's never made clear whether this is a reference to the events hinted at by Naze to Forge last issue, a result of the Demon Bear story unfolding concurrently in New Mutants, or the arrival of Rachel in the present day. 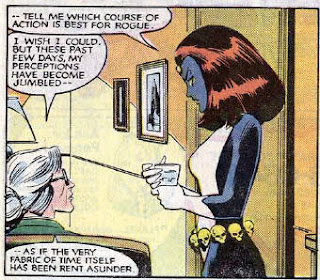 Storm mentions that she found Rogue and was told about the Neutralizer thanks to Mystique, and a footnote points the reader to a future issue of Marvel Fanfare. That story did eventually see print, some four years later, as a backup story, written by Claremont, in Marvel Fanfare #40. In it, Mystique approaches Storm and informs her of the situation, though she fails to mention that Destiny has foreseen that whomever goes to Rogue's aid will be depowered, making Mystique's action less altruistic. It's also notable for ending with Mystique, as a male Raven Darkholme, dancing with Destiny, perhaps the most overt on-panel hint at Claremont's true intentions for their relationship.

Though Cyclops' head curiously remains present, Storm's head has been removed from the corner box in this issue, perhaps a nod to her depowerment (though she technically remains with the team).

A Work in Progress
Several little details regarding the nature of Rogue's power are established in this issue. It's said that length of contact correlates to how long she hangs onto stolen powers and memories (meaning she must have touched Ms. Marvel longer than anyone else, and suggesting she could potentially permanently steal someone else's powers and memories). Rogue also believes that because Storm didn't fight against Rogue taking her powers, Rogue was able to more easily handle sharing Storm's emotions and memories with her own, while it's also confirmed that Rogue adopts the diction and voice of the persona she's absorbed.

It's also mentioned that while Rogue ostensibly came to Xavier for help in controlling her powers, she's actually gotten worse since joining the team, a nod to the events of issue #182.

Gyrich's briefing which opens the issue allows Romita and Green to recreate scenes from issue #158, in which Rogue is drawn noticeably younger than she appeared in that issue. 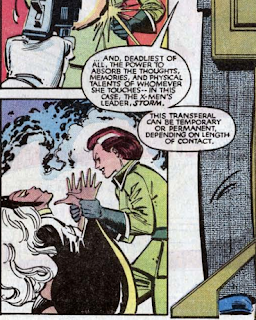 Gyrich also saws that the computer virus the X-Men introduced to the Pentagon in issue #158 erased references not only to the X-Men but mutants in general, though clearly the government has since learned about the presence of the virus and it's effects. 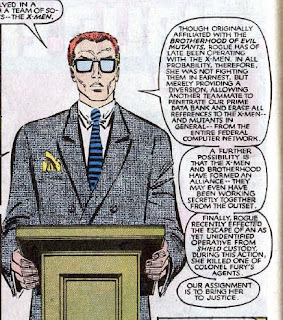 When told Rogue is missing, Professor X notes that he can't sense her thoughts, meaning she's gone outside the greater New York area, giving a range to Xavier's telepathy when unassisted by Cerebro (he's also wearing some kind of weird robe/smoking jacket in his scenes). 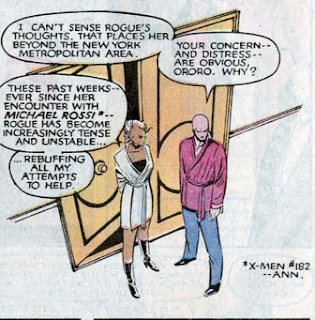 Storm notes that Rossi is away on another mission since being rescued by Rogue, offering a bit of closure to his last appearance, though it's never made clear what that mission is, and he has yet to appear in an X-book since.

It's revealed that the headquarters of Mystique's Brotherhood of Evil Mutants, first seen in issue #141, is actually a room hidden within the Pentagon (which also explains what Rogue and Mystique were doing there in issue #158). While Mystique is a shapechanger and well known at the Pentagon as Raven Darkholme, it's unclear how the other Brotherhood members, such as the not-inconspicuous Blob, come and go. 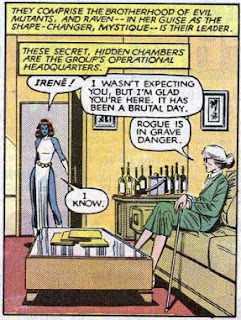 Mystique notes that Gyrich wants to use the Neutralizer on Rogue to prove that the government doesn't need the help of superheroes like the Avengers to handle super powered threats. 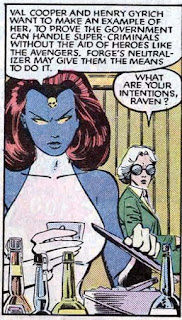 She also discusses with Destiny whether or not it would be better to allow Rogue to lose her powers, a not unreasonable idea.

Claremont continues to sprinkle the book with references to Bill Mantlo's Rom, as Gyrich mentions that SHIELD is busy fighting against the Dire Wraiths, leaving him to confront Rogue with a team comprised of FBI and Secret Service agents. He also sets up an extended appearance by the Wraiths in the issues ahead.

I Love the 80s
It could be entirely coincidental, but the name of the river boat caught up in Rogue's storm is Longshot Annie. A few years from now, editor Ann Nocenti will write a Longshot miniseries, introducing and starring the titular character and future X-Man.

Rachel Summers, Crybaby
Upon hearing Scott and Madelyne's voices on the phone, Rachel promptly bursts into tears (the phone cord serving as the panel divider is a neat trick, though, and also, remember phone cords?). 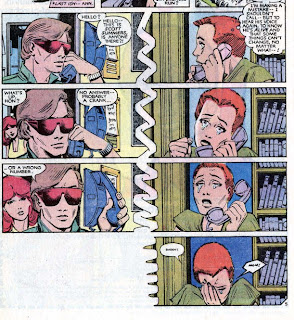 Human/Mutant Relations
Forge is incensed that Gyrich would use the Neutralizer prototype on Rogue or Storm, noting they were helping save lives when Gyrich fired on them, and that whatever their alleged crimes, they're innocent until proven guilty under the law. 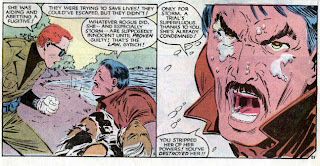 For Sale
There's as ad for The Last Starfighter, one of those seemingly-beloved 80s movie I've never actually seen. 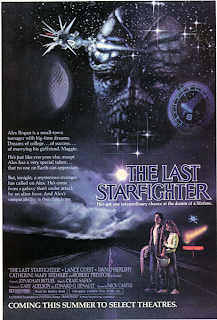 This issue is featured in a Marvel house ad. 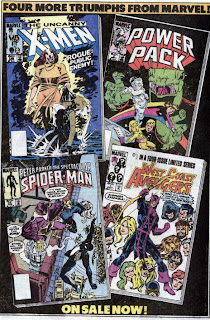 It's in the Mail
Madelyne answers the letters in this issue, pertaining to issue #176. She has to deal with an especially hostile crowd, as letters take the book to task for everything from the squid/octopus mismatch (Madelyne says she was too busy fighting for her life to care) to Madelyne's changing bikini colors (she changed swimsuits) to the large gap in the letters page coverage: 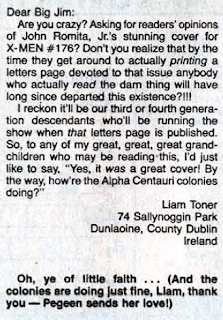 Teebore's Take
Picking up where issue #182 left off, this issue continues to further Rogue's development, filling in some details regarding the nature of her power and really putting forth for the first time the notion of her power as a curse that doesn't allow her physical contact. It also ties together some of the threads lingering in the book from previous issues, such as the fallout from Rogue's actions in issue #182 and the Raven/Val/Forge material from #183 and #184. But it's truly notable for the significant change it marks in Storm. Just as she and her teammates (and the readers) were coming to terms with her harsher edge, both in terms of personality and physical appearance, she undergoes another transformation that will define her character for the next forty odd issues, making more literal her previous transition from the ethereal goddess to the grounded warrior.

That the transformation is triggered by an attack by the US government is significant. While not quite on the level of the species-wide incarceration and near extinction depicted in "Days of Future Past", so recently brought back to the forefront by the presence of Rachel, it does make clear that, as Forge angrily spits at Gyrich, the government is willing to play judge, jury and executioner when it comes to mutants, in full ignorance of the law. What began as general unease leading into possible legislation has become unilateral action, and while the Neutralizer itself will prove to be little more than a MacGuffin du Jour, Claremont  is continuing to make the world in which the X-Men find themselves darker and more dangerous.

Next Issue
Tomorrow, the "Demon Bear Saga" concludes in New Mutants #20, and next week, Claremont teams with Barry Windsor Smith for "Lifedeath" in Uncanny X-Men #186.
Newer Post Older Post Home
Posted by Austin Gorton at 10:30 AM