The Walking Dead 5x11: The Distance 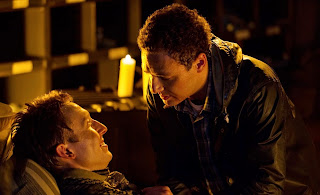 Trust. Trust is tough to earn and even tougher to give. How do you know who is trustworthy? What can someone do to gain a person's trust? Especially when the people whose trust they're trying to earn have been burned by trusting others so many times before.

In the zombie apocalypse, trust is even harder to give. If you trust the wrong person you could very well end up dead. Sure, Rick's group's incredible distrust of everyone can be annoying a lot of the time but I do sympathize with their dilemma. For the most part, Rick's group just runs into cannibals, kidnappers and megalomaniacs. So when a stranger named Aaron arrives offering to take them to a safe haven, who can blame them for being a bit suspicious?

Maggie and, somewhat surprisingly, Michonne are the first to trust Aaron. (And by trust, I mean, they want to check out and validate what he's saying instead of straight up murder him and take whatever he has.) I think their trust is more born out of desperation than anything else. Rick's group is barely surviving and don't have much positive to look forward to. Any glimmer of hope must be very tempting.

The rest of the group slowly but surely begins to trust Aaron. Or, at least, they want to see where he leads them. Well, everyone but Rick. He refuses to trust Aaron under nearly any circumstance.

In case you didn't know, Rick is super untrusting. I get it to a point. He's the only person who is in charge of two kids. He also has taken on a leadership role and feels responsible for the group. Any wrong decision that could cost lives and weigh heavy on him. Trusting someone means leaving the group vulnerable and that's hard on Rick.

But, despite me understanding Rick's trepidation, he annoyed me, a lot. Just because someone you don't know could be a rapist, murderer or thief doesn't mean you have to treat them like they already have raped, murdered and stolen. There's a fine line between being cautious and being an asshole. When Rick coldcocked Aaron before he finished his introduction speech my eyes nearly rolled out of their socket.

The second super annoying part was when Rick insisted on taking a different route. The entire audience (and Aaron) knew that it would be trouble but Rick decided to go the other route anyway. Predictably, he drove them right into a zombie stampede. It was a suitably tense and enjoyable scene but it was undercut by the fact that Rick stupidly put them in that situation.

In the end, though, even Rick was forced to start trusting, little. At least he's seeing where things go. Even after entering the promised walled city I still don't think Rick trusts them, but at least this episode gave us viewers something even more valuable than trust, hope.

Other Thoughts:
Sorry for the delay in this recap. A combination of The Academy Awards, life, work and laziness got in the way. Better late than...never?

For being a person from Atlanta, Rick has an amazing knowledge of the roads around Washington D.C.

Aaron is kind of in a no win situation. If he acts like an asshole then he's an asshole. If he acts nice, like he did, then it seems suspicious.

I liked Aaron's little monologue on if it matters how many people he says are out there. Aaron makes a lot of logical points about him having many opportunities to kill them before if he wanted. Then again, all those points are valid unless Aaron and his group are cannibals. I don't think they are but you know that has to be on Rick and Company's mind.

Ill-fated highway journey aside, I didn't mind Rick's stratagems regarding investigating what Aaron was saying. I just wish Rick came up with the plan because he wanted to trust Aaron and not because he was forced to by others in the group.

I don't care if Aaron hates apple sauce. He should have sucked it up and eaten the apple sauce.

Also, after practically forcing the apple sauce down Aaron's throat, he didn't wait very long to see if there are any ill-effects before feeding it to Judith.

I did find Rick saying he's unsure if anything can convince him to trust was interesting. At least he's being honest with himself.

Glenn and Aaron's shooting was WAY to accurate.

In the Star Trek episode Mirror, Mirror, Spock (RIP) said "It was far easier for you as civilized men to behave like barbarians, than it was for them to behave like civilized men." I wonder if Rick and Company will have similar issues now they have found themselves in a walled city that, at this point, seems civilized.
Newer Post Older Post Home
Posted by Dr. Bitz at 6:05 PM