To Better Know a Team: The New Mutants 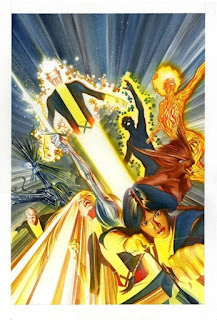 After a laughable number of starts, stops, and reschedules, the New Mutants movie is finally in theaters (at least whichever ones are open). And while I in no way advocate going to see it (for various reasons, including the fact that I doubt any movie is worth risking your life to see, but am certain that if there is one, it's not New Mutants), that doesn't mean we can't take the opportunity to spend some time talking about Marvel's first comic book X-Men spinoff.

I wrote a retrospective on the series back when my reviews of it ended (upon the book's cancellation & relaunching as X-Force), which can be found here; in that article, I hit some of the obvious points (like my favorite covers and favorite New Mutants), most of which remain true today. So here are some different/deeper dives into the world of New Mutants. The movie might suck, but we'll always have the comics. 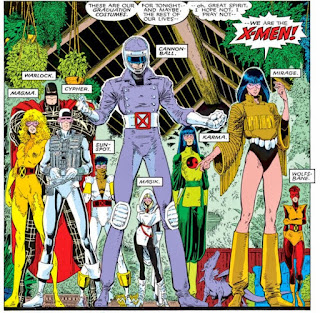 In X-Men Annual #10, Mojo brainwashes the X-Men and the New Mutants have to "graduate" to battle (and free) the senior team. To do so, they don new costumes, which they will return to a few more times after their initial appearance. They're generally...not great, but here's the top five ranked.

5. Warlock - the techno-organic mutant transforms himself into a buff Superman-esque figure with a cape. Nothing groundbreaking, but still better than four other costumes.

4. Cannonball - Ditch the helmet (in general, all these costumes suffer from an excess of...stuff) and this goes up a few notches. The color and Rocketeer-esque flight-suit design would be repeated in his last New Mutants/first X-Force costume.

3. Magma - Giving the girl with fire powers an orange fiery costume is a no-brainer, but it stands out for its relative simplicity, and helps underscore her powers without having her running around naked & Human Torch-esque when powered up.

2. Sunspot - The deep V gives it something of a dated look, but the white costume especially pops against Roberto's coal black powered up form.

1. Magik - The clear standout of the bunch and the one I wish became her default look, it perfectly conveys her abilities as a sword-wielding sorceress, with the raised hood giving her a reserved, aloof appearance that matches her personality at the time. 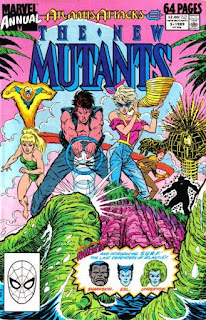 Annual #7 is more of an X-Force story than a New Mutants one, and Annual #4 is pretty terrible (it features Dani's nonsensical power upgrade and the whole team acting like brats). So this Rob Liefeld-drawn installment of "Atlantis Attacks" makes it into the top 5 more or less by default. 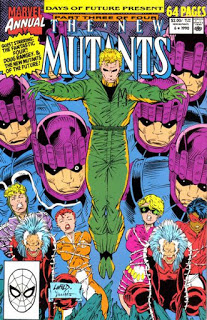 An issue which is better for being less connected to the larger "Days of Future Present" story of which it's (confusingly) the second part, but still only mostly okay. 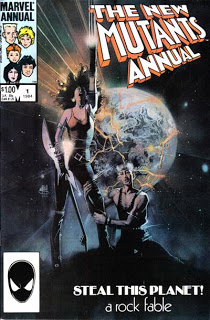 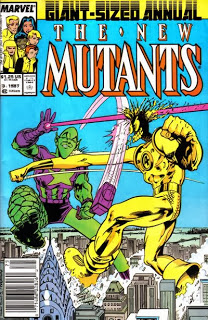 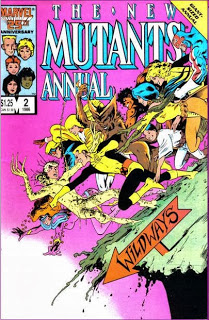 Another Alan Davis joint, this issue introduces Psylocke to an American audience and puts Doug Ramsey front and center, to great effect.

Top 5 Lamest Villains
Ostensibly meant to be students, not superheroes, that didn't stop the New Mutants from fighting their fair share of super-villains. Including some especially lame ones. 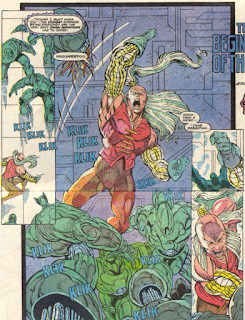 He'd go on to bigger things (sort of) in X-Force, but during his brief introductory tenure in New Mutants, he was little more than a collection of vague mysteries & Liefeldian tropes. 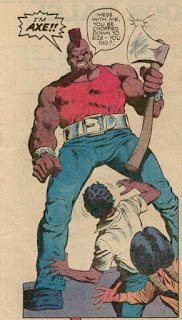 I pity the fool who has to read about this warmed over Mr. T knock-off. 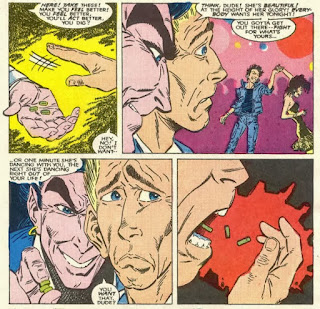 An intergalactic jewel thief targeting Lila Cheney who engages in a ham-fisted drug PSA with Cannonball.

2. Spyder - Basically Raek, but hanging around for more than one issue and foisting Gosamyr on the team (who only avoids the title of "Worst New Mutants" thanks to the existence of Bird Boy). 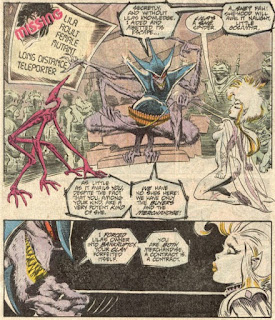 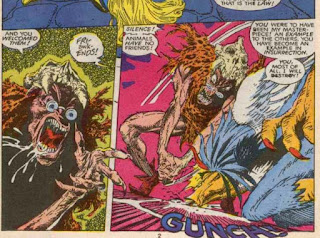 Notable for killing Doug Ramsey, this whacked out anti-mutant scientist in a leopard skin shawl doesn't deserve the notoriety that act gives him.

Top 5 New Mutants Stories
In my series retrospective, I highlighted the top five single issues of the series. Here, then, are the book's five best multi-part stories. 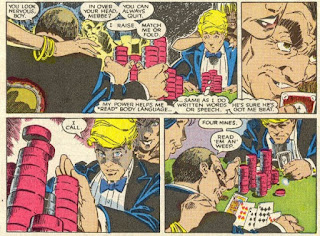 Chris Claremont's final regular New Mutants story is packed with great character moments (Doug getting drunk, Karma quitting the team to track down her missing siblings) and low-key action as the title characters attend a party at the Hellfire Club and get drawn into a competition with the Hellions. It's the series' best use of the New Mutants' villainous opposites, casting the two groups as the super-powered rival schools they always were at their core. 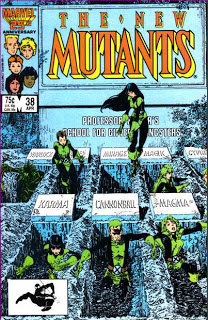 Making the most out of the lackluster company wide Secret Wars II event, Chris Claremont uses the omnipotent Beyonder's destruction of the New Mutants (and their subsequent rebirth) as a vehicle to explore the series' new status quo in the wake of Professor Xavier's departure & Magneto's arrival as their new headmaster. The end result is a bleak, harrowing story in which the New Mutants grapple with their mortality & the mental ramifications of experiencing death & rebirth while the White Queen takes advantage of the situation to coerce Magneto into briefly turning his charges over to her, culminating in a tons-of-fun issue in which a reformed Magneto must battle the Avengers. 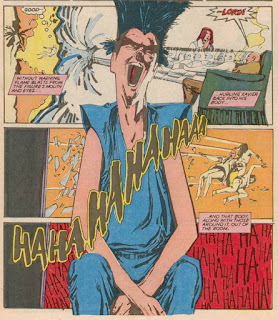 The second-best Bill Sienkiewicz-drawn New Mutants story, this one introduces Professor Xavier's unknown (to him) son, Legion, a massively-powerful mutant suffering from multiple-personality disorder. In the course of trying to help his son, Xavier and a contingent of New Mutants are pulled into Legion's fractured mind, allowing Sienkiewicz to pull out all the stops in depicting the surreal, metaphoric landscapes that need not follow the laws of physics. It's only held back on this list for the fact that the New Mutants themselves are largely incidental to the story (they're in it, but don't really drive it). 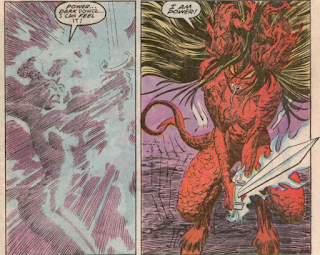 "Inferno", the culmination of several years' worth of X-stories, spread out to encompass nearly the entirety of the Marvel Universe, is a sprawling story with multiple threads & characters driving the action, but one of those is the tale of Illyana Rasputin. Though she didn't join the series as a regular until issue #16 (and this story more or less ends her involvement in the series, a dozen or so issues before the book itself ends), New Mutants, as whole, could very much be read as the story of Illyana's rise & fall, her attempts to come to terms with her demonic upbringing, and her struggle for the control of Limbo, the arcane realm she rules (and whose invasion of Earth serves as the backdrop for the crossover). In these three issues, written by Claremont's successor on the series, Louise Simonson, and drawn by Brett Blevins, whose more cartoony style contrasts effectively with the darker, arcane trappings of the story, Illyana reaches her lowest point as she loses control of Limbo and is consumed by darkness, only to battle back enough to sacrifice herself in order to spare her younger self from the traumatic events which shaped her. 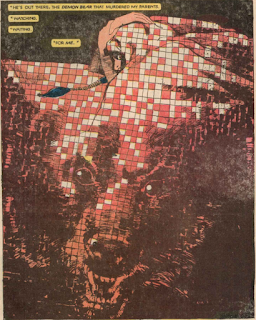 Essentially the New Mutants "Dark Phoenix Saga", in which all the various facets of the creative process come together & fire on all cylinders, there's no surprise this is the New Mutants story chosen to adapt into film. It heralds the arrival of Bill Sienkiewicz on the series, and with it, a more mature take, both in terms of the art, the characterization, and the plot, as Chris Claremont leans into the strengths of his artistic collaborator (house ads released around this time, featuring Sienkiewicz art, insisted readers couldn't call the New Mutants "X-Babies" anymore). Though a team book, in its first year-and-a-half of existence, it had become clear that Dani Moonstar was the series' de facto lead, and she takes center stage in this story, leading her classmates against a demonic figure from her past, the mystical Demon Bear who (seemingly) slew her parents. Filled with sweeping moments of grand heroism, quieter characterization beats, and eye-popping visuals on nearly every page (as well as the first appearance of future New Mutant Warlock & the arrival in the present day of future Phoenix Rachel Summers, as well as some...questionable physical changes for a pair of supporting characters), "Demon Bear" is the gold standard of New Mutants tales.
Newer Post Older Post Home
Posted by Austin Gorton at 12:00 PM