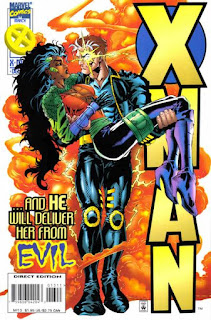 In a Nutshell
Nate meets Threnody

Plot
Threnody is hunted through the sewers of Paris by the Marauders. After spotting an explosion triggered by their fight, Nate hears her telepathic distress and flies into the sewers, helping her escape. Meanwhile, not far away, Madelyne Pryor notices the effects of Nate's fight with the Marauders, but her curiosity about it is blunted by Selene. Back in the sewers, Threnody introduces herself to Nate, and in the process, Nate learns that Mister Sinister is alive in this world. Nate then proceeds to ambush the pursuing Marauders, leaving only Riptide alive, his mind altered to make Sinister believe Threnody perished with the rest of the Marauders. Nate & Threnody leave the sewers, but they are unknowingly still being pursued: by Cable, who is close to catching up to Nate, and won't stop until he does.

Firsts and Other Notables
Threnody meets Nate for the first time, and effectively joins the supporting cast of the series, as she'll be a recurring presence in the book for the next dozen or so issues.

Cable appears briefly in the closing panels, setting up the crossover between his series and this one, which begins in Cable #30 and continues in X-Man #14. 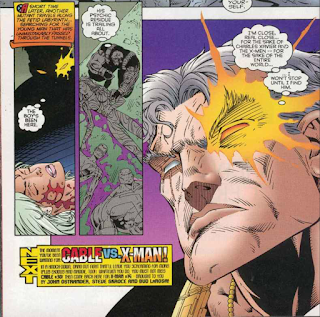 Selene & Madelyne Pryor, last seen in issue #7 (in which Madelyne abandoned Nate for Selene) pop up briefly in this issue, mostly to remind the audience they are still out there ahead of their larger return in issue #16. 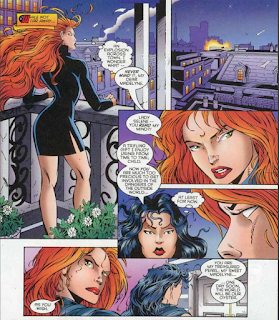 Nate battles Mister Sinister's Marauders in this issue (or rather, clones of the Marauders, even though his genetic templates for them were meant to be destroyed by Threnody herself in X-Men (vol. 2) #34). 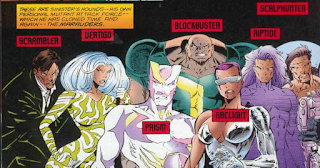 The Chronology Corner
Nate appears here after Excalibur #95 (which concludes the crossover between that series and this one which began last issue).

A Work in Progress
Threnody explains to Nate what her name means.

Artistic Achievements
Not sure why Luke Ross decided to focus on Nate & Threnody's butts in this panel, but he did.

Austin's Analysis
This is a fairly routine issue plot-wise - Nate meets Threnody, Nate fights the Marauders for a few pages, then defeats them - with art that isn't spectacular but isn't dreadful, either. Fortunately for this issue (though not the series), "competent storytelling" clears a rather low bar for this book, so this reads much better than it objectively should. Nate battling the Marauders is a fun one-off, and the balance between him being outnumbered and them being out-powered by Nate feels about right (in that Nate doesn't just roll over them, but also, it doesn't take him more than an issue to defeat them pretty soundly). Plus, with the introduction of Threnody, the book once again has something it has desperately lacked more or less since Madelyne's random departure: someone for Nate to talk to, the beginning of an actual supporting cast, so the entire series isn't just spent inside Nate's head as he bangs against whatever one-or-two-off guest star drops by. By no means is this a terribly compelling issue - its base level of competency is really only enjoyable because the book has failed to reach that level far too often - but it represents another (small) step in the right direction.