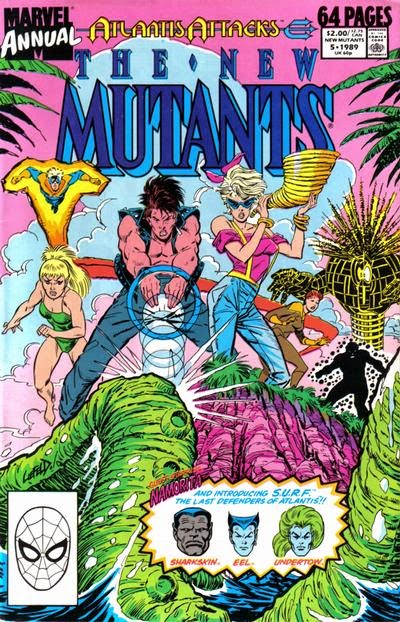 In a Nutshell
The New Mutants team-up with Namorita and SURF to battle Ghaur.

Plot
Learning of the New Mutants recent discovery of the Horn of Doom, Ghaur and Llyra conspire to acquire the Horn for themselves, so that it may aid Set in dominating the Earth. To that end, Ghaur sends three Deviant warriors, each of whom resembles one of the New Mutants, to steal the Horn from Namorita, Namor's cousin, to which he entrusted it for safekeeping. Meanwhile, the New Mutants arrive back on Earth, only to discover Ship missing from his position over the Atlantic Ocean. Leagues away, the Deviants attack Namorita in Atlantis, attracting the attention of three Atlantean mutants, dubbed SURF, who come to her aid, though the Deviants succeed in acquiring the horn and escaping. Believing the Deviants to be the New Mutants, Namorita and SURF track down and attack the young mutants. 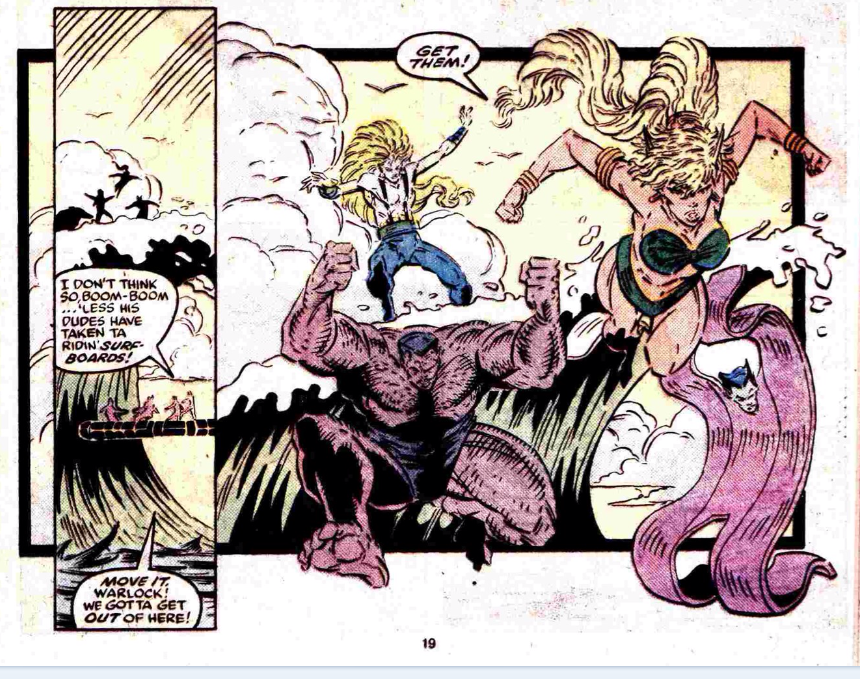 Namorita eventually realizes the New Mutants were framed, and they agree to help her recover the Horn. Meanwhile, Ghaur has arrived on the outskirts of Atlantis, and blows into the horn. The sound is heard by the Atlanteans and Warlock, enabling them to home in on the Horn's location. They arrive to discover a massive sea monster attacking Atlantis, sent there by Ghaur to slaughter the inhabitants as a sacrifice to Set. Working together, the New Mutants and SURF lure the creature away from the city and into a deep trench nearby, where they trigger an avalanche and bury the creature. But the damage has been done, with the city heavily damaged, many of its inhabitants dead, and the water around it poisoned by the monster's blood. Namorita and SURF vow to hunt down Ghaur and the Deviants and make them pay for what they've done, while the New Mutants resume their search for Ship, having gained a sense of perspective regarding their situation.

Firsts and Other Notables
This marks Rob Liefeld's first time drawing the New Mutants, coming a few months ahead of his assumption of regular penciling duties on the series itself.

This issue is a follow up to New Mutants #76, subbing in Namor's cousin (and future New Warrior) Namorita for Namor and featuring the Horn of Doom (the conch shell with which the New Mutants accidentally summoned a massive sea creature), set amidst the ongoing "Atlantis Attacks" story as Ghaur, taking advantage of the absence of his ally Attuma, current ruler of Atlantis, sacrifices the city to Set.

Namorita is joined by SURF, three super-powered Atlantean mutants.This is their first appearance, and I believe their only other appearance is in an annual back-up story later in "Atlantis Attacks".

The second story in this issue features Boom-Boom breaking the fourth wall and interacting with her artist (former Power Pack and future X-Factor penciler), Jon Bogdanove, in a dream, proceeding to rate various men throughout the Marvel Universe in terms of their hunkiness and compatability. It's the kind of goofy and lighthearted fluff that started showing up in the second or third positions of annuals around this time.

In addition to the second story and the ongoing Serpent Crown historical retrospective, the issue is rounded out by a series of pin-ups by Liefeld, including one featuring former New Mutants team members, giving us a rare glimpse at Liefeld's take on some departed characters (in a testament to his design, not even Liefeld can make Art Adams' Magik costume look bad). 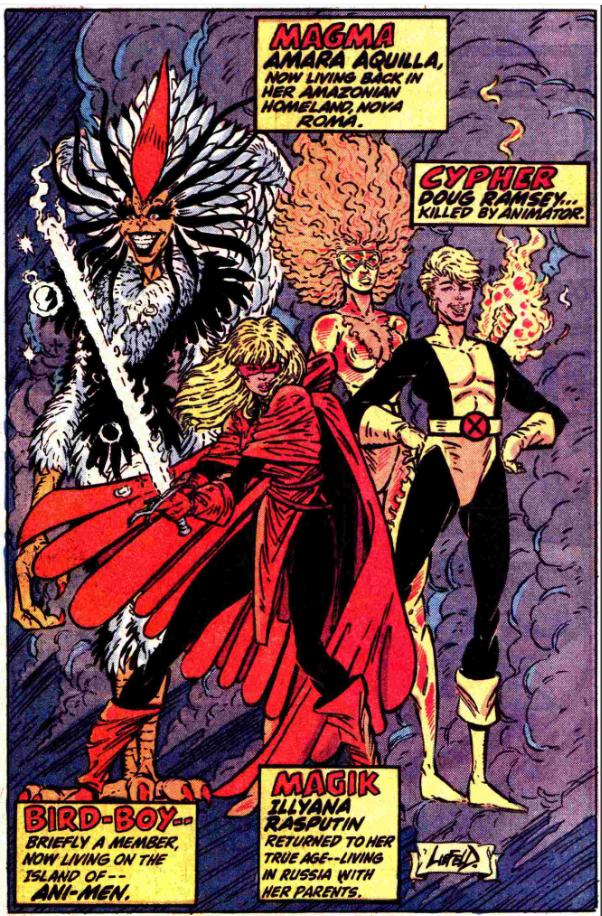 The current group shot features Rusty and Skids prominently, even though they'll be written out of the main series very soon after Liefeld's arrival. 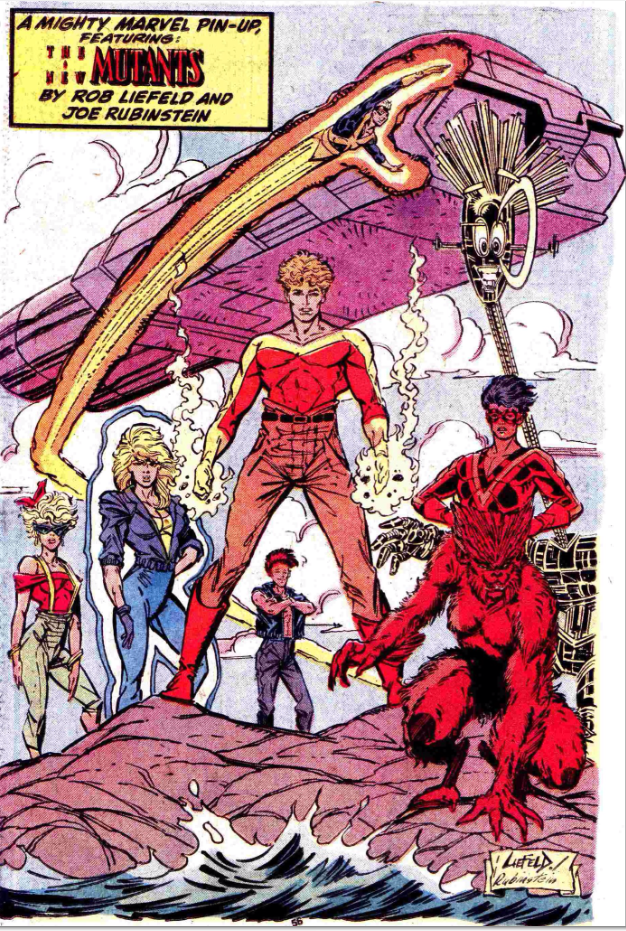 The Chronology Corner
This is a tough issue to place in context of the larger X-Men narrative. Chronologically, it takes place towards the end of New Mutants #87, after the team has completed their upcoming Asgardian adventure, yet it was on sale at the same time as New Mutants #80, while the team was still in Asgard, and thus, to anyone reading it at the time, it spoils the end of that story.

Furthermore, it's obviously a part of the "Atlantis Attacks" storyline, and while it was on sale the same time as the other tie-in annuals, those annuals clearly take place around issues set before the New Mutants go to Asgard. So holding back this one until after the Asgardian story mucks up the overall chronology more than it should.

Long story short, there's no good place to slot this annual in, so we're looking at it now, around the same time as the other "Atlantis Attacks" annuals take place, rather when it was on sale (circa issue #80) or takes place (issue #87), the better to just get the X-books' contributions to "Atlantis Attacks" over and done with (For what it's worth, the Marvel Chronology Project places this issue between issues of #76 and #77 of New Mutants, while the Grand Comics Database places it between pages of New Mutants #87).

A Work in Progress
Boom-Boom notes that at some point X-Factor was made her and Rictor's legal guardians. 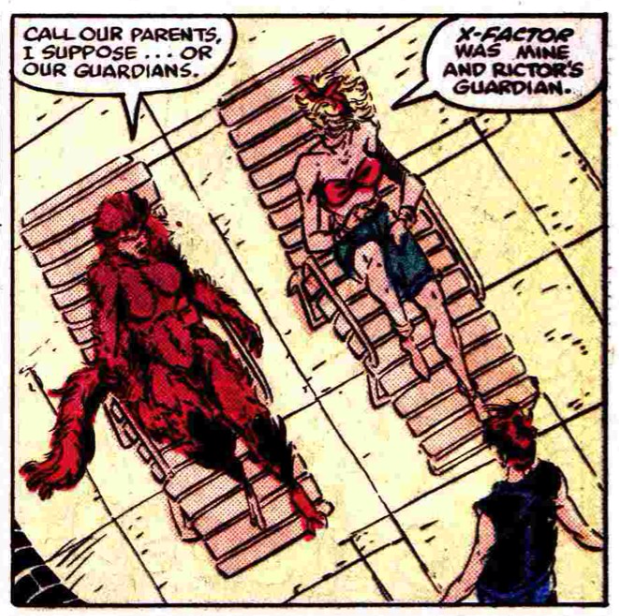 It's suggested that Roberto's super strength also gives him the ability to hold his breath longer. Not sure how well that follows.

I Love the 80s
Despite living underwater, Namorita is shown to sleep in a skimpy negligee.

Teebore's Take
Well, this is pretty much a mess. It's basically just a rehash of New Mutants #76 (which was a perfectly serviceable done-in-one issue but certainly wasn't crying out for an extra long reprisal), with Namorita swapped in for Namor, complete with two different hero misunderstanding fights, featuring some unremarkable Atlantean mutants, tossed in to pad out the page count. There's some historical novelty in seeing Rob Liefeld draw the New Mutants for the first time, but the setting does his work no favors: aside from when they're riding on Warlock, the New Mutants don't ever really end up on solid ground for the entirety of this story, making the figures' sense of place on the page even more nebulous than it usually is with Liefeld. The end result is an issue that, artistically, becomes more difficult to follow than it should be (it also doesn't help that someone, either Liefeld or inker Tom Dzon, decided to draw in as many bubbles as possible in the underwater scenes; it may be more realistic, but it makes things even more cluttered and hard to follow). Bottom line, this is just another ho-hum "Atlantis Attacks" chapter with little to recommend it.

Next Issue
Tomorrow, Havok and Wolverine melt down in Meltdown #1-4. Next week, the X-Men battle a giant robot in Uncanny X-Men #246 and the New Mutants visit a strange doctor in New Mutants #77.
Newer Post Older Post Home
Posted by Austin Gorton at 12:00 PM