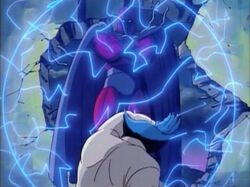 Plot
Magneto breaks into the prison where Beast is being held, intent on releasing him, but Beast resists, intending to stand trial to prove the worthiness of his cause. Later, Professor X watches news footage of Magneto's attack, and tells Jubilee about their shared past together. The next morning, Beast is in court. After the judge orders Beast to be held without bail, the courtroom is attacked by a mutant Wolverine recognizes: Sabretooth. When the guards overwhelm him, Cyclops intervenes, bringing the unconscious Sabretooth back to the X-Mansion, much to Wolverine's dismay. At the X-Mansion, Wolverine argues vociferously that Sabretooth is a killer and doesn't deserve to live, but the argument is cut short by an attack by Magneto at a missile base. Cyclops, Storm, and Wolverine respond, and though they manage to fight off Magneto, they can't stop him from launching the base's missiles. Storm flies into the air and, with Xavier's guidance, is able to direct the missiles out to sea, where they crash safely. As the X-Men return home, Magneto watches from a distance, impressed by Xavier's training but curious why he has turned against his own kind.