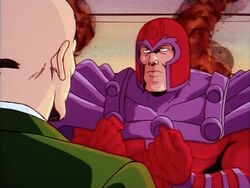 Plot
Professor X attempts to telepathically cure Sabretooth of his animalistic rages, much to the continued dismay of Wolverine, but his efforts are cut short when Magneto attacks a chemical plant, endangering the humans there deliberately to draw out Xavier and the X-Men. The X-Men attack, and Magneto manages to overpower them, but is fought off by Xavier himself, who enters the fray and telepathically causes Magneto to relive his worst memories. Meanwhile, Senator Kelly announces his bid for the presidency, while at the mansion, Sabretooth tricks Jubilee into releasing him. He's about to kill her when Wolverine intervenes, and the two fight. The returning X-Men are aghast, believing Wolverine to have attacked the helpless Sabretooth, but Jubilee explains what happened. After Sabretooth manages to injure Wolverine, Jubilee hits him with her fireworks, blasting him out of the mansion, after which he runs away. As the X-Men bring the injured Wolverine to the infirmary, Magneto looks out over the city, firm in his belief that mutants will flock to him by the thousands, and they will destroy Xavier.