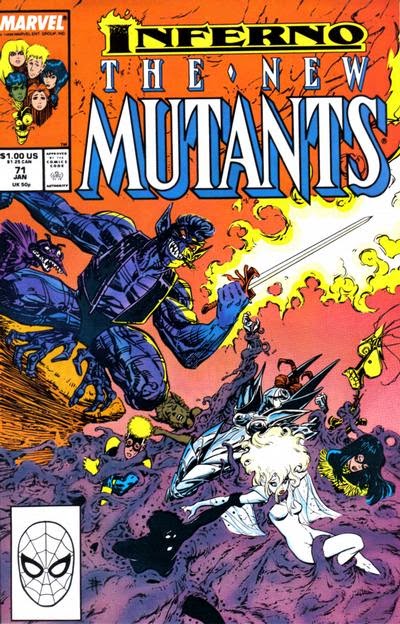 In a Nutshell
Illyana is tricked into opening the portal that brings Limbo to Earth.

Plot
With Illyana unable to open a stepping disc out of Limbo, the New Mutants attack S'ym and his the demon horde. During the fight, S'ym manages to wrest Illyana's Soul Sword from her grasp. Realizing she can still teleport within Limbo, Illyana escapes with her teammates. Just then, N'astirh contacts S'ym from Earth, admonishing him for trying to kill Illyana and revealing it is his magic which is keeping her from leaving. The New Mutants emerge in Belasco's former throne room, and when S'ym's demons track them there, Illyana jumps the team into the past, where they see her as a small girl shortly after she arrived in Limbo. They watch as N'astirh saves the young girl from S'ym. Back on Earth, Magneto and the Inner Circle are attacked by the growing Empire State Building, and the White Queen's hears the telepathic cries of the tourists inside as they're killed. 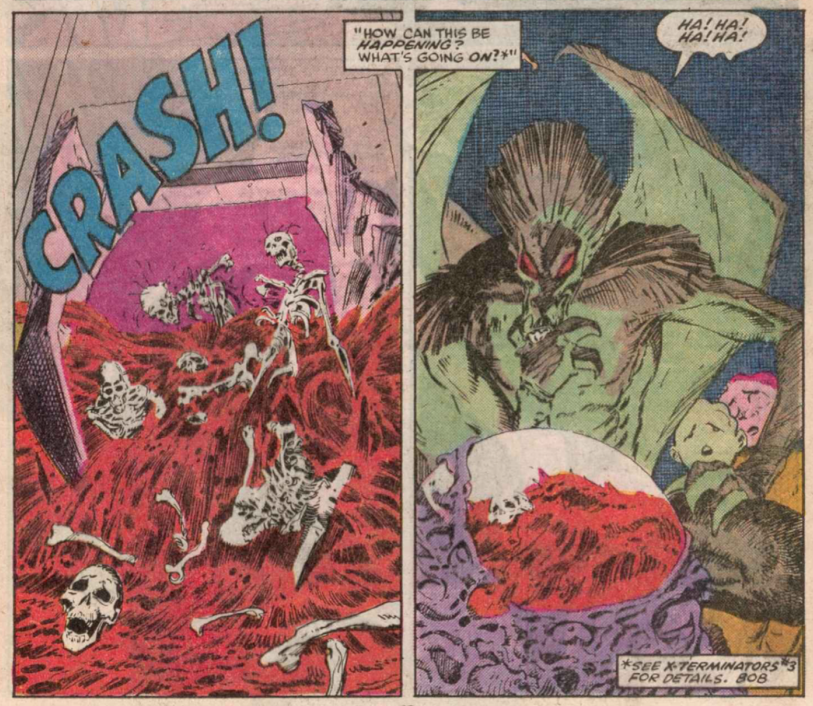 Back in Limbo's past, the New Mutants confront N'astirh, who offers to help them escape to Earth because of his love for Illyana. He tells her she needs to reclaim her sword from S'ym and embrace its dark power in order to get home. Willing to sacrifice herself to save her friends, Illyana agrees, and N'astirh teleports them to S'ym, where she reclaims the sword and transforms fully into the demonic Darkchilde. Now able to open a stepping disc to Earth, the New Mutants return to Earth, not to their school but in Times Square, and behind them, demons pour out. As Sam urges her to close the portal, Illyana finds that she can't. Spotting N'astirh, she confronts him, saying he lied to her. He insists he told the truth: only she, with her sword, had the power to open the portal to Earth, though he now possess the power to keep it open. He then reminds her that while he does love her, he is still a demon.

Firsts and Other Notables
This issue ends with Illyana creating the stepping disc which N'astirh takes control of in X-Terminators #3, creating the portal which allows for the demons of Limbo to invade Earth. 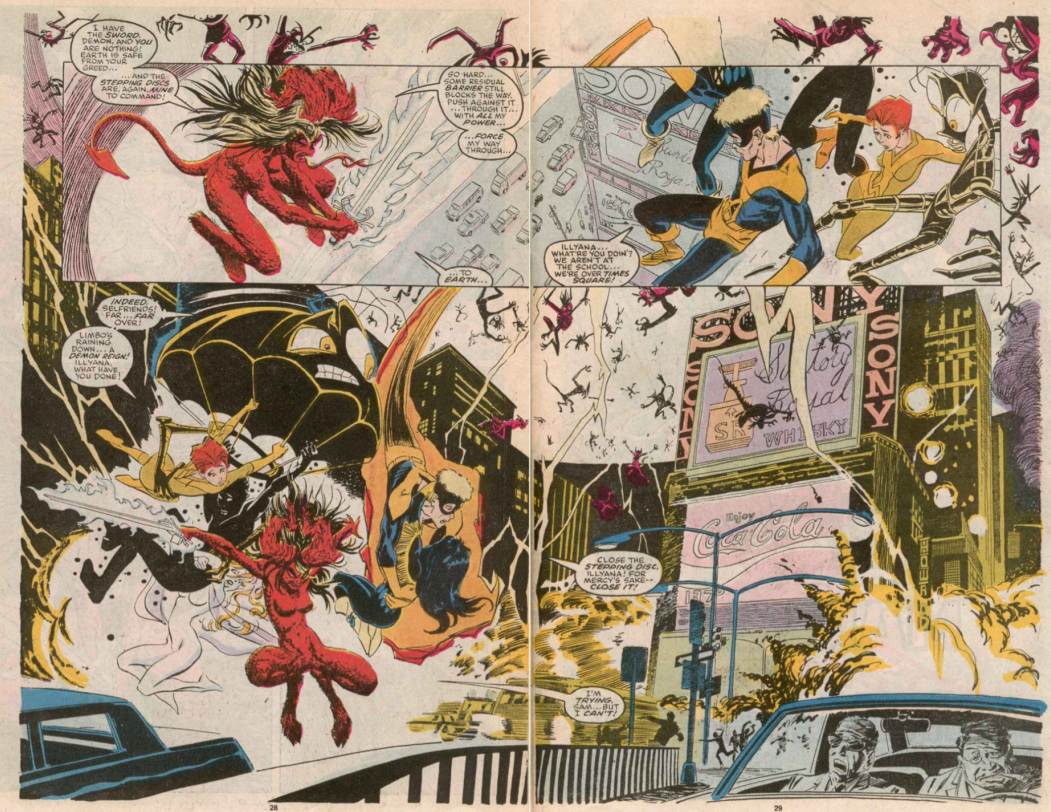 The Chronology Corner
Present day-N'astirh appears between pages of X-Terminators #3, with the ending of this issue (as Ilyana opens the portal to Earth) running parallel to the end of that issue (as N'astirh creates the pentagram made of babies that takes control of Illyana's stepping disc).

A Work in Progress
Illyana notes that (seemingly) fufilled Destiny's prophecy of leaving Earth and learning (that others struggle with inner darkness like she does). S'ym rightly points out that Limbo is a reflection of its master, so its currently turmoiled state is Ilyana's fault.

As a result of Limbo's growing power, it even escapes through her sword, which explains why things she's struck with the sword of late become demonic.

Illyana muses that she may have a natural affinity for Limbo, since her mutant power is tied to it, which explains why she heard and saw Belasco back on Magneto's island when she was a little girl.

Illyana senses that N'astirh has the potential to be as powerful a sorcerer as she is.

Still in New York with the Hellfire Club, Magneto and the rest of the Inner Circle note the ever-growing Empire State Building, and are attacked by demons. Magneto notes that the Inner Circle members have laced metal threads into their costumes, enabling him to catch them, but we're well past the point where the whole "reversing gravity" schtick has been used as a blanket explanation for stuff like that. 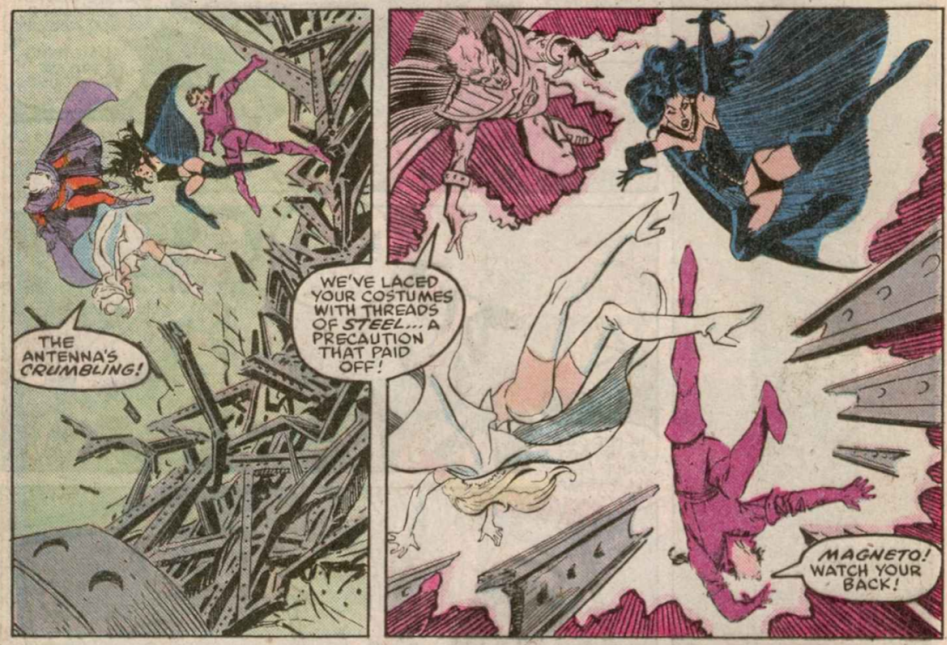 By the end of the issue, Illyana accepts her dark side and transforms into a fully demonic Darkchilde. 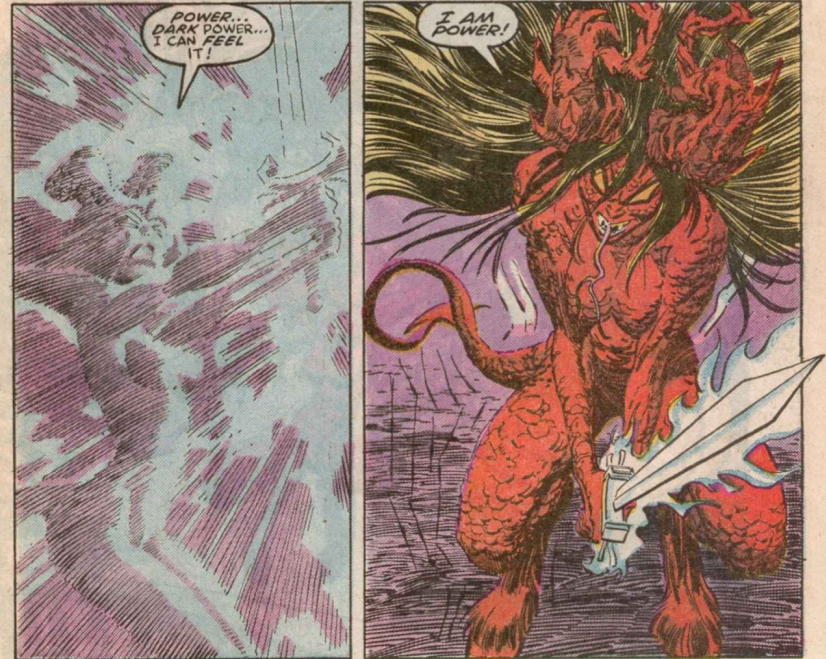 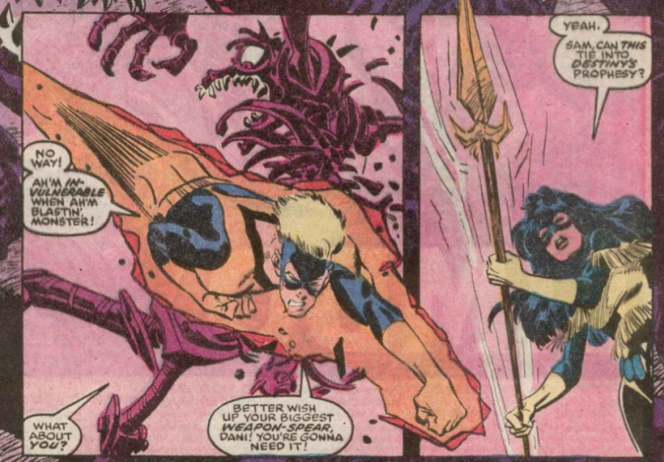 Young Love
N'astirh is apparently in love with Illyana, and hopes that one day she'll join him as a Dark Bride. 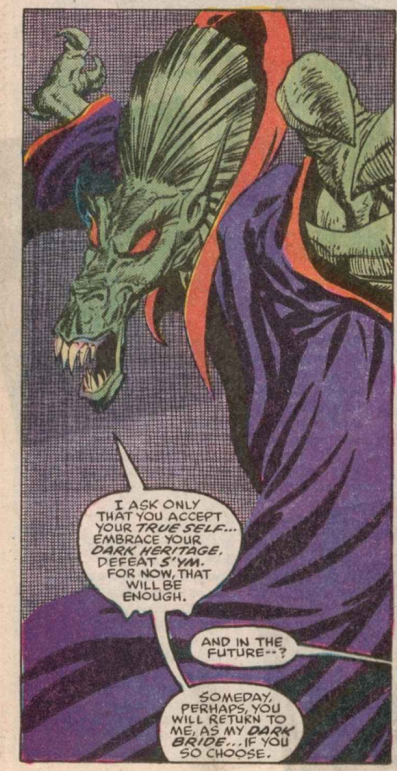 Teebore's Take
In terms of New Mutants, the story of "Inferno" is really Illyana's story - it serves, at least for a good long while, as the conclusion to her story arc, something characters in superhero comics rarely get. As such, as much as this issue moves the story of "Inferno" along by having N'astirh trick Illyana (across two time periods!) into opening a portal between Earth and Limbo (allowing for the central invasion of the story to commence) and bringing to a head all the cryptic prophecies and dire warnings Illyana's had to deal with other the last several months, it's also about showing us where the character is coming from, and what the stakes are for her.

So we see young Illyana, chased through Limbo by S'ym, something most of the New Mutants had never even heard about (and which also serves as a nice refresher for new readers who may not have read Illyana's miniseries), and we hear present Illyana bemoan all the deaths of loved ones she witnessed while growing up in Limbo. It's a reminder of just how much she's overcome, and just how hard her battle with her demonic side is. It raises the stakes of the larger "Inferno" conflict while grounding it in a character we care about: for all the spells and techno-organic viruses and demons and portals, at the end of the day, "Inferno" (at least this part of it), is about how that seven year old girl became a red, scaly demon, and how to keep her from getting any worse.

Next Issue
Tomorrow, X-Factor joins the hunt for Cyclops' son in X-Factor #36. Next week, "Inferno" reaches the rest of the Marvel Universe in the first batch of "Inferno" tie-ins, while Excalibur #4 stays flame-free.
Newer Post Older Post Home
Posted by Austin Gorton at 12:00 PM