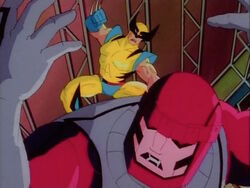 "Night of the Sentinels Part 2"

Inside the Mutant Control Agency, Wolverine's senses prevent the X-Men from falling into the agency's trap, and while Cyclops leads an attack on the guards gathered outside, Storm leads her group deeper into the agency to destroy their mutant files. Elsewhere, Henry Peter Gyrich &amp; Bolivar Trask interrogate the captive Jubilee before receiving a call about the trouble at the agency; he orders all the mutants there to be terminated. As the X-Men reunite outside the agency, Cyclops orders a retreat. Just then, the Sentinels appear, and Morph pushes Wolverine out of the way of one of their blasts. At the X-Mansion, Jean Grey &amp; Professor X sense Morph's death. Shortly thereafter, the dejected X-Men return home, without Morph or Beast. Angry, Wolverine heads off on his own, driving away as he thinks back to Morph's death &amp; Beast's capture by the agency, upset that Cyclops prevented them from going back for their teammates. Wolverine vows to avenge them. Later, Wolverine is playing pool at a dive bar when Cyclops enters, asking him if he wants to find the Sentinels base. After the President orders Gyrich to cease the Mutant Control Agency's activities, he receives a call from Jubilee's foster father, seemingly turning in the visiting Cyclops. But Cyclops instead attacks the arriving Sentinel, damaging it and thereby allowing the X-Men to follow it to its base, where Jubilee is being held. There, the X-Men rescue Jubilee &amp; destroy the Sentinels, though Gyrich &amp; Trask escape. Later, Jubilee says goodbye to her foster parents before arriving at her new home with the X-Men.