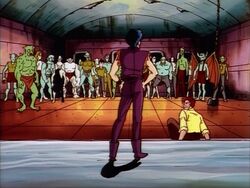 Plot
After Storm's claustrophobia proves problematic during a Danger Room session, she is left questioning her effectiveness as a leader. Meanwhile, Cyclops & Jean are on a date when they come across a young mutant child being chased by an angry mob. They follow the mob into the subway, hoping to protect the mutant, but when they reach the station, they find a group of mutants attacking the mob. Cyclops & Jean fight the mutants, but one of them uses her power to lull them to sleep on the orders of their leader, watching from the shadows. Later, Cyclops wakes up to find his powers turned off. He is brought before the mutant gang's leader, Callisto, who declares her followers to be Morlocks. Jean wakes up long enough to send a telepathic distress call to Professor X, who sends the rest of the X-Men into the tunnels under New York to rescue their teammates. As Storm struggles with her claustrophobia, the rest of the X-Men battle the Morlocks. Eventually, Storm manages to pull herself together well enough to challenge Callisto to a duel for leadership of the Morlocks. The two women fight, with Storm eventually winning. The Morlocks reject Storm's offer to join the X-Men in the X-Mansion, and she leaves Callisto in charge again before leaving with her teammates, including Cyclops & Jean. Later, Cyclops & Jean go to Wolverine's room to thank him for his help, only to find him gone without explanation.