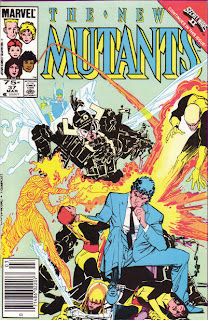 In a Nutshell
The Beyonder kills the New Mutants.

Plot
The New Mutants are watching an old Western as Dani talks with her mother on the phone. Suddenly, she sees an image of Death over each of her friends. Refusing to believe the omens, she runs from the mansion to the stables, and flies into the air aboard Brightwind. Concerned, Sam chases after her and convinces her to rejoin her friends, but she can't bring herself to tell him about her visions. In Manhattan, Roberto comes across a crane accident, and is able to lift it long enough for a trapped woman to get free. But when the crane slips from his grasp, only the timely arrival of She-Hulk prevents further disaster, much to Roberto's chagrin. Still unsure of where he belongs, he decides to visit his mother in Brazil. Back at the mansion, Sam and Dani land just as the Beyonder appears on the school grounds. 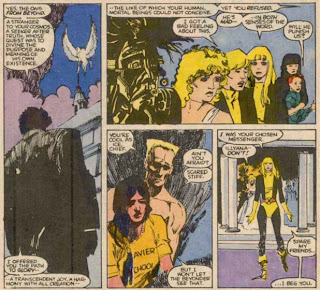 He admonishes the New Mutants for rejecting his offer of harmony, and when Illyana offers to sacrifice herself to spare her friends, he kills her. The rest of the New Mutants ferociously attack the Beyonder, seemingly killing him. But Dani suspects otherwise, and just then, the Beyonder rises, saying he's taken the best the New Mutants' had, and now its his turn. He proceeds to mercilessly and easily slaughter the entire team, and when he's done, he erases them from existence. Dani's parents in Colorado forget their daughter, Roberto in Manhattan his friends. Xavier's school disappears, and not even memories of the New Mutants remain.

Firsts and Other Notables
The New Mutants are all killed this issue by the Beyonder, who proceeds to wipe away all memory of their existence from the world, including Xavier's school. He will revive them, after a fashion, in Secret Wars II #9, but the ramifications of his attack in this issue will be dealt with in the next several issues. 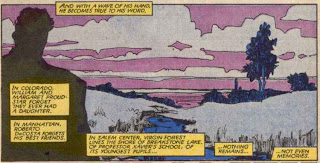 The one New Mutant to escape the Beyonder's attack is Roberto, who is still on leave from the team and in New York City when the Beyonder arrives at the school, and ultimately decides to visit his mother in Brazil. 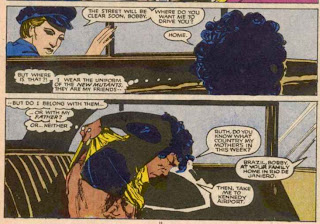 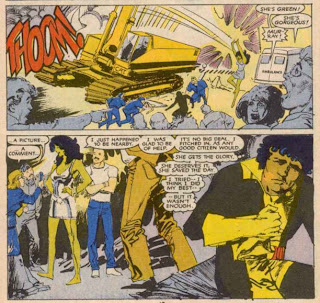 A Work in Progress
It is said that the X-Men are in San Fransisco (brought there by the Beyonder in Uncanny X-Men #202), leaving the New Mutants on their own.

In a rather clever bit, when Dani sees an image of death above each of her teammates shortly before the Beyonder arrives, each image varies based on the beliefs of the person. So Illyana's image is a demon, Catholic Karma's an angel, the (Nova) Roman Amara Pluto (depicted as he appears in the Marvel Universe), Warlock's his father, Magus, etc. 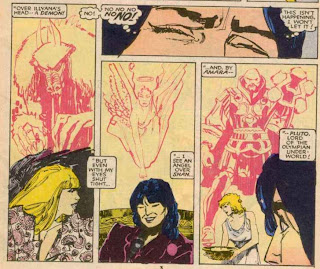 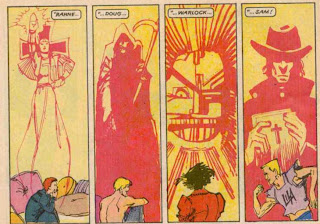 Sam mentions going home for Thanksgiving, something which makes the Christmas-time setting of Power Pack #20 (considered to occur before this issue) not quite fit.

I Love the 80s
As the issue opens, the New Mutants are watching an old John Wayne movie in which all the Native Americans are stereotypical villains, something that is not lost on Dani (who is instead talking to her mom) and upsets Rahne. Sam, to his credit, later apologizes to Dani for watching the movie. 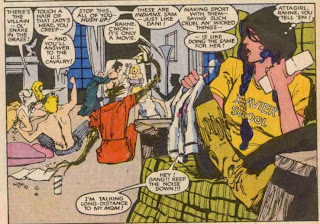 Human/Mutant Relations
Though Bobby is despondent that he needed She-Hulk's help to save the day and that she is cheered by the crowd where he was met with suspicion for being a mutant, a police officer he saved thanks him and tells him he doesn't care what everyone else says about mutants, Bobby is aces in his book. 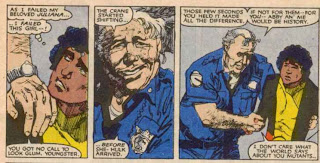 Teebore's Take
This issue, in and of itself, is largely an issue-long fight between the Beyonder and the New Mutants. We've seen this before, of course, but its a testament to the impact art can have on a comic book story when you compare this fight, drawn pseudo-realistically by Wilshire and Sienkiewicz with an appropriate sense of energy and gravity to the tight, bland, and rudimentary work of Al Milgrom in Secret Wars II #8. Moreover, the old "startling death of the main character(s)" trope is a trick almost as old as comic books themselves, but even though we're primed to expect the various deaths that fill these pages to be revealed as a dream, a hoax, an imaginary story or in some other way reversed, there's still power to those scenes.

That is, again, in part, because of how the art depicts them, but it's also because of the presence of the Beyonder himself, a character we know to have the power to both kill and revive the New Mutants on a whim. He is an almost literal deus ex machina, and thus, we're even more primed to worry less about the events of this story will ultimately be reversed (since this isn't the last issue of New Mutants, we know they will be, somehow) and are allowed to just appreciate those events for what they are, while also looking ahead to the possible aftermath instead of the mechanism of revival. From that aftermath Claremont will spin a complex tale (one that shrewdly takes advantage of the new status quo of the book), and while he has, for the most part, thus far done his best to keep Secret Wars II from interfering with his existing plans on either of the books he writes, this issue is the exception where he allows the crossover to make a significant impact, one that will, in the end, largely pay off.

Next Issue
Tomorrow, the band gets back together for X-Factor #1, and next week, Phoenix tries once again to deal with the Beyonder in Uncanny X-Men #203, followed by the aftermath of the New Mutants' death in New Mutants #38.
Newer Post Older Post Home
Posted by Austin Gorton at 10:00 AM