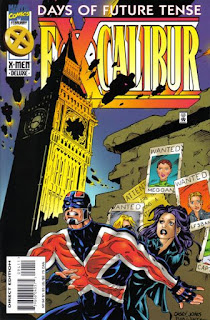 In a Nutshell
Captainb Britain experiences a grim vision of Excalibur's future.

Plot
In the year 2013, Britain is ruled by Black Air, operating as agents of the Sentinels who have taken over North America and decimated the mutant population. The remaining members of Excalibur, including Wolfsbane, Betsy Braddock, Tangerine, Karma, Captain Britain & Meggan, are given a mission by their leader, Pete Wisdom: their missing teammate Douglock has been traced to Blackwall, Black Air's London base, which Excalibur is going to infiltrate in order to rescue their friend. Later, they fight their way into the base, only to discover Douglock isn't just a captive of Black Air, he has been thoroughly dissected and transformed into the operating system of Blackwall, fueling the rise of Black Air. Just then, Black Air agents surround the team, signaling the end of Excalibur, and England, just as Brian Braddock wakes up in the present day, shocked by the events he dreamt, which he now realizes were visions of the near-future he witnessed while lost in the timestream.

Firsts and Other Notables
Obviously, this is a brief return to the world of "Days of Future Past" set roughly contemporaneous to the original story, suggesting Nightcrawler, Colossus & Kitty left Excalibur to return "home" where they were caught up in the events of the original story, thereby bridging the gap between their status in the original "Days" and their (later) role in Excalibur (all of which has since been rendered moot since this story was published since all the former X-Men went back to the team eventually anyway).

Presented as a memory of a timeline Brian experienced while lost in the timestream, the events of this issue will be obliquely referenced throughout the remainder of Warren Ellis' run on the book, as Excalibur works to protect Douglock and prevent the ascension to power of Black Air.

Tangerine, who is amongst the members of Excalibur here, debuted in the series' earlier "Days" sequel, "Days of Future Yet to Come", thereby setting this story before that one.

Psylocke is also on hand, and references an argument with Warren, suggesting she & Archangel remain an item well into the future. 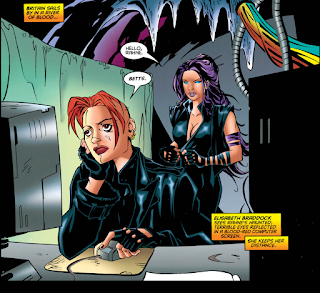 Captain Britain & Meggan are married in this timeline, which will happen in the "main" timeline in the series' final issue (they are still technically engaged at this point, something which doesn't get brought up much).

Karma is on hand in the future, serving as a member of the team and as Pete Wisdom's Gal Friday, the closest we ever get to the letter page teases from earlier issues about the long-stuck-in-character-limbo Karma joining the cast.

The cover is of course an homage to Uncanny X-Men #141 (though it gets the hair color wrong on a couple of the wanted posters).

A Work in Progress
As with the original "Days", the story is explicitly set is the far future of...2013.

There's a picture of the present day team in this issue that would frankly look good as a trading card shot of the group. 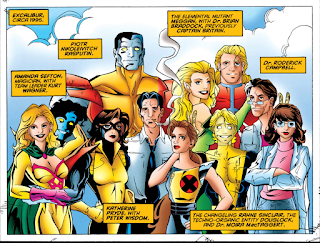 Presumably inspired by the gag in the previous issue, Future Wisdom is bald and in a wheelchair, making him resemble Professor X. 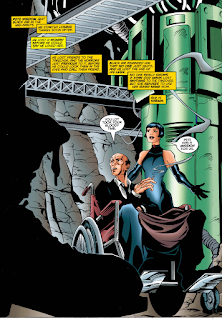 Austin's Analysis
Similar to how the original future-set "Days of Future Past" had an immediate impact on the subsequent present day X-Men stories by making explicit the price of failure for the X-Men, this issue effectively operates as a mission statement for the rest of Warren Ellis' run, with the majority of his overarching plotlines operating under the specter of events in this issue. Of course, "Days of Future Past" came to influence, however obliquely, years of stories (and, directly, at least two sequels/follow ups, to say nothing of former Excalibur member Rachel Summers), whereas this issue holds sway over a mere nine additional issues (and really, only one story arc which directly speaks to these events).

Even putting aside the relatively small shadow cast by the issue, it also doesn't help that it does very little unique or different with the now-standard future dystopia story beats, presenting the kind of darker, hardened versions of present day characters we've come to expect (the naive Rahne is now hard-edged, someone's been crippled in the intervening years, characters face mortal peril because they don't have to star in another issue next month, etc.). Casting the cynical (and still somewhat outsider-ish) Pete Wisdom in the Professor X role for the futuristic Excalibur is, maybe, a bit of a twist, but less of surprise given how obviously author-insert the character already is. Beyond that, this is mostly just standard dystopia style with very little substance, and while the focus, in terms of narrative & theme, it will lend to what has been a somewhat scattershot creative run thus far will eventually be appreciated, the attempts to piggyback off "Days of Future Past" just make it suffer by comparison more than anything.

Next Issue
Tomorrow, Cable meets Sugar Man in Cable #28. Next week, past Cable fights in the far future in Askani'son #1-4!