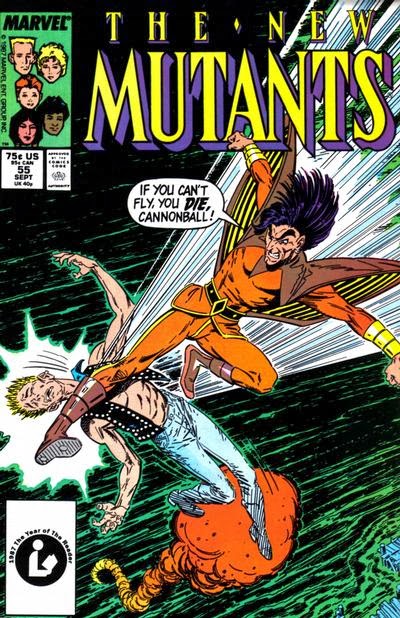 In a Nutshell
The New Mutants go to a party as Louise Simonson comes aboard.

Plot
As the New Mutants get ready for a party celebrating the launch of Lila Cheney's new album, Sam worries about fitting in with Lila's crowd, while Rahne is much more interested in investigating the mysterious bird boy being studied on Governors Island. When the New Mutants arrive at the party, they interrupt an exchange between Lila and an alien named Raek, with whom she had dealings in the past. As Lila and Sam reunite, Dani and Illyana rush off to dance while Rahne and Doug take in the party. Raek realizes that Sam will make it difficult for Raek to convince Lila to help him and his cohorts, so he plays off Sam's insecurities about fitting in with Lila's friends and offers him drugs, which he insists will help Sam fit in. 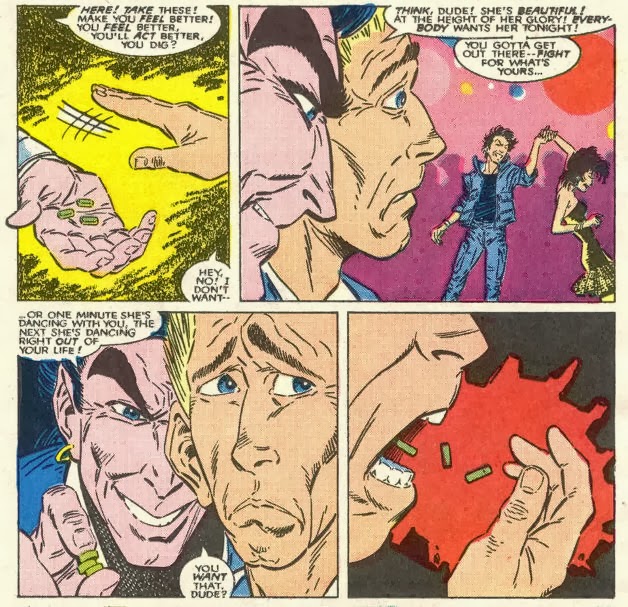 With Sam drugged, Raek and his allies fly off with him, but are seen doing so by Rahne and Doug. As they alert Dani and Illyana, Sam groggily tries to free himself, ultimately crashing. Illyana teleports the rest of the team to Sam's location, which turns out to be a garbage barge. They tussle with Raek and his crew, overpowering them just as Lila arrives. She explains that in her past she worked with Raek, and he wanted her help in stealing some jewels. Illyana sends Raek and his allies to Limbo as Lila heads back to the party. Sam realizes he never should have taken Raek's drugs, and hopes Lila never finds out.

Firsts and Other Notables
With this issue, Louise Simonson comes aboard as the new writer. Though she was initially only slated to fill-in for Claremont for a few months, she ends up staying on the title almost until its cancellation and transformation into X-Force (she'll leave the book shortly before then as Rob Liefeld gains more and more control over the direction of the book). Her run on the book is generally not well regarded amongst fans, and while the criticisms often leveled at it aren't entirely unfounded, as usual I tend to enjoy her run more than the zeitgeist. Like most runs, it has its highs and its lows, and even though the series' best days are behind it, there is still some decent material ahead.

Along with Simonson, Bret Blevins, who filled in on issue #49, debuts as the new series artist (though a different artist will pencil the next issue, so arguably Blevins run doesn't start in earnest until issue #57). He will remain the book's regular artist until Rob Liefeld comes aboard, though like Silvestri on Uncanny X-Men, his run, particularly towards the end, will be peppered with fill-in artists.

Terry Austin, who has inked the previous two issues of the series, stays on to ink Blevins, and will continue to do so through issue #66. Like Simonson's, Blevins' work on this title is generally derided by fans. I enjoy his early work but grow weary of it later on; I'll have to see how it plays out as I re-read this run, but I'm thinking the point at which my appreciation for Blevins' work wanes is when Terry Austin stops inking it.

This issue also features the first mention and a brief one-panel glimpse of Bird-Brain, the Jar Jar Binks of the X-Universe and the nadir of this series, one of a handful of characters who make it more difficult to defend Simonson's run on the title. More, unfortunately, on him in future issues. 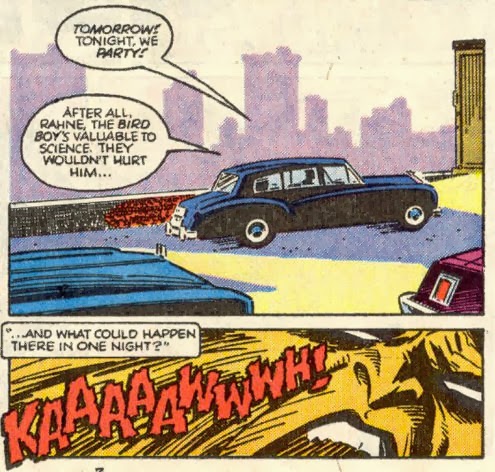 In another bit of eerie (yet likely unintentional at this point) foreshadowing, Doug once again saves a teammate (this time, Rahne, adding to the foreshadowing) only to get shot in the back as a result. 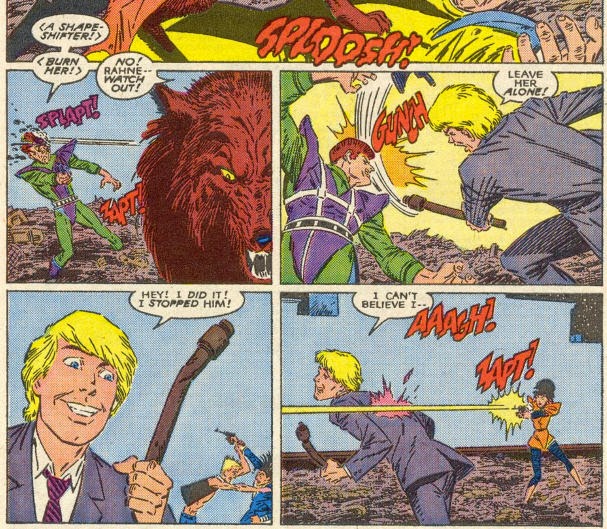 Magma is absent from this issue; next issue will reveal that she was suffering from the flu during the events of this story, though Simonson will shortly write her out of the book. Sunspot and Warlock are both absent as well (and their absences remarked upon in the story), as they are still off in Fallen Angels.

A Work in Progress
Magneto, addressing the New Mutants before they leave for Lila's party, gives them a curfew of 1 AM, something which they all object to, though a 1 AM curfew for a bunch of teenagers doesn't seem that unreasonable to me, and I don't think it would have when I was a teenager, either (then again, I *was* a goody-goody in high school...).

While Doug and Rahne are written more or less as themselves, Sam, Dani and Illyana exhibit some odd behavior in this issue. Sam stresses over what to wear to Lila's party (which is genuine enough but a little out-of-character for the usually-grounded and easy going Sam), Illyana is obsessed with clothes, and at one point Dani is a straight-up bitch to Rahne for interrupting her dancing at the party, a particularly sudden turn for the character given their close relationship. 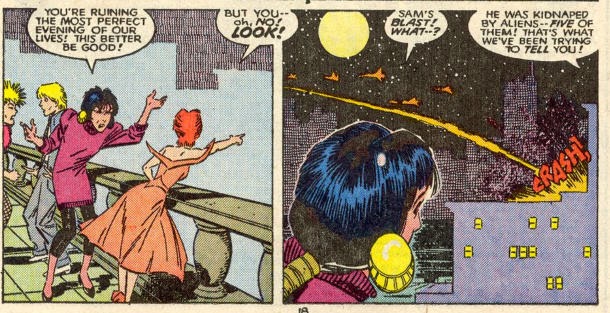 There's a neat visual depiction of Doug using his power as he eavesdrops on a group of aliens, with the words he can instantly understanding appearing in their word balloons while the alien terms he hasn't been able to figure out appearing as gibberish.

I Love the 80s
Illyana declares her look, later described as being punk, "fresh". 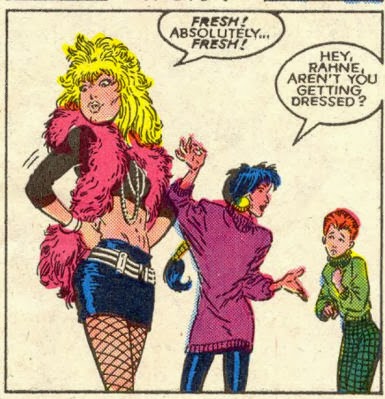 In one of the most blatant PSA moments yet (and most blatant bits of poor characterization), Sam is coerced into taking drugs in order to act cooler around Lila, then later regrets it, saying he doesn't need drugs to be cool. Like, those are the exact words he says, "She already thinks ah'm cool". I hope Weezie got a discount on that sledgehammer. 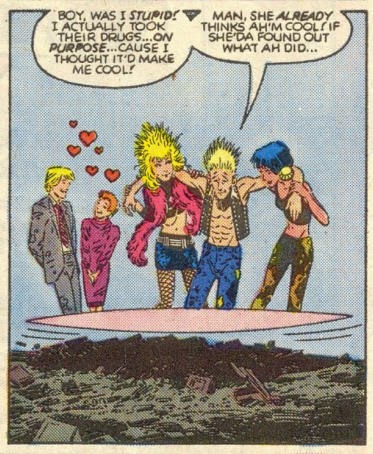 One of the aliens at Lila's party asks about that time on Alderaan. Presumably a different one, since the Alderaan we know blew up a long time ago. 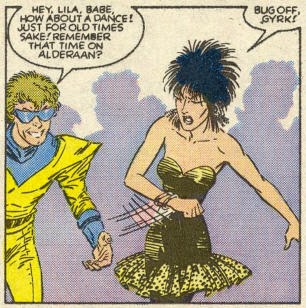 Young Love
This issue kicks off the Rahne/Doug romance, as they spend most of the party together and flirting.

Louise Simonson on being assigned New Mutants
"Ann Nocenti was the editor and she asked me to do a fill-in to help Chris [Claremont] catch up on his deadlines. I think Chris was also writing Excalibur at the time and I figured that once he caught up, that would be the end of it. Several issues later, Ann asked me to come on and do six months on New Mutants because Chris was completely buried. Ann wanted me to 'young' the characters up. She had been getting a lot of letters that said the characters were acting too old and too mature and she wanted them to be younger. I probably got put on the book because I did Power Pack, which featured younger kids. I thought I was just going to do six months' worth, but ended up doing some forty odd issues. I got on and never got off."

Teebore's Take
And thus begins the Louise Simonson era of New Mutants. It is not an auspicious start. Tasked by editorial with depicting the cast as younger, Simonson almost immediately corrects too far in the wrong direction (something she has often owned up to), not only making the characters act younger but snottier and whinier, and thus wildly out-of-character. Dani and Illyana are obsessed with clothes and boys (fine, they are teenage girls, but it does seem an odd beat for both of them), with Dani snapping at Rahne on several occasions (the one character with whom Dani is always the most sympathetic). Meanwhile, Sam throws a fit while picking out clothes then takes drugs to impress Lila in one the more hamfisted PSAs to appear in a comic that wasn't specifically created just to be a PSA. And, of course, we get our first mention of Bird-Brain.

It's not all bad though, as there are some genuinely effective character moments. Romantically pairing Doug and Rahne isn't a terrible idea, Sam worrying about fitting in with Lila's crowd is, sans the drug bit, a okay character beat, and a standalone story in which the New Mutants more or less stumble into an alien jewel heist while attending a party certainly fits the books "students first" aesthetic. The art, from new series penciller Bret Blevins, is a far cry from the more grounded art that has defined the series since Sienkiewicz's departure, but for better or worse, it fits the tone Simonson is going for here (and is aided, no doubt, by Terry Austin on inks). Simonson's first issue, then, isn't a complete wash, but there's no denying it's an immediate and stark change from the more measured approach of Claremont.

Next Issue
Tomorrow, Beast gets sick when Apocalypse unleashes his Horsemen in X-Factor #19. Next week, Mr. Sinister makes his debut in Uncanny X-Men #221, followed by the first full appearance of >shudder< Bird-Brain in New Mutants #56.
Newer Post Older Post Home
Posted by Austin Gorton at 11:00 AM