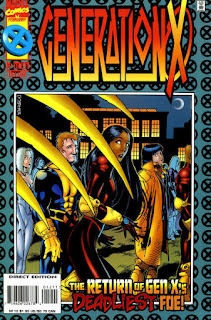 "The Return of Emplate"
February 1996

In a Nutshell
Emplate returns

Plot
Banshee brings the kids into Boston for a day of relaxation. While most everyone breaks off to do some shopping, Skin brings Chamber to a fancy restaurant where he's arranged to meet Gayle Edgerton, his ex-girlfriend. As Skin drops him off, he experiences a massive headache, then is grabbed from behind by an unseen foe. Meanwhile, Banshee confronts Monet about her catatonic spells, but she runs off, and Banshee is captured before he can follow. At the school, Emma probes Penance's mind, determined to learn her secrets, but the effort leaves her open to attack by Emplate. Back in the city, Jubilee, Husk, Mondo and Synch are having lunch when a purple gas rises out of a pot and knocks them all out before assuming a humanoid form. Elsewhere, Gayle arrives late to her lunch with Chamber and when Chamber apologizes for how he left her, she insists it's water under the bridge. But when he helps her move from her wheelchair to the table, she attacks him, draining him of his psionic energy. That night, Monet flies back to the school, but she finds her classmates and teachers all captives of Emplate and his associates, including Gayle. With Penance at his side, he greets Monet, welcoming his sister to the party!

Firsts and Other Notables
This issue reveals that Emplate is Monet's older brother, confirming a relationship between them (and further hinting at Penance's involvement with the pair due to her connection to Emplate). 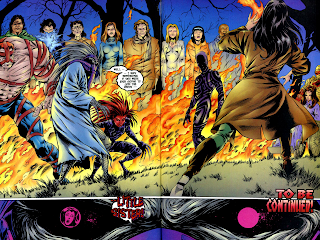 That Penance connection, while not directly addressed, is set up briefly (along with the fact that Monet has a brother ahead of the Emplate reveal) when Banshee confronts Monet about her catatonic spells, prompting her to run off when he asks about her family, revealing in the process that she has an older brother and twin younger sisters (who are, at this point in time, technically her, with the real Monet being Penance).

In addition to Chamber's ex-girlfriend Gayle (with whom Emplate has been associating since X-Men: Prime), his other allies include the mutants Bulwark, Murmur, and Vincente. The first two are making their first appearances, but the latter represents the main/616 version of the character who first appeared in Generation Next during "Age of Apocalypse" as part of the student body (he's the one who help Husk masquerade as Quietus, the Core's foreman), making him the second counterpart to a character who first debuted in "Age of Apocalypse" to appear (after Rex over in X-Man).

A Work in Progress
Emplate is shown sans armor/respirator for the first time. 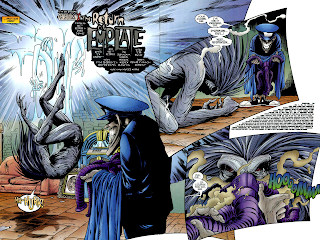 His cross-dimensional journeys are said to be taking an increased toll on him, something he attributes to the absence of Penance. 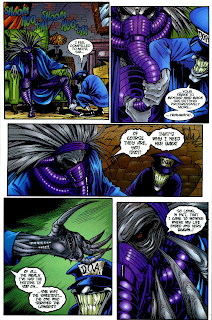 Skin experiences another migraine, which he attributes to the strain of holding his excess skin taut to create a “normal” appearance. 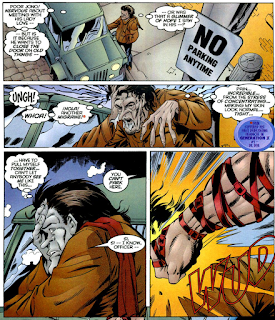 Mondo continues to do his “friendly, wise-beyond-his-years” routine. 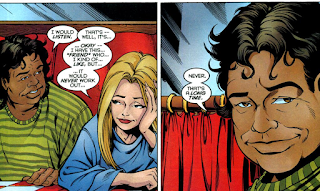 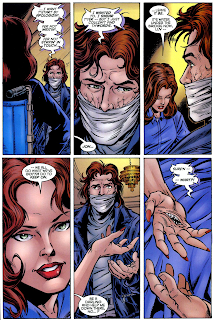 Young Love
Husk & Chamber are now in a full-on “Will they/Won’t They” scenario, with each unknowingly pining for the other across a series of panels. 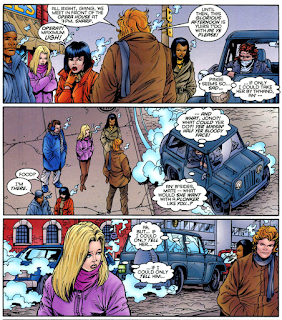 Austin's Analysis
This series has, to its credit, resisted the urge to present itself as a traditional superhero team book as much as possible in its first year of existence, largely sticking close to the idea that the Generation X kids are students first (and not explicitly training to become superhero combat operatives) and allowing the main characters to engage in the genre-required bits of superhero violence in fairly organic ways (ie no one is out looking for bank robbers or anything), especially for a series published in 1995. But bringing back the series' main (and arguably only) super-villain to mark the end of its first year of (main continuity) stories nevertheless makes a lot of sense, and even if the issue itself plays out a lot like X-Force #49 (in which members of the team are picked off one by one before being revealed as the captives of the Big Bad by issue's end), the more traditional plotting works here because of the confirmation of the relationship between Emplate and Monet, and the promise of further revelations involving what have been the central mysteries of the series thus far (Monet's catatonic spells/Penance's whole deal and how Emplate fits into all that). More than just a big superhero dust-up with the series' central antagonist, this issue kicks off a story that promises significant developments for and impacts on the book's characters, and in doing so, continues the series' focus on character even as it tells a more traditional superhero story.

Next Issue
Tomorrow, Warren Ellis puts his own spin on "Days of Future Past" in Excalibur #94. Friday. Cable's Genoshan adventure wraps up in Cable #28. Next week, we go back to the future with Askani'son #1-4!