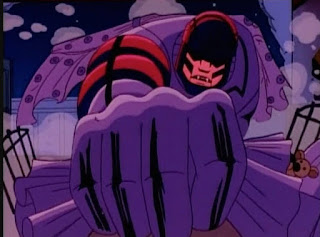 "Night of the Sentinels Part 1"

Plot
After young mutant Jubilee's foster father reports her to the Mutant Control Agency, a Sentinel attacks her house, intent on capturing her. Jubilee has, however, snuck out to the local mall. The Sentinel tracks her there, drawing the attention of fellow mutants Storm, Rogue, Gambit & Cyclops, who destroy the Sentinel and take the unconscious Jubilee back to their mansion home. There, she encounters Beast, Morph, Wolverine, Jean Grey & Professor Xavier, and learns the group is called the X-Men a team dedicated to mastering their powers and achieving peaceful coexistence with the humans who often fear & hate mutants. Learning the Sentinels are the product of the Mutant Control Agency, the X-Men infiltrate their headquarters in order to destroy their files on mutants, but the agency's security forces are, unknownst to the X-Men, lying in wait for them.