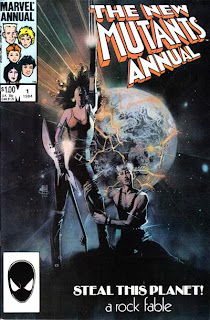 In a Nutshell
The first appearance of Lila Cheney

Plot
In the Danger Room, Professor X tests the upper limits of Sam's blasting power. As Sam struggles to raise a hydraulic ram, Xavier has Dani create a mental image of a Brood Queen, which frightens Sam and breaks his concentration, reinforcing the additional point of the test: to never let down his guard. Chagrined at his failure, Xavier tells him he'll do better next time. Later, Stevie Hunter is helping Dani with physical therapy when Roberto bursts into the room, brandishing tickets to the Lila Cheney concert. That Saturday, the New Mutants arrive at the concert early for the sound check. During the check, one of the speaker banks breaks, threatening to crush Lila. As Warlock and Sunspot shore up the speakers, Sam manages to push Lila to safety, earning her gratitude and affections. When Warlock discovers that the chains holding up the speakers were tampered with, Dani has Rahne shift into her wolf form. Rahne discovers an alien scent, and the New Mutants investigate. During the concert, they discover a large alien waiting to ambush Lila. A fight breaks out, and Sam is able to defeat the alien. But as the concert ends, Sam is caught in a massive blast of energy that encompasses Lila and her band, and they all disappear. 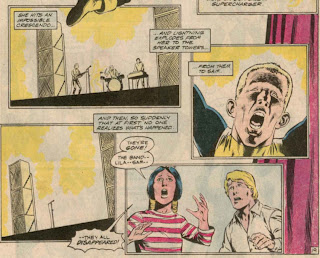 Warlock, having absorbed a fair amount of the energy, is able to power a stargate hidden in the speakers and transport the New Mutants after Lila and Sam, but they end up in the midst of outer space. Meanwhile, Sam arrives on Lila's home, a massive Dyson Sphere. Making her attraction to him clear, she sends him off with one of her band members for new clothes while she contacts an alien named Charasulla, from the same race as the one who tried to attack her, assuring him the theft of Earth, and subsequent sale of the planet to him, will go off as planned. In space, Dani awakens inside a starship that turns out to be Warlock. He doesn't have the energy to get them home, but can track Lila to her destination. On the Dyson Sphere, Lila enjoys Sam's company while one of her band members sends Charasulla the coordinates for Lila's Dyson Sphere, intending to double cross Lila and profit from the sale of Earth himself. The New Mutants arrive on the Dyson Sphere just as Charasulla's forces do. Most of the New Mutants are captured, but Illyana, Amara and Roberto are able to free their friends and defeat the aliens. Their celebration is short lived, however, as the device Lila intended to use to steal Earth, damaged during the battle, is now threatening to destroy it. Lila, who merely discovered the abandoned Dyson Sphere, doesn't know how to stop it, but Doug is able to decipher its language and shut it down. In payment, Lila agrees to leave Earth alone, and teleports the New Mutants back to Earth under her own power. Lila assures Sam that her feelings for him are genuine, and they agree to see one another again, much to Roberto's consternation.

Firsts and Other Notables
This issue is the first appearance of Lila Cheney, a mutant thief with the ability to teleport over interstellar distances, who headlines a popular rock band and takes an immediate liking to Sam. Also, she lives in a Dyson Sphere. She'll return in the capacity of Sam's semi-regular girlfriend off and on throughout the life of this series, eventually becoming a recurring supporting character and occasional X-Men ally throughout the X-universe. 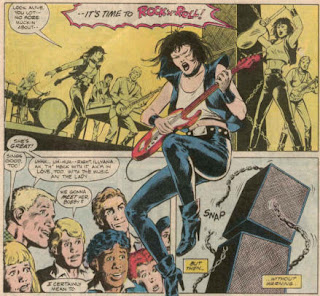 Her power in this issue is said to be specifically linked to places she identifies as home, be it her Dyson Sphere or London, though I believe later stories will make it such that she can teleport just about anywhere, but only over vast distances (so to go from London to America, she'd have to teleport to and then from her Dyson Sphere). Also, she mentions in this issue that her willingness to steal Earth and sell its people into slavery stems from the fact that Earth once "sold her"; to date, it's never been made clear exactly what she means by that.

While Bill Sienkiewicz provides the cover, series co-creator Bob McLeod returns to pencil the issue, inked by Tom Palmer. While McLeod's return following Sienkiewicz's debut would probably be more jarring on the regular title, it works pretty well as a fill-in for the annual (even though it never comes close to matching the energy of the cover), and as much as I like Sienkiewicz's work, it is nice to see the work of the other series' architect again (I particularly enjoyed Palmer's inks over McLeod's pencils).

The Chronology Corner
This issue was on sale at the same time as New Mutants #24 and Uncanny X-Men #189, but chronologically is considered to occur after issue #21. As a result, it is the first outing for new members Doug Ramsey and Warlock.

Also, Professor Xavier's appearance in this issue is considered to occur after Uncanny X-Men #184 and before #186.

A Work in Progress
Stevie Hunter is helping Dani with her physical therapy following her encounter with the Demon Bear. 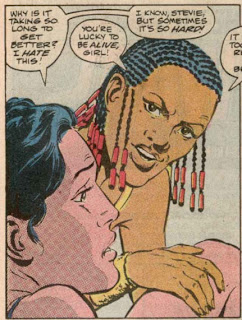 Warlock is described as being a metamorph, able to take any shape he chooses. At one point, he transforms into a spaceship able to carry all the New Mutants as passengers, the first of many times he becomes a vessel for his teammates.

He is also able to take a surprisingly-human form while out in public, a feat I don't believe he'll ever replicate quite so perfectly again. 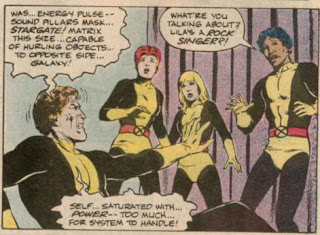 Doug is already doubting his place on the team, considering the cerebral nature of his power and his lack of combat training even relative to the other New Mutants. He does, however, get to save the day in the end thanks to his power. 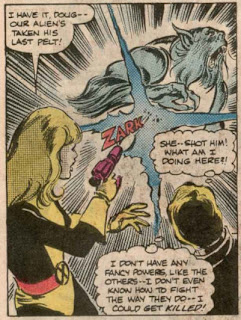 I Love the 80s
The crowd outside Lila's concert is about what you'd expect.

Dani spends most of this issue with a feather sticking out of her hair, because she's, you know, an American Indian.

Sci-fi nut Sam is blown away by Lila's Dyson Sphere, handily performing some exposition on the concept to the readers. 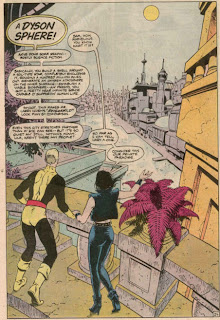 Claremontisms
Warlock is referred to as "Locke" throughout the issue, a nickname I don't believe ever stuck, but we'll have to see.

Young Love
After Roberto expresses jealousy that Lila seems to favor Sam, Sam asks him if he has to score with all the girls. 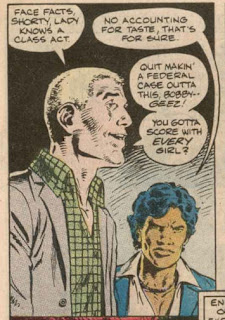 Lila takes an immediate liking to Sam after he saves her, and she later brings him to her home on the Dyson Sphere and dresses him in leather pseudo-bondage gear, though Sam isn't quite picking up on all the signals. 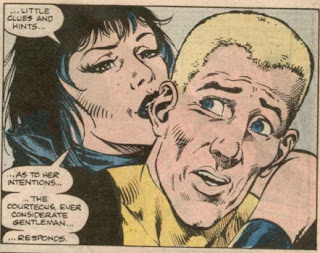 The issue ends with Sam and Lila agreeing to see one another again, and Lila ends up writing a love song entitled "Sam". 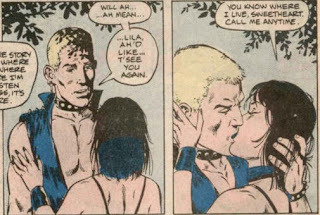 They're Students, Not Superheroes
Professor Xavier reminds Sam that he's not training the New Mutants to be X-Men. 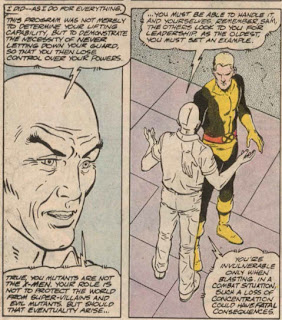 Teebore's Take
In many ways, this is an issue which presages the future of the title. Though Xavier makes a point of stressing that the New Mutants are not training to be X-Men early in the issue, the subsequent story finds them in their most fantastic, overtly comic book-y adventure yet. The Sentinels, though giant robots, are rooted in the conventions of the X-Men universe, while both Nova Roma and Limbo have their roots in more traditional pulp and fantasy tropes. But here, after introducing the alien Warlock in issue #21, Claremont goes full on sci-fi, pitting the New Mutants against a gang of aliens looking to use an extra-galactic Dyson Sphere to steal Earth. Sam even ends up with a new girlfriend in the process, but she is, of course, an interstellar teleporting rock star.

None of which on the surface is terribly bad (this issue on the whole is a fun romp, and I especially enjoy Doug getting to save the day even while Sam gets the girl). These characters have always worked well sliding into various genres, and it makes sense, especially given Claremont's propensity for the stuff, the presence of Warlock, and the shared affinity between comic books and science fiction, that Claremont would eventually drop the New Mutants into an explicitly sci-fi adventure. And their involvement in this story is still a far cry from them suiting up to protect the world from evil mutants; as with many of their adventures, they simply get sucked into it by being at the wrong place at the wrong time while trying to do otherwise normal teenager stuff. This is simply Claremont widening the world of the New Mutants, something any series needs to do to survive, but once released, it's difficult to put the genie back in the bottle, and this issue is one of the first rather large and obvious steps away from the "students first" aesthetic that has really defined the book thus far.

Next Issue
Next week brings us to Uncanny X-Men #187 as we catch-up with Forge and Storm, and New Mutants #22 sees the return of a plotline left dangling from another annual.
Newer Post Older Post Home
Posted by Austin Gorton at 10:30 AM