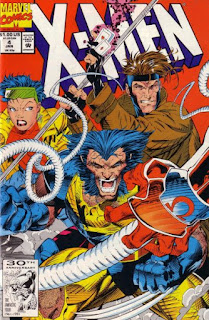 "The Resurrection and the Flesh"
January 1992

In a Nutshell
Omega Red attacks the X-Men.

Plot
On an island in the South Pacific, the Hand, overseen by Matsu'o Tsurayaba, resurrect Omega Red, sacrificing twenty-five lives to bring him out of his hibernation. At the X-Mansion, Gambit, Jubilee, Wolverine & Rogue play basketball while Moira grapples with the fallout of Magneto's death and the revelation of her previous manipulation of him. Feeling she's failed Xavier and the X-Men, she decides to leave the school. In Berlin, Matsu'o meets with Fenris, telling them the resurrection of Omega Red was successful. Back in New York, Gambit & Rogue leave to go on a date, accompanied by Beast, Wolverine & Jubilee. They are attacked along the way by the Hand, and manage to hold their own, until Omega Red enters the fray. His mutant death factor knocks out the rest of the team as he confronts Wolverine, who recognizes him as a man named Arkady. Later, the Hand, disguised as paramedics, load the unconscious X-Men into an ambulance. Moira approaches the scene in a cab, but distraught, refuses to even look at the scene, and tells the driver to keep going.

Firsts and Other Notables
After being teased in issue #2, this marks the first appearance of Omega Red, a Soviet era super-solider resurrected by the Hand. A mutant with a death factor (ie it draws life energy from other people, which is supposed to be a sort of reverse of Wolverine's healing factor), he was outfitted with carbonadium coils that emerge from his wrists (again, a la Wolverine's adamantium claws). Not surprisingly, he has a shared past with Wolverine, much of which will unfold in the course of the next several issues. Like other villains of this vintage, Omega Red will burn bright but fast, appearing in a handful of stories in the early 90s, including in non X-books, his profile boosted by appearances in the animated series, before quietly fading away into relative obscurity.

After shredding his orange-and-tan costume last month in Wolverine #49, this issue sees Wolverine back in his traditional yellow-and-blue costume. It is the first time he's appeared in an issue of X-Men wearing it since Uncanny #139, and it will remain his default look, with some periodic variations, until Grant Morrison & Frank Quitely eschew costumes entirely in their New X-Men run. Lee, a devotee of the Claremont/Byrne era, reportedly preferred this look for the character, and put him back in it the first chance he got. He was so happy that he crowed about it to John Byrne, who pointed out to Lee that it was Byrne himself who changed Wolverine out of it originally. 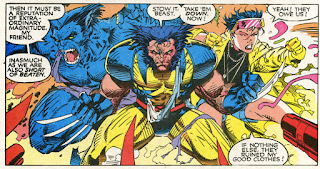 Jubilee pops up back up in this issue, with no explanation of her absence in the previous issues (nor what so upset her in X-Factor #70, when it seemed liked she was being told she was off the team). She's been appearing in Wolverine, however, so it's not like she's been totally absent of late. From this point forward, she's essentially a member of the Blue team.

Fenris, last seen striking an alliance with Matsu'o in Uncanny #268, returns this issue, and the Strucker twins are revealed to be part of the Upstarts competition as well (it's unclear if Matsu'o is as well, or if his presence is motivated solely by his partnership with the twins - it ultimately doesn't matter, because Fenris don't really get lumped in with the Upstarts outside of this story). Andrea mentions that the prize of the Upstarts competition is "no less than immortality itself", another vague revelation about this subplot that doesn't really go anywhere (over in Uncanny, it seemed like the competition was more about control of the Hellfire Club). 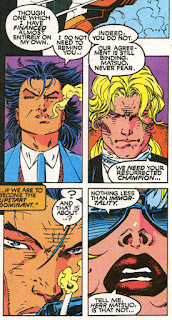 Moira, who's been staying at the X-Mansion since issue #1 (presumably because her Muir Island complex was mostly destroyed/damaged in the "Muir Island Saga", though that's never explicitly stated as the reason for her presence), departs this issue in despair over what she did to Magneto when he was a child in her care (and for helping him, however momentarily, brainwash the blue team). She won't appear again until "X-Cutioner's Song", and though he remains behind this issue, Banshee will soon depart as well.

Creator Central
Coming over from the same role on Uncanny, John Byrne takes over as scripter, with Jim Lee assuming sole plotting duties (along with his penciling responsibilities).

Collection Recollection
For whatever reason (probably either Omega Red's debut or the return of Wolverine's original costume) this issue took me longer to track down back in the day than the surrounding issues; as a result, I read this story just from issues #5-7 many, many more times than I did with #4.

A Work in Progress
Gambit, Rogue, Wolverine and Jubilee play a game of two-on-two basketball, a nice nod to the previous X-Men baseball games, though "X-Men playing basketball" never quite catches on as a recurring trope. 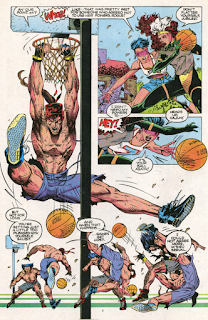 Banshee's jaw is wired shut this issue (not that we see any of the wires), a result of the injuries he suffered in the previous issue, prompting Xavier to telepathically assist him in communicating with Moira.

Beast uses one of Nightcrawler's old image inducers to tagalong with Gambit and Rogue, an odd act considering all the time he spent in public, undisguised, as both a member of X-Factor and the Avengers. 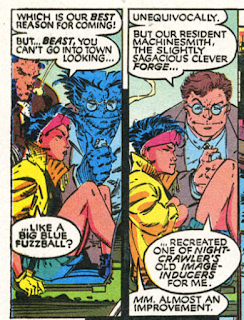 The Hand ninjas (at least some of them) are now much more cyberpunk (though not Portacio-level cyberpunk), with exposed faces and 90s guns in lieu of their usual hooded ninja garb. 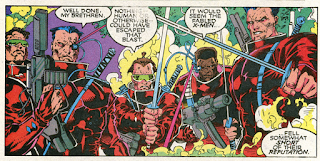 The Grim 'n' Gritty 90s
Germany is referred to as "newly unified".

Build Up Your Vocabulary with Beast: Capacious
/kəˈpāSHəs/. Adjective. Having a lot of space inside; roomy. 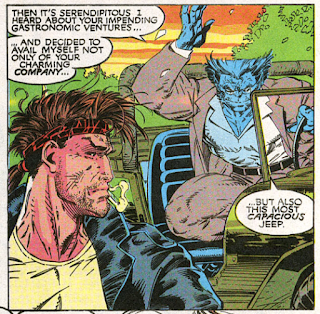 Artistic Achievements
Moira has a nightmare spurned on by her encounter with Magneto in the previous story, which gets depicted in a clever way by Lee - long vertical panels against a full page splash of Moira in profile. 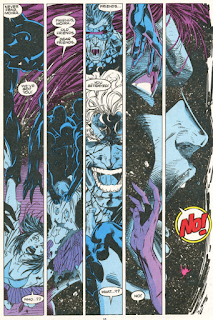 The Best There is at What He Does, Mon Ami
Rogue declares that natural agility is part of Gambit's power, the first time that's ever been explicitly stated. 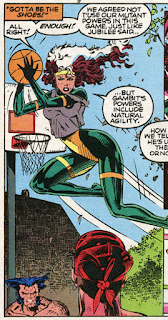 Young Love
Gambit tries to kiss Rogue, once again appearing nonchalant about the dangers of her powers, and stepping up their flirtatous relationship to the uncomfortable level of "not taking 'no' for an answer". 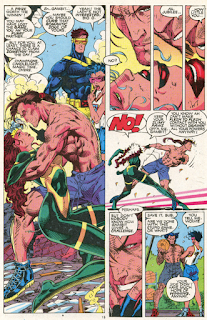 Later, Rogue agrees to go on a date with Gambit, but they are accompanied by Wolverine, Jubilee and Beast (and the whole thing gets scuttled by Omega Red and the Hand's attack).

It's in the Mail
The series gets a letter page this issue, titled "X-Pressions". This first two page installment includes letters raving about issue #1 and questioning the future of the series in Claremont's absence (his departure having become known prior to the launch of the series). A response to one letter says that Longshot and Dazzler will be turning up soon (they briefly appear next issue, then take center stage in the story that runs in issues #10 and #11), while another response confirms that Professor X had the mansion rebuilt between the "Muir Island Saga" and X-Men #1, in roughly a months' time.

Austin's Analysis
This isn't a Classic Claremont Quiet Issue - not the least because Claremont himself is gone, though that won't stop future instances of the type from appearing - but more of a setup issue for the Omega Red storyline. Nevertheless, it's the first issue since the linewide relaunch that has found either book pausing to take a breath, and it's appreciated for that. It's hard not to see "the X-Men play basketball" as an obvious pastiches/pander to Claremont's baseball games, but it works nonetheless: it not only  provides an easy window into characterization (Gambit is suave but also a little sleazy, Rogue can be cool-headed but is prone to bursts of temper, Wolverine is the seasoned veteran) but also presents the characters as people, capable of relaxing and goofing off. The later (attempted) group date, which more directly leads into main plot of the story, does a similar thing. Additionally, Moira dealing with the fallout of the revelations of the previous issues suggests, for the moment, that these stories don't exist in a vacuum, that for all the kewl new villains and flashy art, this is still a serial narrative, in which one story leads into the other, with threads lingering between them. Claremont may be gone and he may have been forced out ungraciously, but this issue, at least, serves as a reminder that someone was paying attention to what worked during his run, and attempting to replicate it, in however minor a fashion.

Next Issue
Tomorrow, Kylun comes to Earth in Excalibur #46, and Friday, Wolverine battles Shiva in Wolverine #50. Next week, Uncanny X-Men #285.