Game of Thrones 6x09: Battle of the Bastards 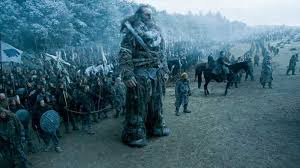 Meereen
The Slave Masters are still attacking Meereen for God knows what reason. Tyrion says it's because they can't let a slave-free nation succeed. Apparently Westeros doesn't count as a success? Anyway, Daenerys has a solution. It's to burn them. Burn them all!

Yes, Daenerys has dragons. Guess what they're good at? Burning things. Guess what they burn? The Slave Masters' ships. What did they think would happen? How did these guys become masters of anything other than stupidity?

The sea war is won by dragons (although some ships are spared to be absorbed by Daenerys's army). The land war is won by the Dothraki army coming in to save the Meereen guards. With the outcome in no doubt, the Slave Master's guards high tail it out of there because it's not like they like the Slave Masters. This leaves two of three Slave Masters to be executed and the final one is left to speak of what has happened.

Later, Yara and Theon show up. Daenerys considers their offer of ships in exchange for claim to the Iron Island. She asks why she shouldn't accept Eurons offer but Yara notifies her that Euron's "giant" cock is also part of the deal whereas Yara would only give Daenerys similar services if requested. Daenerys agrees to the deal while she and Yara continue to flirt and dream of matriarchy.


Winterfell
Jon Snow, with Sansa, Davos and Tormund, meet with Ramsay. And, for God's sake, why aren't archers posted to just take out Ramsay? Anyway, Jon Snow challenges Ramsay to a one-on-one duel but Ramsay isn't sure he'd beat Jon Snow whereas he's positive his much larger army could defeat Jon Snow's army. Jon Snow points out that Ramsay's army may not be as apt to fight for him since he's not willing to fight for them. That point ends up being meaningless.

In a war room, Jon Snow, Davos and Tormund discuss battle plans. Davos preaches patience. Let Ramsay's army come to them. Davos notes that Ramsay is a monster and monsters don't breed loyalty. If Jon Snow starts gaining the upper hand Ramsay's army might not want to keep fighting. That point ends up being meaningless.

After the meeting, Sansa reams out Jon Snow for not discussing anything with Sansa despite the fact that she knows Ramsay better than anyone else there. Which I agree with. Jon Snow concedes this point and asks Sansa what he should know. Sansa says Ramsay plays mind games so Jon Snow can't do what Ramsay wants. Jon Snow notes that telling someone not to do what the enemy wants them to do isn't very helpful. Which I agree with. Meanwhile, Davos goes for a walk and comes across Shireen's burnt, wooden stag.

It's game day and the two armies have taken their positions. Ramsay goes to the head of his army and, dear God, where are Jon Snow's archers when you need them!? Ramsay brings out Rickon and forces him to run towards Jon Snow. Ramsay starts shooting arrows towards Rickon while Rickon apparently went to the Meredith Vickers school of running. So, instead of zig-zagging, Rickon just runs straight towards Jon Snow's army. Jon Snow, stupidly runs out to meet Rickon. Rickon Stark gets plugged with an arrow just as Jon Snow is about to grab him.

Now remember when Sansa gave Jon Snow the incredibly obvious advice of not doing what Ramsay wants? Well it's pretty obvious Ramsay wants Jon Snow to lose his cool and rush him, right? So Jon Snow just needs not to fall into that trap. Easy peazy, right?

Naturally, Jon Snow loses his cool and runs out alone to attack Ramsay. Jon Snows' army soon follows him and we get a big battle. I'm not sure what there is to discuss. Ramsay orders his archers to fire into the battle despite his men being in there too. Davos refuses to do the same. That points ends up being meaningless.

Eventually a wall of dead bodies end up in front of Jon Snow's army so Ramsay's troops form a phalanx (wall of shields, I know a war term!) behind Jon Snow's army. Jon Snow and company are screwed but then, in true Game of Thrones fashion, Little Finger and the Vale's army show up (with Sansa) and takes out Ramsay's army.

Ramsay thinks it's time for the ole 23 skidoo and high tails it back to Winterfell. Ramsay declares himself safe within the Walls. But, do you know when a giant is allowed access to a fortified castle? Whenever he wants! Wun Wun busts down Winterfell's gate despite being pelted with arrows. He, Tormun and Jon Snow enter but Wun Wun is felled by an arrow to an eye thanks to Ramsay. Wun Wun dies and it's likely the most upset I've ever been by a Game of Thrones death. Then Jon Snow beats the crap out of Ramsay.

Sansa confronts the captured Ramsay. Ramsay seems to think Sansa doesn't have the guts to kill Ramsay. He also thinks his week-long starved, viscous hounds won't eat him. He ends up being wrong on both accounts.

Alright, where to start. First of all, how the battle of the bastards started and ended seems very much against the ethos of Game of Thrones. Game of Thrones is all about nihilism but that does not mean good guys always lose. It just means the universe doesn't care about your morality. You'll win if you're smarter or more powerful, period. (Well, a little randomness is always factored in.) Jon Snow was neither smarter nor more powerful but still won. Why?

Jon Snow did everything wrong in that battle. By all rights Jon Snow should've died when he charged head first into Ramsay's army. I would've much rathered Jon Snow be smart, not fall for Ramsay's game and play the patience game. They could've had Ramsay's numbers still beat Jon Snow's strategy only to have the Vale save them if they wanted. It would've made more sense and stayed with nihilism this show dedicates itself to. It also would've made Jon Snow not look like an idiot.

Secondly, this entire episode was setting up Ramsay's tyrannical rule to be his downfall. We start in Meereen where the Slave Masters' guards run away planting the seed that fear doesn't breed loyalty and given the chance soldiers would rather flee than fight for leaders who care nothing for them. Then we have Jon Snow tell Ramsay that his army might not respect him because Ramsay wouldn't fight for them one-on-one. Then we have Davos note that Ramsay's army might not stay loyal if the tides turn. Finally, we have Ramsay ordering arrows to be fired into the battleground that contained his own men whilst Davos actively avoids it. All of this amounted to nothing.

You could tell the same story they did but what if, when the Knights of the Vale show up, it's established that the two armies are now equal. However, Ramsay's army just surrenders because it's not worth engaging in an even fight for Ramsay. That would at least pay off the foreshadowing. Or else, you know, just don't foreshadow at all.

Why didn't Sansa tell Jon Snow of the possibility of the Vale army arriving?

Sansa is going to be forced to marry Littlefinger now, won't she?

Yara says that raping and pillaging is (now was) the Iron Island's way of life. How have they been allowed to exist for this long?

Sansa demands to know where Ramsay was taken to even though she was in Winterfell the entire time of Ramsay's capture. Shouldn't she have been able to keep track of him?

I believe that in the books Rickeon is like 4 or 5. Frankly, a lot about Rickon's death scene makes MUCH more sense if you think of him as a young child.

It is nice to see Game of Thrones break from the "just one setting" tradition for their climatic episode. I don't mind one setting but I like seeing that they don't hamstring themselves with it.

Tyrion's grudge against Theon's teasing of him in season one seems oddly disproportionate. I mean, I'd be pissed too but to hold on to it for this long after everything else that has happened? He's been teased by others before and gotten over it. Hell, he's said worse to Varys!

Seeing Yara, Theon, Tyrion and Daenerys commiserate on how bad their fathers were started to make me think about the nature of parents in Game of Thrones. One of the biggest overarching themes of Game of Thrones may be about parentage and learning from the mistakes of your parents. Specifically, Tyrion, Yara, Theon and Daenerys are resisting the faults of their parents and are better for it. The Stark children that are alive seem to have learned from their father's naivety and black and white morality. Robb didn't learn from his father's mistakes and look where it got him. Ramsay's dad was a monster and Ramsay doubled down on that fault. He betrayed his father and, in the end, got betrayed by his "children". A lot of people think succeeding in Game of Thrones is about power and amorality. Might means right, so-to-speak. But maybe, succeeding just means being better than your parents.

Daenerys: Lord Tyrion tells me your father was a terrible king.
Yara: You and I have that in common.

Tormund: I need a good drink to help me sleep the night before a fight. You want some? I have a jug of sour goat's milk stronger than any of that grape water you southern twats like sucking on.
Davos: No, thanks. It does sound delicious...

Daenerys: Has the Iron Islands ever had a queen before?
Yara: No more than Westeros.

Daenerys: And I imagine your offer is free of any marriage demands?
Yara: I never demand, but I'm up for anything really.