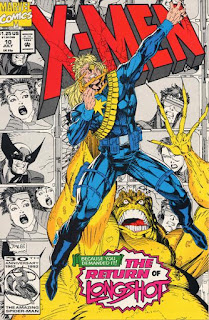 In a Nutshell
Longshot and the X-Men are captured by Mojo.

Plot
Longshot finds himself stuck in a Wizard of Oz parody, along with Cyclops, Rogue, Beast & Wolverine, as a captive Professor X and Mojo watch. Taunting the remaining captured X-Men, Mojo replays the events of their capture: after Dazzler fled to Earth for the X-Men's help, a double agent transported the team to Mojoworld. Weakened by the transport, they were quickly overpowered, though Dazzler managed to escape, at least until she encountered a brainwashed Longshot working as a guard. Surprised, she was blasted out of the citadel, seemingly to her death. With the replay over, Mojo sends Gambit, Jubilee, Psylocke & Lila Cheney into the Wizard of Oz program to attack their teammates. But outside, an unconscious Dazzler is found by a hooded figure, who declares she is their best chance at finally pulling the plug on Mojo TV.

Firsts and Other Notables
This is the start of Jim Lee's final story on the title, and the issue is split between two stories, with the Lee-penciled Longshot/Mojo main story shortened to twenty pages.

The back-up story, featuring art by future Wolverine penciler Mark Texiera, is touted as being the first solo Maverick story. The art is full bleed (meaning it goes all the way out to the edges of the page, without any kind of gutter or panel border), one of the more irritating trends of the 90s.

In the course of the story, we learn that some part of Maverick's real name is "North". The name Ryking, which will factor into issues #12 and #13, is also mentioned, as is the Xavier File (which Xavier was seen reading in an earlier issue and will factor into #12 & 13 as well). 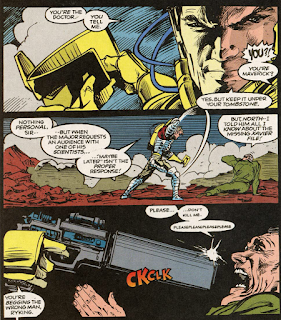 Maverick encoutners Warhawk, the Colossus-esque villain who attacked the X-Men in Uncanny X-Men #110, though he is unnamed in the story. 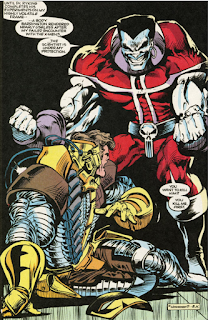 This issue is pretty terrible in terms of footnotes. Two separate footnotes incorrectly cite the earlier issues of this series which featured development of the Longshot/Dazzler/Mojo story, while another erroneously credits Dazzler's entry into the Siege Perilous as happening in Uncanny #252, rather than #251. Most egregiously (and infamously), a footnote in the back-up story referencing Warhawk's encounter with the X-Men simply says "Hmm" with a bunch of question marks. As a young reader, this drove me NUTS, as I had no idea where to go to even find out who this character was, let alone what his past with the X-Men was. Combine that with the fact that his encounter with the X-Men in Uncanny #110 was skipped in the Classic X-Men reprints (presumably because it doesn't feature Cockrum or Byrne on art) and there was no way to, you know, just Google "weird-ass Colossus-looking guy in that Maverick story", and I spent years wondering who the hell this guy was and wondering what issues I was missing, all because Bob Harras couldn't be arsed to do his job and look it up (or at least make someone else look it up).

Collection Recollection
In the heady days of the early 90s, before the bursting of the comic book and sports card bubbles, my moderately-sized suburban town was able to support three separate comic/card/collectible shops (not counting Shinders, the local newsstand/tobacco/books/cards/comics chain, which also had a store in the town next to mine). Of those three stores, this is the only issue I ever bought from one of them, Coins, Cards & Collectibles, which was the first to go down when the various markets it was targeting turned. Aside from its quicker demise, it's breadth of focus turned me against it; the other shops, with one focused more specifically on comics and the other on baseball cards, catered to my two interests more directly and in greater volume. There was little I could get at Coins, Cards & Collectibles that I couldn't get at the other two shops. Except, apparently, this issue. 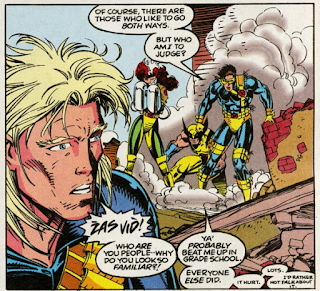 The events of "Shattershot" from the year's annuals are referenced briefly, as Mojo intends to use the ratings generated by Longshot and the X-Men to put down the pirate network once and for all.

In a legitimately funny bit, Jubilee asks why everyone says her name like it means "shut up". 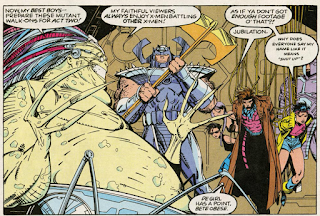 Wolverine, not incorrectly, complains about dealing with Mojo again, citing "The Crunch Conundrum" in his own series, though he technically wasn't in the Mojoverse in that story. 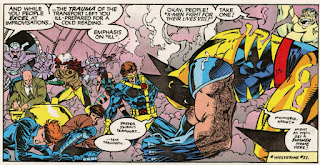 Dazzler says that her time fighting alongside Mojo has restored her memories lost in the Siege Perilous. an appreciated effort to tie up the Siege Perilous that could have easily been skipped over and just ignored (like the X-Men just no longer being invisible to electronic detection without explanation). 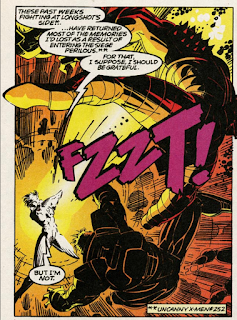 We get another look at Mojo II this issue, though the character still has yet to fully appear in a comic. 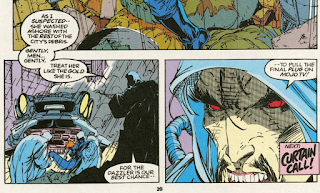 Austin's Analysis
The start of Jim Lee's last X-Men story, this is clearly something he's wanted to do for a while, having set it up in subplot pages over the previous handful of issues and even teasing it in the "coming attractions" insert in one of the X-Men #1 variants. And despite the somewhat mind-boggling prevalence of Mojo in this era (including this story, the year's annuals, and "The Crunch Conundrum" over in Wolverine), there is some novelty to this story being one of the few direct encounters between Mojo and the X-Men (usually, they're fighting his agents or getting turned into X-Babies or something). But for as much as Lee apparently wanted to do this story, there's no denying a sense that it's being phoned in.

His looming departure (which I believe was fairly common knowledge amongst fans by the time this issue hit the stands) contributes to that, as does the bevy of inkers on this issue and the Maverick back-up story. The in media res opening doesn't help, either, making it feel like an issue was missed between this one and the last, despite the story later filling in the details of the X-Men's capture by Mojo. That, combined with the shorter main story page count, makes the whole thing feel even more unformed and incomplete. There's no denying Longshot was due for a spotlight story, and kudos to Lee for wrapping up a plot he threaded earlier in his run before leaving the series. It would just be nice if the end result felt a little less tossed-off.

Next Issue
Tomorrow, Excalibur finally interacts with some actual X-Men, on page, in Excalibur #52. Friday, a painful goodbye in Wolverine #57. Next week, Morlock fun in Uncanny X-Men #291