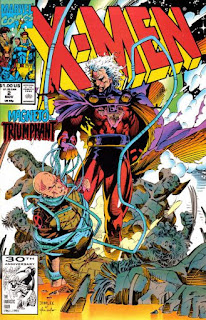 In a Nutshell
Magneto captures the Blue team, and learns that Moira altered his genetic structure as a child.

Plot
In Genosha, Magneto reiterates that the Acolytes are under his protection, then scatters the X-Men as the Genoshans attack him. Watching from the UN, the Soviet representative tells Nick Fury his country is deploying the Magneto Protocols, while at the X-Mansion, Professor X seeks out Moira. Back in Genosha, the X-Men are captured, and Magneto carries them back to Asteroid M, where Cortez informs him of an anomaly he discovered in Magneto's genetic scan. On Earth, Xavier finds Moira at the boathouse, and the pair are shortly thereafter joined by Magneto, who carries the structure into space. He forces Moira to admit that when he was an infant in her care, she tried to modify his genetic structure in order to reduce the apparent madness caused by using his powers. Outraged at this violation, Magneto forces Moira to do the same to the captured X-Men, bending them to his will. Meanwhile, on the Sakhalin Islands, Matsu'o Tsuryaba of the Hand acquires Omega Red from a Soviet general. At the X-Mansion, the Gold team, having learned of their teammates' apparent betrayal, practice fighting them, the Acolytes and Magneto in the Danger Room, to mounting losses. But their training is called short when Nick Fury reveals the extent of the Magneto Protocols: an orbital Russian plasma cannon designed to blow up Asteroid M. They need to move fast to save their friends, and despite the odds, Storm says they must at least try.

Firsts and Other Notables
Continuing last issue's embrace of X-history, this issue dives even deeper, not only referencing the events of Defenders #16 (the fairly laughable story in which Magneto is reduced to infancy by his own creation, Mutant Alpha) but using it as a significant plot point for the story. Long before I ever read that Defenders issue itself, I was aware of these events thanks to the references in this story, which combined with the Classic X-Men reprint of X-Men #104 (in which Magneto is restored to adulthood by Erik the Red, also referenced here, another fairly deep historical cut) made me feel, as a young, inexperienced reader, like I had a pretty good handle on this particular arc of Magneto's character. 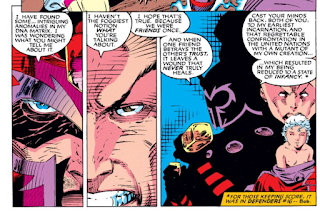 The Defenders reference is used to suggest a retcon to Magneto's development through the years under Claremont, suggesting that his swerve towards Xavier's path was motivated by tinkering to his genetic structure done by Moira while an infant in her care, this creating a clear line of demarcation between "looney Silver Age Magneto" and the more measured and nuanced Claremontian Magneto. Outraged, Magneto in turn forces Moira to use this process to brainwash the Blue team into serving him, setting up the big Blue vs. Gold battle for next issue. But next issue will also rollback this retcon, revealing that while Moira TRIED to alter Magneto, but the change didn't take, because the more a subject uses their power, the faster the alterations are undone, thus leaving Magneto's development as an act of character and not manipulation on Moira's part. 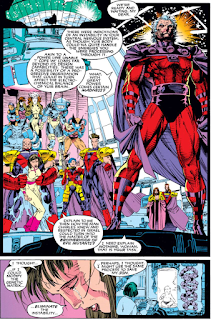 In a brief subplot scene setting up the series' next story arc, Omega Red is mentioned for the first time, as Matsu'o Tsuryaba (who orchestrated Psylocke's transformation into Asian Ninja Psylocke) and the Hand retrieve a mysterious coffin-like object from a Soviet general. 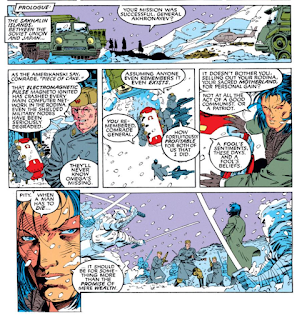 Xavier's X-branded jumpsuit debuts this issue, which becomes his default uniform for the foreseeable future, when he's doing field work or otherwise not wearing some kind of suit or civilian clothes.

Though last issue seemed to suggest that Cortez has some kind of healing-based power, this issue shows that he actually has the ability to supercharge other people's powers. Rather than an inconsistency, this becomes a plot point next issue. 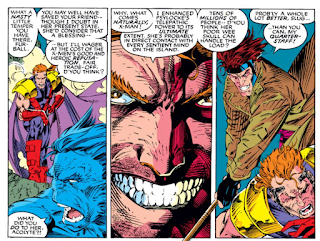 The new series gets its corner cover box this issue, and like X-Factor's it's more of an action shot than the traditional floating heads.

A Work in Progress
This issue reveals that the events we (the readers) know as "X-Tinction Agenda" are also known as such by the characters in-universe. On the one hand, that's kind of cute, and nicely simplistic. On the other hand "X-Tinction Agenda" is such a marketing term (like, why wouldn't the codename be Extinction Agenda? Why does SHIELD need to highlight the "X" in their codename) that it doesn't really make sense.

The Magneto Protocols referenced last issue are revealed to involve the Soviets launching an experimental plasma cannon into space to blast Asteroid M, the repercussions of which are frightening enough to motivate Nick Fury to give the remaining X-Men a heads up in order to effect a different solution before the Russians can fire it. 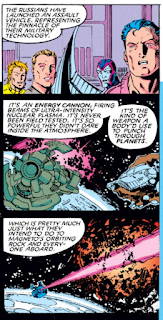 The Reference Section
Forge takes a cheap shot at the oft-losing Mets, though I'm not sure if they were in the midst of particularly rough stretch at this point in time, or if Claremont was just referencing their general malaise as a franchise.

Claremontisms
Twice in two pages two different characters say "a body" in reference to themselves.

Artistic Achievements
Jim Lee once again draws Banshee buttoning the high collar of his uniform, something I always appreciate. 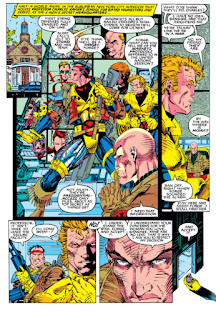 To the EXTREME!
A brainwashed Cyclops specifically references Cable and X-Force to Xavier as an example to follow in these modern times, suggesting at least that the X-Men are now aware of the New Mutants' transformation into X-Force and their new overall attitude.

Austin's Analysis
As much as he loomed large over the previous issue, this one is all about Magneto: how the world is responding to his recent, more villainous actions, how his current behavior compares to his previous time with the X-Men, how that previous behavior may have been influenced by Moira. The latter is actually a rather fascinating pseudo-retcon (pseudo because next issue will roll it back): providing an in-universe explanation for the change in Magneto's behavior as Claremont transitioned him from a raving, one-dimensional loon to one of the most nuanced characters in comics. It arguably undercuts the work Claremont did (making it less that Magneto grew on his own and more that an outside force was responsible), and I'd bet good money that if Claremont himself wasn't writing this issue, the idea may have stuck, but it's nevertheless an interesting idea.

Magneto looms so large over this issue that the X-Men are largely objects in their own book: everything they do is in reaction to him, before being brainwashed into joining him (Wolverine, well-entrenched as the franchise's bread-and-butter at this point, curiously enough, doesn't have a single line throughout the entire second issue of a high-profile relaunch, and is captured along withe Cyclops off-panel). Which isn't to say that's a bad thing. Just that by the second issue of the story, with all the relaunch business handled in the previous one, it's becoming clear that Claremont intends for this story, his X-Men swansong, to serve as his final word on Magneto, the character who most represents the development he put into the series over his fifteen year run.