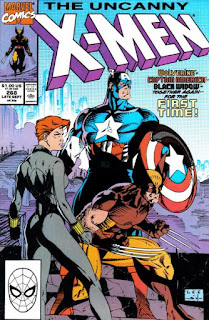 In a Nutshell
Wolverine battles the Hand in the past & the present, alongside Captain America & Black Widow.

Plot
In 1941 Madripoor, Captain America rescues a Russian man from a group of Hand ninjas, but needs help in turn from Logan, who is hunting the Hand himself. In the present, Black Widow is attacked by the Hand, but is rescued by Wolverine, Psylocke and Jubilee. In 1941, Logan has a drink with Captain America and Ivan, the Russian, at Seraph's Place, briefly running afoul of Baron Von Strucker, who is also in the city. Logan tells them that any enemy of the Hand is a friend of his, while Ivan explains that Strucker and the Hand seem to be in league together, and have kidnapped a young girl in Ivan's charge: Natasha Romanoff. In the present, the adult Natasha tells Wolverine that she is in Madripoor due to rumors of an alliance between Strucker's children, Fenris, and Matsu'o Tsurayaba, leader of the Hand. In 1941, Logan attacks the car carrying Natasha, seemingly dying in the process, but leaving Natasha to be rescued by Captain America and Ivan. 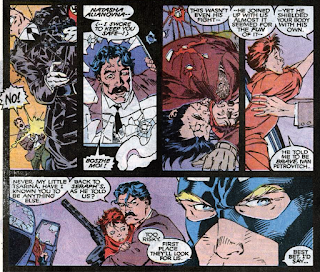 They head to the American Consulate, but are betrayed by the consul, who is in league with the Nazis. In the present, Black Widow and Wolverine learn the location of the Strucker/Matsu'o meet. In 1941, the Hand begin a ceremony to transform young Natasha into their Master Assassin. In the present, Psylocke, Black Widow and Jubilee infiltrate the yacht where the meet is being held. As Jubilee disables the engines, Wolverine comes aboard and helps take out the guards. In 1941, a still-alive Logan interrupts the ceremony, freeing Captain America & Ivan. Together, the three attack the Hand ninjas and Nazi troops. Later, Logan helps Captain America, Ivan & Natasha board a plane bound for Russia, with Cap and Logan parting as friends. In the present, Black Widow is furious to learn the Fenris and Matsu'o they captured are ringers, the real deal having expected their attack. Watching from afar, the villains toast their victory, the first of many.

Firsts and Other Notables
This story depicts the first chronological meeting between Captain America and Wolverine, a bit of history that I believe has mostly held up, though it's unclear if/when Captain America learned that the Logan with whom he teamed up in this story is also the X-Men's Wolverine and his future Avengers' teammate. 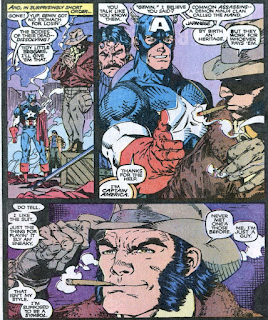 In addition to Captain America in the past, this issue also guest stars Black Widow, as both a child in 1941 and in her costumed identity in the present. A former Russian spy turned SHIELD agent, Avenger and occasional partner of Daredevil, she is in Madripoor at the request of Nick Fury, checking on reports that Fenris is meeting with Matsu'o Tsurayaba and the Hand. Her retarded aging in a result of enhancements she received from the Soviet Union as part of her post-war training in the Black Widow program. 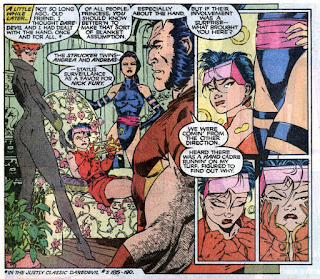 Her guardian in this issue, Ivan Petrovich, who teams up with Wolverine and Captain America to rescue young Natasha in 1941, first appeared in Black Widow's solo Amazing Adventures stories in the 70s. He was introduced as her middle-aged chauffeur and confidant, but was eventually revealed to have raised her after being entrusted with her care by Natasha's mother shortly before her death during the Battle of Stalingrad, though later stories have established that Ivan was working with the Black Widow program and that Natasha had already begun their training/receiving their enhancements at the time of this story.

To wit, this issue also establishes that an alliance has been formed between Matsu'o and the Strucker twins, the beginnings of what will become the Upstarts plotline, involving a group of new and second generation villains competing with each other to kill mutants in pursuit of a vague goal (it will lead to, amongst other things, the deaths of the Hellions and the first appearance of Omega Red). Somewhat infamously, the plotline, which is generally considered a brainchild of Lee, gets mostly mangled in the wake of the Image Exodus and wrapped up by later writers fairly perfunctorily and in a manner completely different, presumably, from whatever Lee had in mind.

Nazi leader and future head of Hydra, Baron Von Strucker (whom a young Magneto and Professor X will battle post-World War II, as seen in issue #161) pops up in the 1941-set story.

This issue is the first appearance of Seraph, a diminutive women who's revealed to have been the owner of the Princess Bar in 1941 (co-owned by Wolverine in the present day, as seen in his solo series), which was then called Seraph's Place. She'll pop up again much later in Wolverine as well as Wolverine: Origins, where she gets tied in with all that Romulus nonsense. 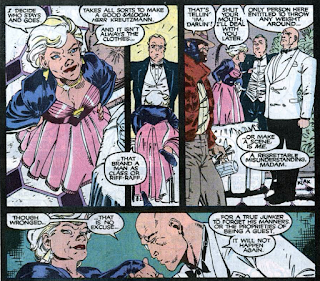 Like the first appearance of Gambit, this is another issue from this era that commanded high prices on the back issue market during the early 90s speculator boom (and, relatively speaking, still does today), presumably due it being a more proper start to Jim Lee's run as well as the bit of Wolverine/Captain America history it establishes.

It was also selected by Claremont to appear in his Marvel Visionaries hardcover collection.

A Work in Progress
Jubilee notes that all of Wolverine's old friends seem to be gorgeous babes, a comment which hangs a lampshade on the propensity of attractive women populating comics, as well as continuing the minor character subplot involving Jubilee dealing with the fact that she's not (yet) drawn like one of those women. 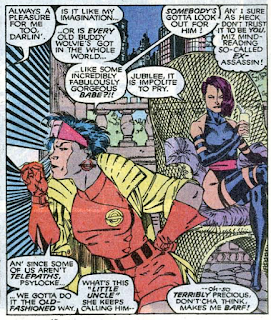 The Best There is at What He Does
This issue is a significant entry in the field of "heretofore unknown old friends of Wolverine's turn up", though Captain America and Black Widow are far more notable characters than the usual likes that populate that field.

1941 Wolverine doesn't use his claws, of course (later stories will reveal he did have bone claws at the time, but wasn't aware of them himself). 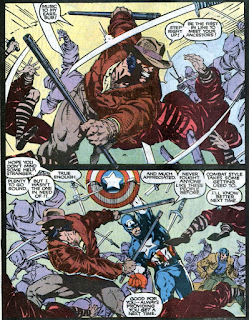 Claremontisms
When told the Hand won't give up without a fight, Wolverine responds, their choice, their funeral. 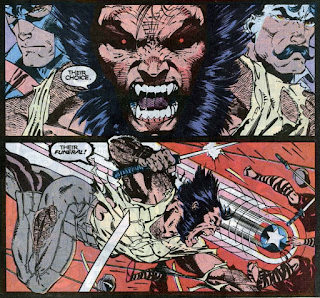 Artistic Achievements
The Captain America image on the opening page of this issue (which is not unlike the Wolverine figure on the cover of Wolverine #27) is another iconic Lee image that will get used in licensing and whatnot. 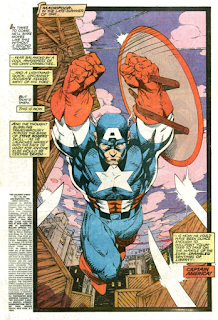 As with Silvestri, Lee brings some cheesecake/gratuitous T&A back to the book, first in his depiction of what Black Widow wears underneath her uniform (and how she sits in bed while talking to Wolverine). 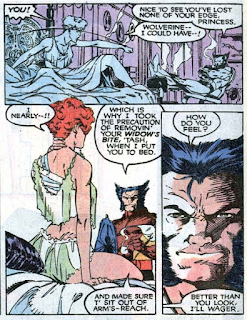 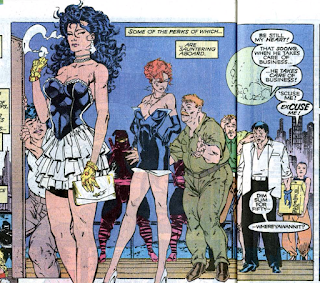 Teebore's Take
In a run of issues filled with notable first appearances, artistic debuts, and significant storylines, this issue is perhaps the most celebrated, commanding back issue prices for a long time almost on par with Gambit's first appearance. Yet oddly enough, in terms of the things that usually drive those prices, this issue isn't all that significant. In practice, it's essentially the debut of the Jim Lee/Scott Williams art team, as they provide the art unencumbered by any studio help, but technically, the previous issue marks Lee's debut as regular penciler. This issue does brings back the Wolverine/Psylocke/Jubilee trio for the first time since issue #261, but this isn't the first time Lee's drawn any of those characters (in fact, this issue reads like it could pick up immediately after the Lee-drawn story in issue #258, making the events of #261 more superfluous than ever). And while its depiction of the first meeting between Wolverine and Captain America is a neat bit of history, it's not something that likely drove speculators wild (especially in the 90s, when Cap was considered anything but kewl).

Ultimately, and this is a rare thing for the speculator boom of the early 90s, this issue might just be celebrated because, on top of all those things, it's also just really good. Though it builds on what's come before and leads into some future developments, it's essentially a done-in-one, one of the series' best such examples, which manages to tell not one but two stories, each set in a different time period, effortlessly handing the narrative back and forth between the two eras. The presence of Psylocke and Jubilee in the present aside, it's definitely more of a Wolverine story than an X-Men story, but as such, it would work as a great introduction to the character for a first time reader, and it's impressive how Claremont manages to tell two complete, mostly satisfying, tales in the space of one regular-sized issue.

Lee, meanwhile, dives right into things, showing off his skills at depicting intense action and iconic figures (such as the opening splash of Captain America). There's a bit of the shameless T&A that will come to characterize a lot of the early Image material, but nothing more egregious than when Silvestri was the regular artist, and Lee also shows an ability to utilize body language for characterization (with Jubilee basically providing a silent running commentary throughout the present day-set story), a skill that requires a level of subtlety lost on someone like Liefeld.

Whether last issue or this one is considered the start of Lee's regular run on the series, this regardless represents a bold artistic statement on the part of both creators, a declaration of the kind of neo-classical, high-adventure material Lee, thanks to his tremendous popularity, will force Claremont to bring back to the book during their brief tenure together. It's a push-and-pull that, like all great collaborations, will bring out the best in each contributor. This issue succeeds then, as both a well-crafted standalone pulpy adventure story, and as the start of the last great collaboration between a notable artist and Chris Claremont on the series. No wonder it remains such a popular and well-regarded issue.

Next Issue
Tomorrow, the Nth Man guest stars in Excalibur #27. Friday, "The Lazarus Project" mercifully comes to an end in Wolverine #30. Next week, Excalibur #28.