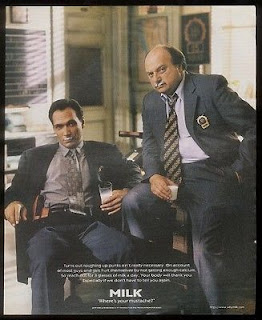 By 1997, NYPD Blue had been a solid hit for four years, leaving Steven Bochco and David Milch as in-demand TV producers, with offers coming in from every network.  Fall 1997 saw the debut of two new Milch/Bochco co-creations, Total Security on ABC and Brooklyn South on CBS.  Total Security didn’t even air the contracted thirteen episodes, and died a quiet death on Saturday evening television.  I have only a vague idea of what the show was supposed to be about, and I doubt there’s anywhere online where you can watch the series.  The opening credits are on Youtube, however, and boy does this show look horrific.  (It did feature Dexter’s dad, though.)

The other series didn’t fare much better, but Brooklyn South did manage to run for a full season on CBS.  I’ll have more on that one later, but it’s significant now to note that Milch seemed as invested in Brooklyn South as he was in Blue.  Given that there are only so many hours in a day, something had to give.  The result is the weakest season of Blue so far, one with too many stories that had little or no payoff.

What Was The Point of THAT?
Three main candidates for that category this year… 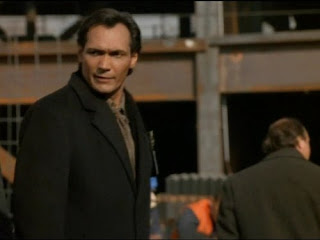 Season Highlights
Griping about the aimlessness of the season is fun, but I don’t want to leave the impression that the show is suddenly terrible.  Even if this is the year the show transforms into a procedural, that doesn’t mean it’s bad TV.  The characters are still entertaining, the policework is occasionally clever, and you rarely leave an episode feeling as if your time has been wasted.  It’s not as sharp as it used to be, but it’s still a competently executed drama with a solid cast.

Two of the best episodes from this era of the show are the “Lost Israel” two-parter, written by David Milch and Ted Mann, which feature a homeless man falsely accused of murder who only communicates by pointing to Bible verses.  Not only do you see the detectives legitimately flummoxed by a case this time, but the rigid structure of the show is abandoned to allow the story to play out over two episodes and several days.  And if you’ve seen David Milch’s speeches online, you’d know that some of the most disturbing aspects of this case come from his own childhood.

“A Box of Wendy” is another classic episode from this year, featuring a suspect who’s murdered his sister and hidden her inside a wooden box he’s crafted.  He’s such a great craftsman, though, that everyone who sees this box wants to take it home, which leads to the body being discovered.  Later, after being continually frustrated by the detectives’ refusal to give him a real Coca-Cola, not Sprite, he declares that he’ll confess in exchange for a full two-liter bottle.  Both this story and the idea of a mute homeless man who uses the Bible to communicate seem rather absurd for a show grounded in reality, but the execution in both episodes is hard to criticize.  Also, I can’t find any confirmation for this now, but I’m almost positive I’ve read before that both incidents were inspired by real cases brought to the show by Bill Clark. 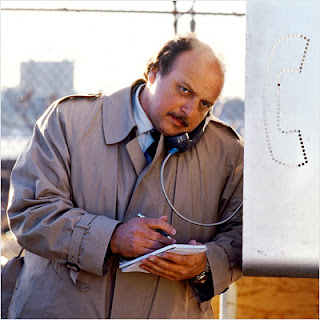 Season Lowlights
I can’t single out a specific episode as being a lowlight, but I do have to mention just how dramatic situations can suddenly become this year.  For instance, as good as “Lost Israel” is, there’s a lot of ugly-face, snot flying everywhere crying and screaming scenes that are hard to watch.  Later in the year, the detectives also become weirdly emotional in a few scenes, like when Bobby breaks down in tears after a heroin-addicted mother eagerly rats out her two sons.  In any other episode, Bobby would be happy to have a mother ready to turn in her kids after a crime -- we’ve seen Bobby himself go out of his way to talk moms into ratting out their kids in the past.  Now it gets him all weepy?  There’s also a melodramatic scene that has Sipowicz practically having a mental breakdown after a child molester suggests that Sipowicz receives a similar sick joy by beating suspects.  I can’t imagine Sipowicz as we know him really caring either way what a skell thinks about him.

In terms of sheer irritation, nothing got to me more than the season finale, which turns into a non-paid commercial for Viagra in more than one scene.  The exchange between Sipowicz and Dr. Mondzac, which has them slowly spelling out what Viagra is (“You mean it’s a pill?”), is bad enough, but the predictable Viagra jokes, which were everywhere in 1998, are just painful to watch. 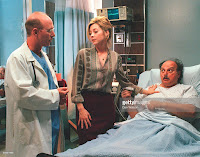 I Love the '90s
Det. Martinez debuts a new Caesar cut in the season premiere, which everyone in the cast feels a need to comment on during one scene.  It’s gone by the end of the year, thankfully, but it is a rare occurrence of a male actor on the show displaying a trendy haircut.  Jimmy Smits also enters the season with a very short haircut; it doesn’t last, but he never grows it out as long as the half-mullet he previously sported.

Hey, Isn't That...?
“Prostrate Before the Law” brings us a young Michael Cudliz (Abraham from The Walking Dead) as a member of an anti-government militia.  Cudliz’s xenophobic character irritates Bobby so much, he ends up blurting his entire backstory out to him, revealing information the audience has never discovered.  We also have Terrence Howard (credited as “Terrence Dashon Howard”) in the episode “Hammer Time” (a reference to a crack-addicted couple killing a baby with a hammer) in an extremely tiny role.  He’s likely the only actor later nominated for an Oscar who appears in a bit part, unless Amy Adams is an episode and I forgot.  (Oh wait, Jonah Hill has a very small role later on, so small he doesn’t receive an Act 1 credit, and there’s Paul Giamatti who’s briefly in the 1994 episode “You Bet Your Life” as “Man in Sleeping Bag.”)

Next time…I scour the internet for bootleg VHS copies of Total Security.  Or, more likely, I’ll watch Brooklyn South episodes on Youtube.  Well, I was going to, but they’ve just been deleted...