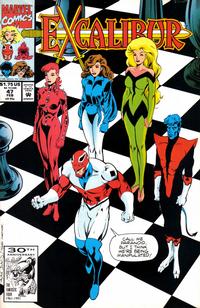 In a Nutshell
The first appearance of Cerise

Plot
At Excalibur's lighthouse, the bug-eyed alien removes its helmet, revealing a humanoid woman who introduces herself as Cerise. In Otherworld, an older member of the corps who claims to have known Brian's father points out how Roma manipulated the formation of Excalibur, prompting Brian to seek her out, something the disguised Corps member wanted. On Earth, Cerise is explaining that she is an adventurer who was thrown off course before landing at the lighthouse when another group of aliens arrives outside the building. On Otherworld, Brian storms into Roma's room, prompting her to confirm that Merlin is dead, and that she placed a jinx on Brian to encourage him to work with Excalibur. Angry at being manipulated, he demands that that she lift it, then declares he's going home. On Earth, Technet negotiates a deal with the newly-arrived aliens, joining their mercenary group. Now technically no longer Technet, they're free to leave Earth, whom the aliens declare will be destroyed in 78 hours. Shortly after they depart, Meggan & Rachel return, followed by Brian and Nightcrawler begins to fill them in on recent happenings, while in Ireland, Kitty, alongside Alistair, discovers a completely enclosed underground chamber, inside of which a human-sized body is moving around.

Firsts and Other Notables
Cerise, who will eventually join the team and enter into a romance with Nightcrawler, appears for the first time this issue. Presented here as a generic alien, I believe she'll eventually turn out to be related to the Shi'ar in some way. Her schtick at this point is that she goes into a lot of detail about herself and her power whenever she's introduced to someone new (she repeats the dialogue in the screencap below verbatim). . 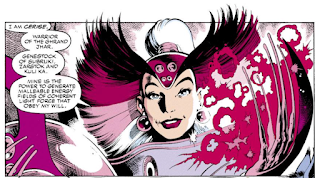 This issue reveals that Roma placed a "blunder jinx" on Captain Britain in an effort to make him less effective as a solo hero and thus more willing to work with Excalibur, explaining some of his screw-ups whenever he operated on his own (incidentally, I have no idea who the disguised Captain Britain Corps member who tells Brian all this is, but at this point, I'm assuming Necrom). 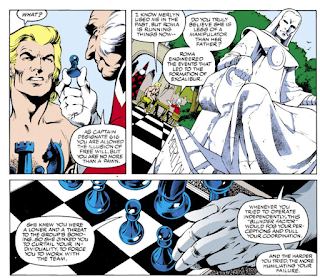 The Blunder Jinx is part of a larger reveal that shows how Roma manipulated the various characters to come together in the first place, thus explaining some of the inconsistencies found in the initial launch of the series, such as how Phoenix escaped Mojoworld and why she ended up in England of all places. 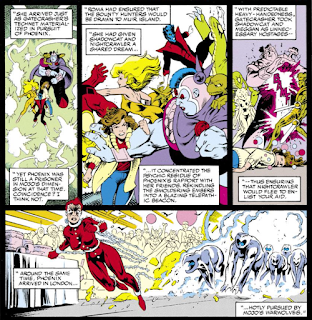 It's also established that Roma, through Saturnyne, put the contract out on Phoenix that Technet was given simply to get Technet involved so they'd prevent the Warwolves from recapturing Phoenix after she escaped Mojoworld, which is why Saturnyne didn't care when Phoenix showed up in Otherworld at the end of the "Cross-Time Caper", and why she recently rescinded the contract with minimal fuss.

Roma says that she wanted Excalibur to form to challenge evil, but doesn't know specifically what evil. 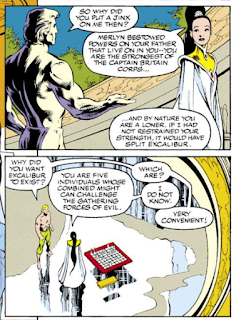 In addition to re-contextualizing and slightly retconning the early days of the series, this is also the issue that effectively removes the Possession oneshot from continuity, revealing that everything which occurred in that issue was a hallucination someone caused Captain Britain to experience for some reason. 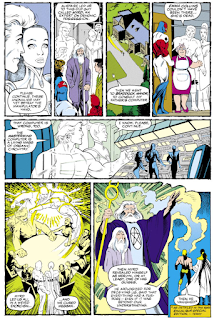 After hanging around the lighthouse since the contract on Phoenix was lifted and serving as Nightcrawler's "N-Men" (and being stuck on Earth even longer than that), Technet departs this issue, having negotiated a new contract with a alien company that briefly appears on Earth via the lighthouse. This is the last we'll see of Technet, I believe, until their appearance in the final issue of the series. 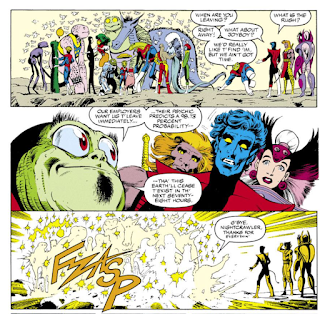 A Work in Progress
Kurt and Brian make amends this issue, over the whole "breaking Nigthcrawler's leg in a jealous rage" thing. 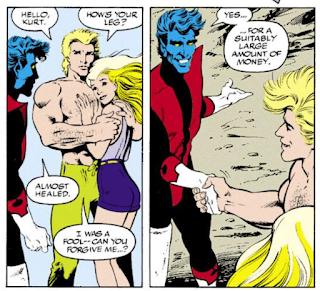 Austin's Analysis
Alan Davis continues to pull together threads, bringing 4/5 of the team back together on the same page, finally (mercifully?) writing out Technet, getting them out of the way for whatever is coming next, putting to bed the feud between Nightcrawler and Captain Britain, and catching up with Kitty's trip to Ireland. Remarkably, he does all this while also (rather aggressively but understandably) retconning out the entirety of the not-very-good-at-all Possession one-shot, and also completely re-contextualizing the beginning of the series, using the revelation that it was all part of Roma's master plan to explain away some of the inconsistencies and answer lingering questions about the formation of the team. It's the kind of retconning of history that, when left to carry a story, can be tedious and frustrating, but Davis deploys it so elegantly here, almost as an afterthought to the more immediate plot machinations and characterization happening in the issue, that it works.

Next Issue
Tomorrow, Wolverine gets wild with Mystique in Wolverine #51. Next week, X-Men action figures!