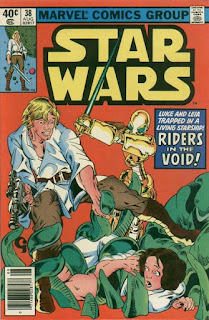 In a Nutshell
Luke & Leia encounter an extragalactic ship and its strange captain.

Plot
Attacked by Imperial ships in the middle of a supply run, Luke & Leia jump to Hyperspace to escape, but damage to their ship causes them to end up in the starless void beyond the galaxy. Suddenly, a massive, glowing organic ship appears, and swallows their craft whole. Exploring the ship, the pair separates, and Luke duels with some kind of training robot before the ship opens a hole into space, nearly sending Luke & Leia to their deaths. But their love for another speaks to the captain of the ship, the last survivor of a massive war, who has become fused to the ship and its computer. The captain brings them back to their galaxy, appearing before the Star Destroyer that attacked them. The Imperials attack the strange ship, but the captain fights back, easily defeating them. With the area safe, Luke & Leia reboard their vessel, and the captain, who finds this galaxy too reminiscent of what happened in his own past, returns to riding in the void.

Firsts and Other Notables
This is an inventory/fill-in story, slotted in when circumstances dictated pushing back the start of the Empire Strikes Back adaptation by a month. It is drawn by Michael Golden, who is best known for runs on the similarly-licensed Micronauts series and The 'Nam, as well as drawing the first appearance of Rogue in Avengers Annual #10. Golden also gets a plotting credit for this issue, and colored it as well.

As an editorial box on this issue's letters page explains, this story was necessitated by an upcoming line-wide format change and a distribution policy that required Marvel to submit all issues in story in the same format. As a result, they had to push back the start of the Empire adaptation to accommodate the change. 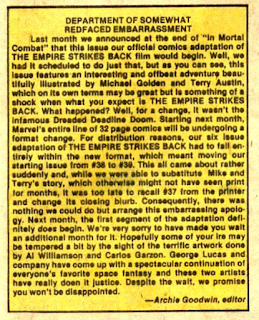 This issue finds Luke and Leia thrust into the "void" a starless location on the outside of the known galaxy, where they encounter a ship composed of organic technology, which is eerily similar to the later plotline from the New Jedi Order series of novels, involving the Yuuzhan Vong (an extragalactic species which used organic technology and spent millenia crossing a massive spatial void to journey from their galaxy to "main" galaxy). However, no attempt was ever made to link this issue to that storyline, and now "New Jedi Order" has been rendered by non-canonical as well. 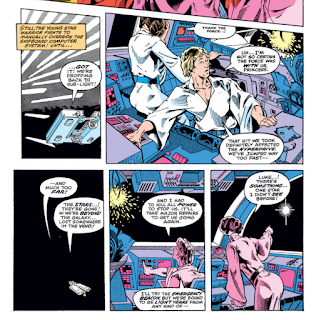 A Work in Progress
Being a fill-in story, Luke is back in his familiar white farmboy attire.

Austin's Analysis
I say this as someone who has come to really like and appreciate Infantino's art in this series, but this issue features hands down the best art to appear in the book yet. It's simply bolder and more modern looking than anything before it, and it's no wonder this issue remains highly regarded despite being an inconsequential fill-in. The story is fine, the kind of Twilight Zone-esque tale on the human condition that short science fiction does so well, and the idea of organic spacefarers from outside the known galaxy takes on interesting meaning in light of later (but now equally non-canonical) developments in the Star Wars universe, but the main hook here is the art, which rises so far above the level of typical fill-in art, it's enough the excuse the series waiting an extra month get to the Empire adaptation.

Next Issue
The Empire strikes back!