Force in Focus: The House of Tagge

One of the more engaging elements in the (roughly) first third of Marvel's original Star Wars series has been the House of Tagge, a family of wealthy mining industrialists with connections to and enough money & power to rival the Empire, along with at least a few personal grudges against notable characters. Yet every time one of them would pop back up in an issue after a few away, I'd have to run to Wookiepedia to look up which Tagge it was and how they related to the current canonical one. Now, with the Tagge family having mostly exited the stage in anticipation of the Empire Strikes Back adaption, I'm going to try to lay out all the Tagge family info in one place, for my benefit as much as yours.

Canon
Let's start simple: according to current Star Wars canon (which consists of the seven films, The Clone Wars and Rebels TV shows, a handful of recent novels, and all comics published by Marvel since their reacquisition of the license), there is only one Tagge, General Cassio Tagge. 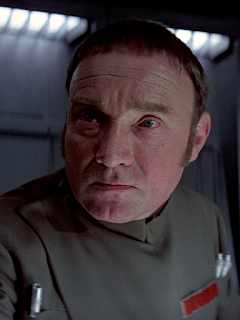 He appeared in A New Hope (played by Don Henderson), and was considered to have died aboard the Death Star, until Darth Vader #1 revealed he survived (having left the station before it exploded - the character not appearing in scenes set aboard the station in the latter half of the film) and was elevated to the rank of Grand General by the Emperor, and given personal control over Darth Vader for a period of time.

Legends
Outside of official canon, General Cassio Tagge is but one of four Tagge brothers, who along with their sister comprise the notable members of the family in the comic. In the continuity of Marvel's original comic book series, Cassio did indeed die aboard the Death Star. 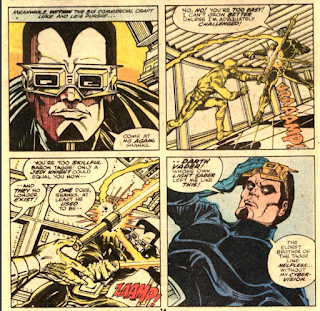 The chief Tagge dealt with in the comic book, Orman is the eldest Tagge brother and leader of the family, along with its massive industrial empire and fleet. He had reservations about Cassio joining the Imperial military, and developed a rivalry with Darth Vader (whom he believed threatened the Tagge family's connection to the Empire). Eventually, Vader, who felt the baron was overstepping his bounds, took Orman's eyes, resulting in him wearing cybernetic replacements and crystallizing his hatred for the dark lord. Following the destruction of the Death Star, Orman's became chiefly concerned with destroying the Rebel Alliance before Vader could, as a way to discredit Vader in the eyes of his master and gain increased favor with the Emperor, after which Orman intended to face Vader again, and defeat him. In the end, however, Orman is outmaneuvered by Vader, who manages to corrupt Orman's sister Domina before tricking Luke Skywalker into killing him. 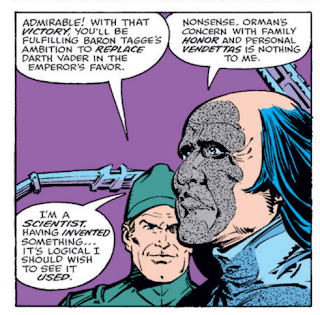 The next eldest brother, Silas is a scientist and tasked with overseeing the technological developments of the Tagge family's holdings. Unlike his older brother, he is chiefly concerned with science for the sake of science, and though Orman prevails on Silas to use one his inventions, the devastating Omega Frost, in a scheme to destroy the rebels, Silas remains chiefly concerned with simply making the device work, and seeing it in action. In the end, though, Silas is killed after Luke disables the Omega Frost, allowing a Rebel fleet to directly attack the Tagge ships. 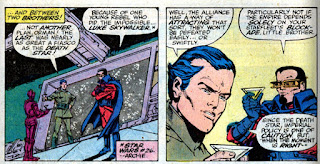 The youngest Tagge brother, Ulric followed in Cassio's footsteps and joined the Imperial military, As part of his schemes, Orman managed to get his brother promoted to General, and he helped Orman in his blockade of the Rebel base on Yavin Four following the destruction of the Death Star. After the apparent deaths of Orman and Silas, Ulric became the new Baron Tagge, a promotion Darth Vader supported on the grounds that the Tagges henceforth no longer interfere with him. Vader was also able to manipulate Ulric into helping him corrupt his sister, Domina. 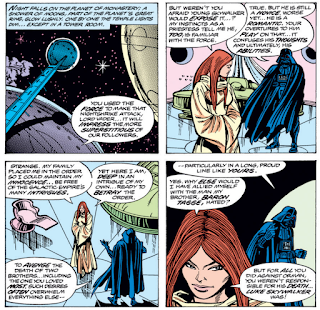 The youngest of the Tagge siblings, Domina was sent to the planet Monastery to join the Order of the Sacred Circle by her brother Orman, who hoped to maintain her innocence and prevent her from being married off to an Imperial family or otherwise becoming tainted by the war. However, as part of his revenge on Orman, Darth Vader corrupted his sister, telling her that Luke Skywalker was responsible for Orman's death and possibly even giving her some training in the Dark Side of the Force. In the end, Domina saw through Vader's manipulations, and blames him equally for her brother's death, but the innocence Orman so cherished is long gone.

Behind the Scenes
Change in drafts during the shooting of A New Hope led to confusion in later adaptations of the story between General Tagge and Admiral Motti (the Imperial officer who is most dismissive of Vader and gets Force choked as a result). As a result, Ulric Tagge initially more closely resembles Admiral Motti (as seen in the film) than the film's General Tagge.

Though Cassio remains the only canonical Tagge family member at this time, Orman did manage to sneak into the previous pre-Disney canon (which generally held the original Marvel series to be non-canonical, except for the elements of it that got specifically referenced by later stories), via mentions in various guide books, role playing games, and online articles.
Newer Post Older Post Home
Posted by Austin Gorton at 12:00 PM