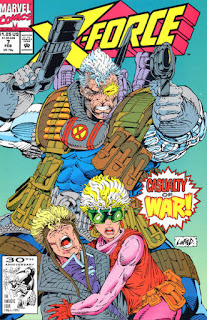 "Under the Knife"/ "X-Tenuating Circumstances"
February 1992

In a Nutshell
Cannonball is killed by Sauron.

Plot
First Story: As Siryn, Warpath & Shatterstar battle Toad, Blob & Sauron, Masque, Thornn & Phantazia infiltrate X-Force's base. Entering the hangar, they find the rest of the team waiting for them. Outside, Shatterstar locates a weapon cache and helps Siryn defeat Toad, while Blob falls into a ravine, and the three race back to their base. Inside, Feral & Thornn fight one another, while Cannonball flies into Phantazia, which disrupts his blast field. As Sauron enters the base looking for a new opponent, Cannonball approaches him, but his blast field is unable to prevent Sauron from skewering him through the chest with one of his wing talons, much to the horror of Boom-Boom, who cries out that he's dead.

Second Story: Dispatched to investigate reports of smuggling activity, Weapon X infiltrates a cabin in the Canadian woods and battles a group of soldiers before encountering members of the Mutant Liberation Front.

Firsts and Other Notables
Cannonball seemingly dies this issue, run through by Sauron (who now has some kind of talon on his wings, apparently) after getting his protective blast field scrambled by Phantazia. This marks the beginning of the High Lord subplot, in which it's revealed that Sam is one of a race of immortal mutants known as Externals, and that Cable's primary motivation for coming to this timeline from the future was to guide Sam's ascension. At least, that's the story until Liefeld leaves the book and, over time, all of that is mostly either retconned out or simply ignored. 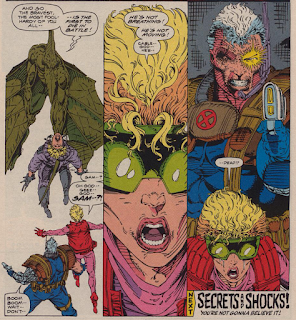 This issue reveals that Feral's first name is Maria, that Thornn is her sister (and named Lucia), that the pair come from some kind of Spanish-speaking background, 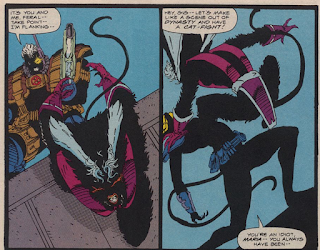 Phantazia finally does something, and speaks, this issue. We also find out that she has some kind of ability to disrupt electromagnetic systems, and is, at least at times, just a head and floating cloak, since Cannonball is able to fly straight in and be enveloped by her cloak. 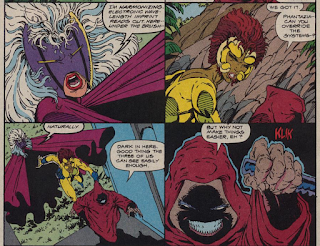 Toad, arguing that he's more than just a sycophant, shows off a new ability to secret a sticky resin from his fingers, something he wasn't able to do in previous appearances. 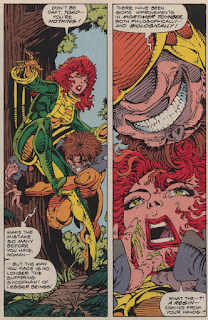 A backup story in this issue features Kane, the new Weapon X introduced in issue #2, investigating reports of a smuggling operation that brings him into conflict with MLF members Forearm, Wildside and Sumo; it will continue in the next issue, and eventually dovetail with events in the series' main storyline. 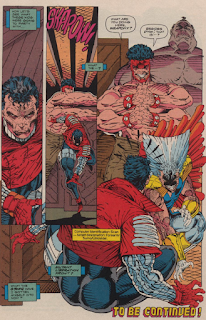 A Work in Progress
This issue opens with a discussion of the Brotherhood including the word "evil" in their name. 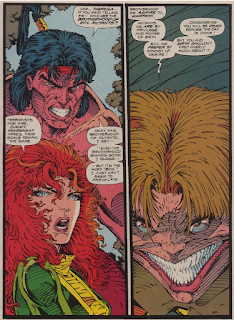 Masque, looking more and more like an evil dwarf throughout the issue, comments on the state of Cable's tech. 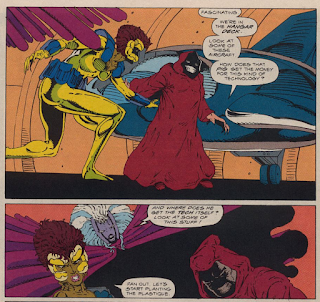 Cables berates Masque for not leaving well enough alone and attacking X-Force's base a second time, a reference to his previous attack in New Mutants #100.

The Grim 'n' Gritty 90s
Just when you think Shatterstar couldn't be anymore 90s, he shows up in a vest with a bug gun and more pouches.

501 Genes
Liefeld turns in a not terrible partial group shot of the team (partially marred by the exclamation point panel on the other side of the page), which I believe gets used in some promotional art at some point.

Blob is defeated off-panel when he falls into a ravine while fighting Warpath, another apparent case of Nicieza's script covering for Blob's complete disappearance from the fight halfway through the issue.

It's in the Mail
Augie DeBlieck Jr., a writer for Comic Book Resources, has a letter in this issue's letter column.

Austin's Analysis
This is probably the most decompressed issue of this series yet (which is saying something), as it's essentially an issue long fight scene and nothing else. Nicieza manages to sneak in a little bit of background for Feral as she fights her sister, Toad gets a new power, and there's a brief discussion about the use of "evil" in the Brotherhood's moniker, but otherwise, this is just pure Liefeld slugfest, and thus takes all of five minutes to read. Even the big cliffhanger ending, which does, briefly, lead to some development of the mysteries surrounding Cable, is ultimately pointless given the benefit of hindsight, since everything it leads to more or less gets rolled back once Liefeld is gone. The brevity of the issue isn't helped by the presence of the backup story, which not only leads to a shorter main story, but is also nothing but fighting, so it only adds a minute or two to the total read time, and offers up little to break the stylistic monotony of the issue overall.

Next Issue
Tomorrow, X-Factor battles the Nasty Boys in X-Factor #75. Next week, X-Men #5 and Excalibur #47.