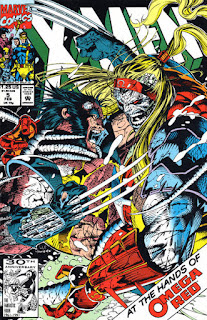 In a Nutshell
Maverick debuts as Wolverine battles Omega Red.

Plot
Alerted to the presence of Omega Red by Cerebro, the rest of the X-Men scramble in pursuit. Meanwhile, Gambit, Rogue, Beast & Jubilee manage to escape from the Hand just as the rest of the team arrives on the scene, but they're unable to rescue Wolverine. Elsewhere, Wolverine battles Omega Red, overseen by Matsu'o, Fenris, and Dr. Cornelius, who are trying to stimulate Wolverine's memory regarding the whereabouts of the Carbonadium Synthesizer. However, they, in turn, are being watched by a mysterious figure as well. Back at the X-Mansion, the X-Men split into squads, with the Gold team proceeding to meet with the Hellfire Club as planned while the Blue team goes after Wolverine, whom they've tracked to Berlin. A day later in Berlin, Wolverine manages to escape his restraints and flees, having flashes of a similar scene involving Omega Red in his past. He dives out a window and is rescued by Maverick, who had been waiting to make his move. Maverick then detects the arrival of the X-Men, just as Wolverine collapses into unconsciousness. In Malibu, Lila Cheney is trying to revive Dazzler's memory of the X-Men when Longshot suddenly appears, followed by Spiral. She tries to capture Longshot, but Lila teleports him & Dazzler away, as Mojo watches.

Firsts and Other Notables
This issue is the first appearance of Maverick, the latest entry in the hot new category of "vaguely bionic mysterious characters with big guns". As of this issue, he is shown to have a past with Wolverine (even if Wolverine doesn't fully remember it) and it will eventually be revealed that Maverick was also part of the Weapon X project (and that he's a mutant with the ability absorb kinetic energy without harming himself. So like Strong Guy or Sebastian Shaw, but without the ability to turn that energy into additional strength). As far as mysterious new 90s era characters go, Maverick is a modest success story; he's no Cable or Deadpool, but he will be featured in an upcoming backup story, eventually get his own short-lived solo series in the mid 90s, and be featured in Frank Tieri's Weapon X series in the 00s. 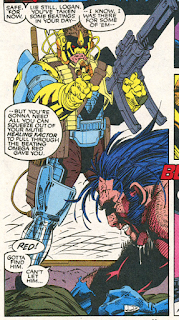 A brief flashback sequence features Cold War era Wolverine, Sabretooth and Maverick battling Omega Red. That loose affiliation of characters who later went through the Weapon X project performing missions together will eventually come to be called Team X (though only in outside sources - comic titles and whatnot - and never, I don't believe, within the story itself) and appear in future flashbacks and a couple of one-shots. The black jumpsuit with yellow accessories that Wolverine wears here will become something of an iconic look for the character in stories set in that time, and will eventually be featured as an action figure. 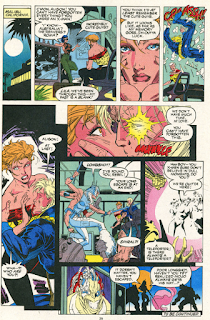 Spiral also appears briefly, pursuing Longshot. Last seen in Uncanny #256, she'll turn up in the next three issues of Wolverine.

In an appreciated touch, this issue confirms that all the events of this series up to this point took place prior to Uncanny X-Men #281, as a double-page splash shows the combined X-Men discussing splitting up, with the Gold team in their formal attire from the beginning of #281. Byrne, however, slips up, having Xavier declare he'll remain at the mansion in telepathic contact with both teams despite having established in Uncanny #282 that he and Forge were playing chess with a telepathic dampner in place while the X-Men were at the Hellfire Club (Byrne even sets up that chess match in this issue, making the flub even moe curious). 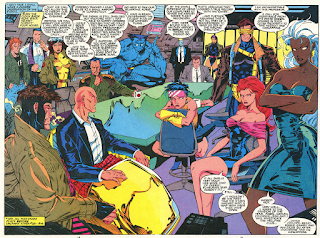 Banshee departs this issue to go after Moira, and while the length of his intended absence is unclear, this effectively marks the end of Banshee's second tenure with the X-Men (which goes back to Uncanny #253, albeit without an official team around him at that time), and though he'll eventually be back, first popping up here and there in random X-issues and then in the lead-up to "Phalanx Covenant" and the launch of Generation X (where he'll maintain a consistent presence for the life of the series), this is also pretty much it for Banshee as a formal member of the X-Men. 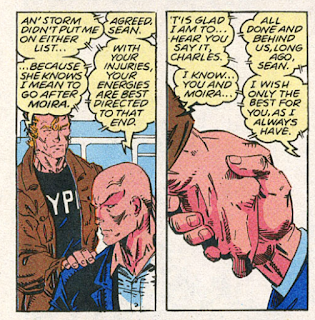 This issue confirms that Matsu'o and Fenris' plans for Wolverine, specifically their acquisition of the carbonadium synthesizer, is a part of the Upstarts competition, with the immortality prize once again suggested as the ultimate goal (which Fenris is hoping to transfer to a new Reich).

A month after Professor Thornton and Carol Hines returned in Wolverine #50, Dr. Cornelius, the third significant antagonist from "Weapon X" returns in this issue, in the employ of Matsu'o and Fenris, helping them plumb Wolverine's memory for the C-Synthesizer. 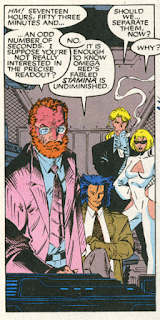 As the X-Men leave, before Forge approaches him to play chess, Professor X can be seen looking through files labeled "Project Xavier"; this will be teased in a few upcoming issues, and kind of addressed in issues #12-13, but mostly gets dropped in the wake of Lee's departure. 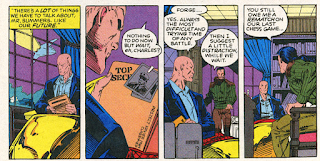 The top of the first page features a synopsis of what the X-Men are all about and who is on the team; I can't remember how long this particular iteration sticks around.

A Work in Progress
Cerebro detects the presence of Omega Red and alerts the rest of the X-Men, the first time in forever the machine has detected a new mutant.

Though he remains with his designated squad after the team splits up mid-issue, Colossus is on hand to help rescue the X-Men captured by the Hand last issue, an example of how the team will remain fluid across both titles despite the squad division.

Jubilee is initially told to stay behind while the Blue team goes after Wolverine, but Psylocke vouches for her experience with the Hand, a reference specifically to the events of Uncanny #256-258, but more generally, of Psylocke and Jubilee's pre-"X-Tinction Agenda" time together, an appreciated nod to the characters' past history.

Another apparent case of Byrne's preference for the original X-Men shining through: Maverick refers to Rogue, Gambit and Psylocke a the junior league, while Beast and Cyclops are the big kids. 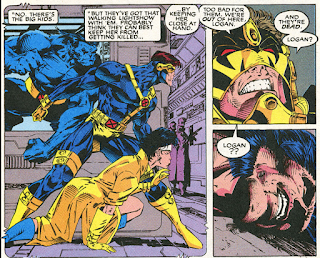 The Grim 'n' Gritty 90s
Wolverine's flashbacks in this issue are said to take place thirty years ago, which in 1992 would have placed them in Berlin at the height of the Cold War.

In addition to Rogue and Gambit's now-usual leather jackets, both Cyclops and Psylocke done X-labeled jackets this issue.

Artistic Achievements
Byrne does some nimble scripting to explain why Psylocke responded to an alarm in her bathing suit. 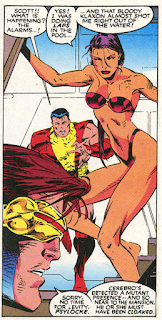 The X-Men discover Wolverine's mask in the wake of the Hand's defeat, though it's the orange-and-tan mask, not the mask of the costume he was actually wearing last issue. 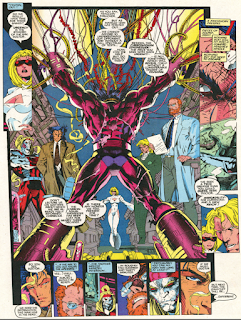 In an even more egregious mistake, Wolverine at one point appears holding a mysterious canister, which Omega Red seemingly wants. He runs from the villain, eventually diving out a window and being rescued by Maverick, after which the canister disappears. But the location of the story's MacGuffin (the carbonadium synthesizer) is what the villains are after (issue #7 will reveal where it is, and it's not in this building), so it's unclear what this canister is, how Wolverine got it, or why Omega Red wants it (it seems like Lee maybe got mixed up and drew in a physical MacGuffin before remembering that the whole point of capturing Wolverine was to find out where the MacGuffin is). 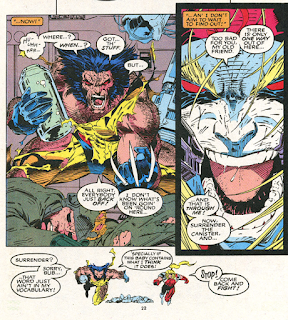 The Best There is at What He Does
Dr. Cornelius is able to give Wolverine some kind of drug that helps him remember his past, allowing for the periodic flashbacks that permeate this story, though despite his renewed interest in discovering his past, Wolverine never really tries to find out more about this drug. 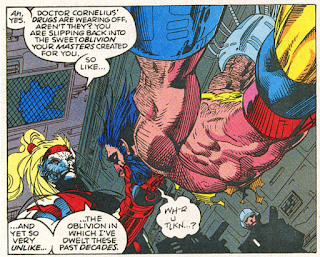 It's in the Mail
Responses to letters in this issue tease the return of Hiro (Iceman's girlfriend's grandfather's cybernetic ninja solider) over in Uncanny (which happens in issues #289-290). The next X-book crossover story is also mentioned, titled "Sins of the Father", which becomes "X-Cutioner's Song".

Austin's Analysis
There's two really nice, almost Claremontian touches to this issue. The first is that Lee took the time to establish a timeline for the two X-Men books, revealing in this issue (via art and dialogue, not just a footnote) that the events of this series thus far all take place before the start of Uncanny X-Men #281. It's not quite "writing Wolverine out of the series for months so he can star in a limited series", but it's close, and shows a remarkable commitment to continuity for the era. The second thing is the return of Longshot and Dazzler, Presumably, Lee has some affection for the characters (they'll feature in the last story he draws for the book) and that's why he bothered to address their long absence and tease a resolution to Longshot's lingering plot thread, but even though it likely wasn't the intent, it still reads like Lee is working off some kind of outline he worked out with Claremont - the writer may be gone, but Lee is, seemingly, still willing to tie up his dangling threads (intentionally or not).

At the same time, this issue also shows an increased sloppiness in the art and plotting, with clothing changing from panel-to-panel and the weird bit with Wolverine suddenly holding some kind of heretofore un-referenced canister and proceeding to dive out a window with it, after which the canister disappears as suddenly (and without comment) as it first appeared (it's also not clear why the Hand bothered to abduct the non-Wolverine X-Men last issue, other than to setup a fight scene for this issue). Whether due to the strain of plotting and penciling, or having a scripter less willing to cover for his mistakes, or a result of Lee's apparently scattershot approach to drawing pages (ie drawing them in bursts, out of order), it is unfortunately indicative of things to come, as the art across the X-books gets increasingly sloppy (or inked by multiple inkers, or drawn outright by fill-in artists) in the run-up to the Image Exodus. As such, now two issues removed from Claremont's departure, this can be read very much as a bridge between what's come before, and what's to come.

Next Issue
Tomorrow, Cerise debuts in Excalibur #47. Friday. Mystique guest stars in Wolverine #51. Next week, we take a look at X-Men action figures.